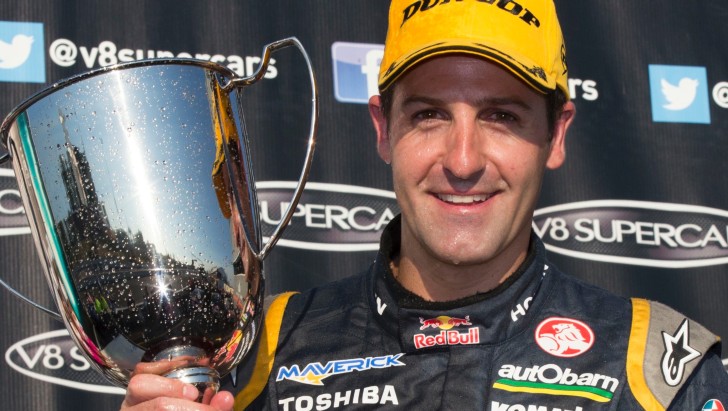 Five-time V8 Supercar Champion Jamie Whincup blasted his rivals off the Hidden Valley circuit at the SKYCITY Triple Crown in Darwin, sending the clearest message yet that he is far from done.

Whincup put aside his 'poor' start to the year - that had netted three wins and four ARMOR ALL Pole Positions before today - as he and Red Bull Racing Australia teammate Craig Lowndes put together straight 1-2 finishes in the Top End.

Both made invaluable ground on Championshipleader Mark Winterbottom in the opening two sprint races of the SKYCITY Triple Crown. Winterbottom finished sixth in both races.

"It's certainly refreshing, we had plenty of room for improvement without doubt after our performances of the past few months," Whincup said.

"People often say it quite cheaply but everyone has been burning the midnight oil and it paid off today. The question is can we keep it going for the rest of the year ... I'm not going to get into that debate but we certainly had a good day today.

"Fingers crossed that the future is a bit brighter than what it was."

Whincup said he had not felt confident very often this year, until today.

And with the SKYCITY Triple Crown Trophy for winning all three races in Darwin never having been won, Whincup is eying the prize.

"We have an opportunity, no more or no less," he said. "It would be massive to be honest. It's been a trophy that has been around for a long, long time and no-one has been able to take it home.

"That would be serious bragging rights if I could do it today for sure."

While the defending V8 Supercars Champion has not had the success he would have liked so far this season, sitting fourth on the table, he has closed the gap to leader Winterbottom to 165 points, while Lowndes is just 65 adrift after his two second places.

Whincup and Lowndes virtually ran their own races in first and second with the exception of a first race challenge for Lowndes in the shape of van Gisbergen.

In the second race of the day Garth Tander had a great jump from the start, catapulting up to third, while Winterbottom went back down the order. Coulthard passed the HRT Commodore for a podium finish, while he also sits third in the Championship.