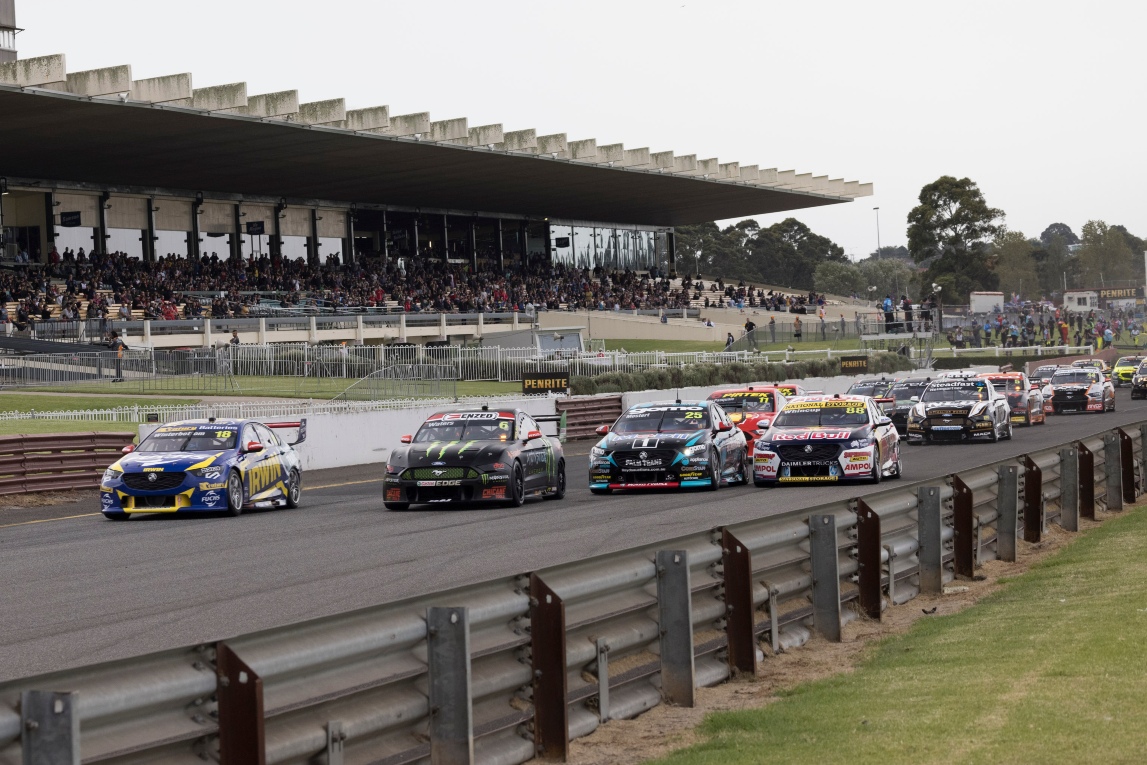 The fastest two drivers in practice and qualifying, Chaz Mostert and Cameron Waters were beaten to victory by a driver who started 17th.

Heading to next month’s Beaurepaires Tasmania SuperSprint, Shane van Gisbergen’s rivals will still be questioning how he won Race 3 from the ninth row of the grid.

The Penrite Oil Sandown SuperSprint marked the first event of the year running on soft tyres, with the compound’s degradation a talking point across the weekend.

The last time a driver won from further down the grid, Scott McLaughlin in Perth in 2018, the race was an 84-lap, 200km epic. 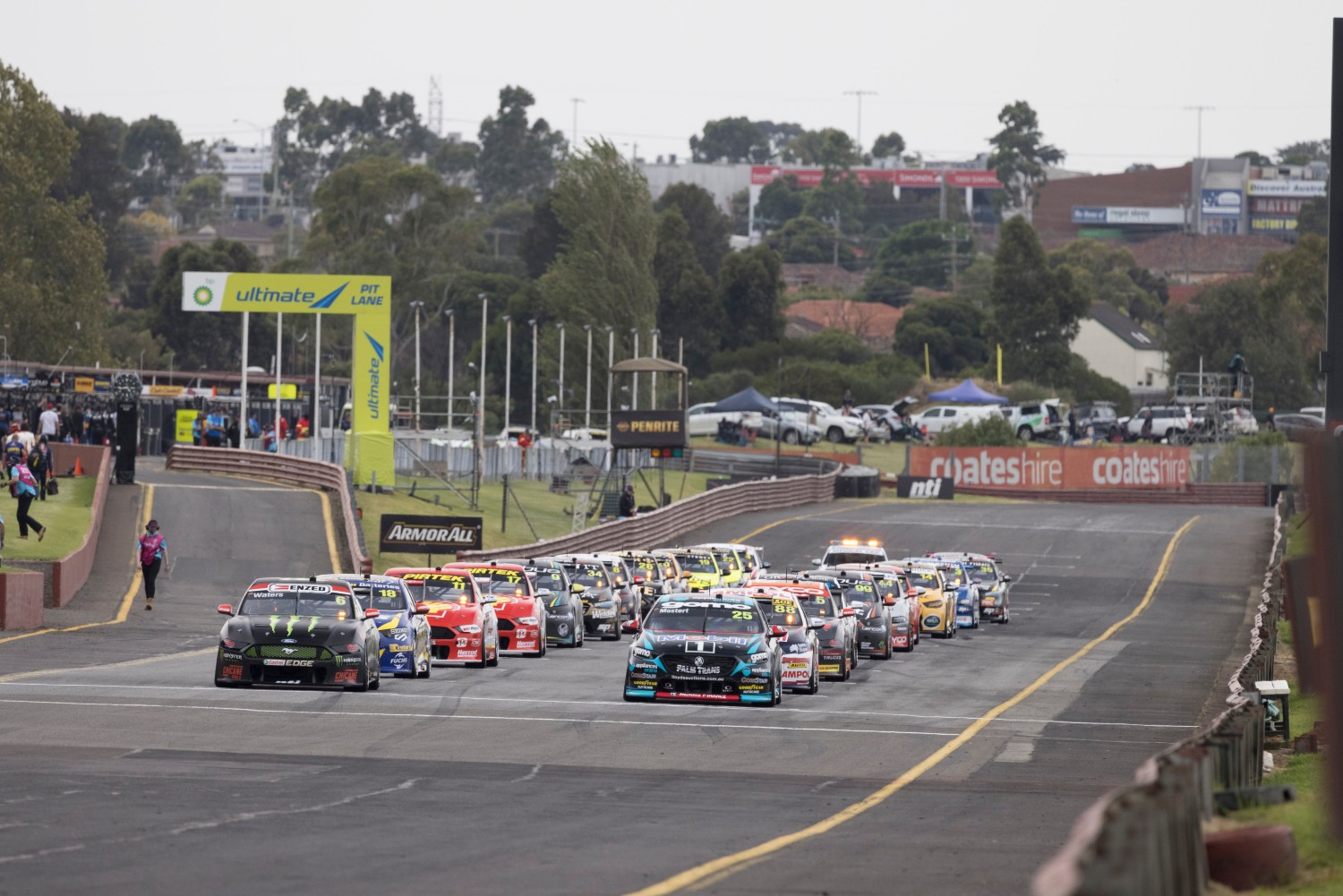 The calm before the storm

The seeds were sewn to Mostert’s demise when he dropped from P1 to P4 by Turn 4.

After an early BP Ultimate Safety Car, Waters led on the lap 7 restart. On the next lap, Mostert pitted for rears only, with Walkinshaw Andretti United attempting an undercut.

To the time of Mostert’s stop, Waters held a 0.8s lead over Team 18’s Mark Winterbottom, who was chasing his first win since 2016.

To the time of Waters’ stop on lap 18, Mostert was nearly 32 seconds behind, and emerged with a 4.1s lead with 16 laps remaining.

From there, Waters shaped as the biggest threat to Mostert, whose tyres began to fade.

“That’s the game we play, isn’t it? We’re catching [Mostert] between three and five tenths a lap,” Tickford CEO Tim Edwards said on the broadcast.

WATCH: LEADERS DIVE INTO THE LANE

“I think we’ll catch him; can we pass him? I don’t know… it’s about managing the tyres for the duration of the race.

“We expect the tyre deg to be a bit higher than we anticipated… it’s higher than it has been in the past. You have to manage that.

“Chaz is coming back to us, but it’s just one of those games you play.

“You fight for track position; I think we did the more standard strategy.

"Most people did what we did, Chaz went aggressive, he needed to try and to get back to his P1 that he started the race from.”

Undercuts are effective, for the most part; Mostert regained the track position he lost in the opening seconds, with Shell V-Power Racing Team’s Anton De Pasquale spitting Jamie Whincup and Winterbottom. 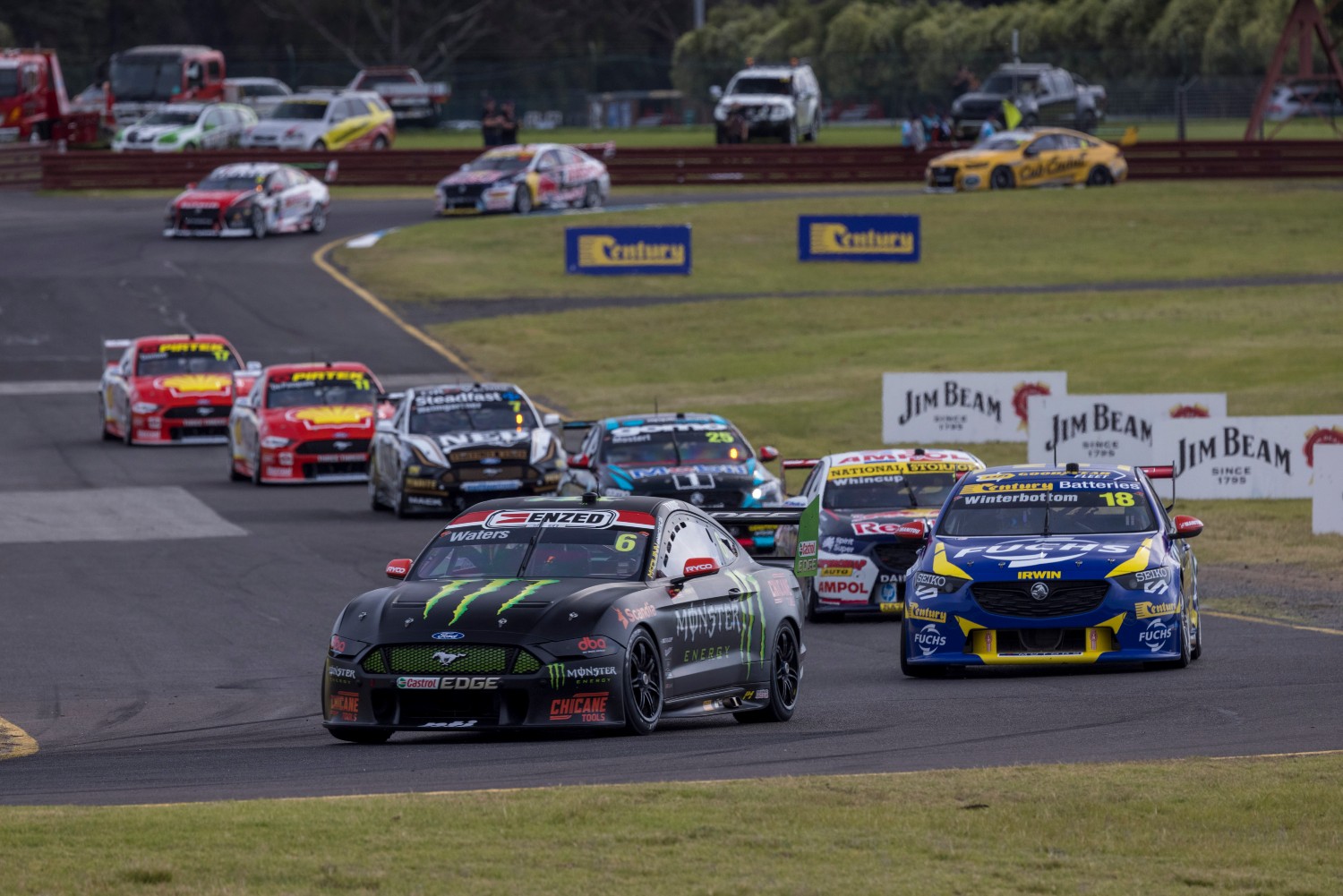 Waters leads the early stanza of the race

At Sandown, the driver made the difference; a strength to van Gisbergen’s dominance has been balancing tyre life with race pace.

After the #97 Red Bull Ampol Racing entry pitted on lap 25, the gap to Mostert ahead of nine seconds.

It was seven seconds two laps later once van Gisbergen cleared De Pasquale, with the top three of Mostert, Waters and Whincup then covered by just 0.7s.

After he cleared Winterbottom on lap 32, van Gisbergen was three seconds off the lead.

Two laps later, as the top three bottlenecked following Waters’ overtake on Mostert for the lead, van Gisbergen cut past the #25 and #88 to scythe into second.

In commentary, Neil Crompton said: “He might, he might threaten the lead here… that would be completely crazy.” 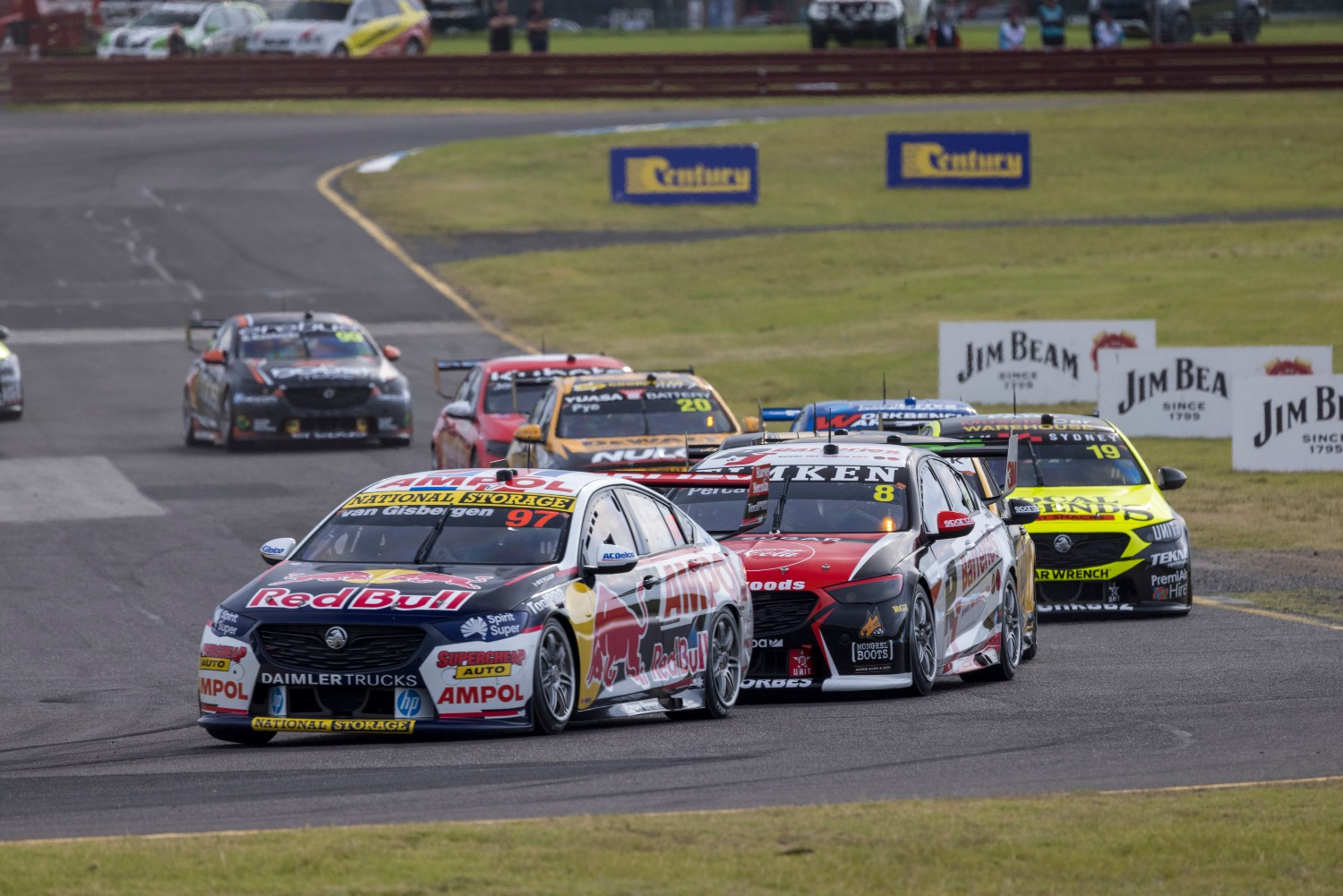 Van Gisbergen chews through the field in Race 3

Mark Skaife added: “You would have never considered, at any point, that van Gisbergen would win today’s race.

“They stopped last, they came in on lap 25, he’s got the freshest tyres.”

Van Gisbergen, on six-lap fresher tyres, completed the winning overtake at the start of the 36th and final lap.

Mostert plummeted to sixth, having been passed by Winterbottom and De Pasquale in the closing stages.

“Obviously the wrong way today,” a dejected Mostert said after the race.

“Just disappointed… to start off pole and go back to finish sixth, struggling at the end with nothing to fight for, I feel a bit defeated. 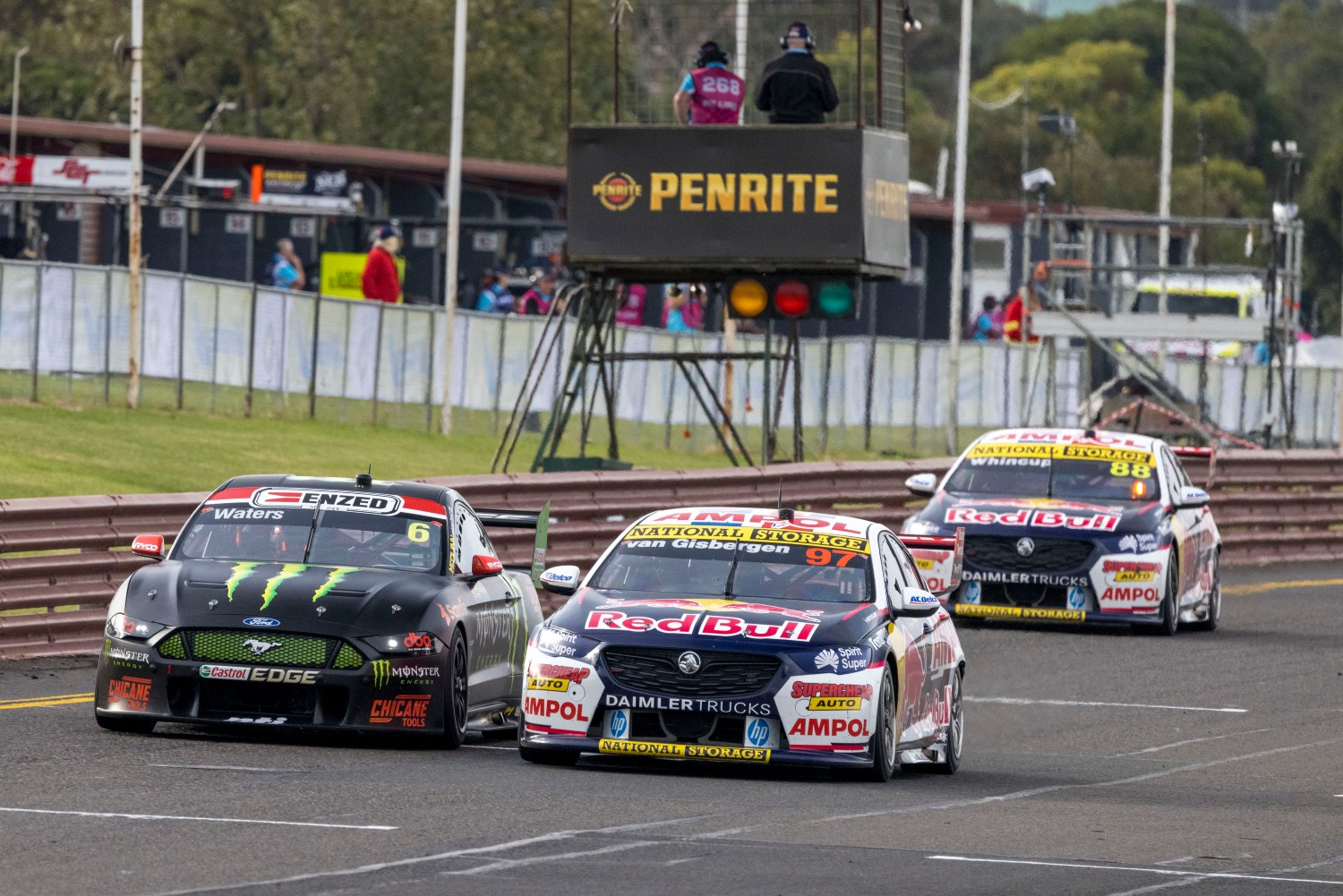 Van Gisbergen and Waters drag down the front straight

“We probably read it a little bit wrong, we thought people would dive in early, and we were the only one.

“Today, it just didn’t work out for us."

The key challenger in all battles was Waters, who clinched a second P2 finish in as many starts.

Waters led the early stanza and was only undercut by Mostert following the WAU driver’s early stop.

Perhaps what let Waters down was that every time he attempted to clear Waters, Whincup shadowed the #6 Monster Energy Mustang's every move and loomed to steal the spot.

Through it all, of all drivers who should have won the race, it was Waters, who led the leading pack into the lane, failed to clear Mostert, and didn’t have enough tyre life to hold off van Gisbergen.

Through the opening five races in 2021, Waters’ Race 3 showing was proof of just how close he is to breaching the defence of van Gisbergen, who is undefeated this season.

“Mate, that was so much fun. I would have liked to have won the thing, but I had a lot of fun then,” Waters said in parc ferme.

“I knew what Chaz was doing, so I had to truck off and get some clean laps.

“I knew I’d have a tyre advantage at the end, but every time I’d try and get a run at him, Jamie would try and pass me.

“We battled for a few laps, and it was awesome to get it done, but Shano was coming on some fresher tyres.

“Massive credit to him; he’s battling this weekend, and for him to come through and win is pretty cool.

“The car’s really fast, which is really promising… it’s nice to get some points on the board after [the Bathurst power steering failure].”

Van Gisbergen’s engineer David Cauchi, who helped Whincup to several successes across the last decade, admitted the different strategies by the Mostert and Waters helped his driver into the discussion.

“We wanted to consolidate and have a solid result, but to come away with the win, full credit to Shane,” said Cauchi, whose driver broke a 56-year-old Sandown record.

“I thought there are probably three or four guys that would actually think about doing that move, and there was one bloke that could pull it off. That was the bloke in car 97.

“We had to adapt a little bit on the fly; that lead pack went longer than we were expecting. 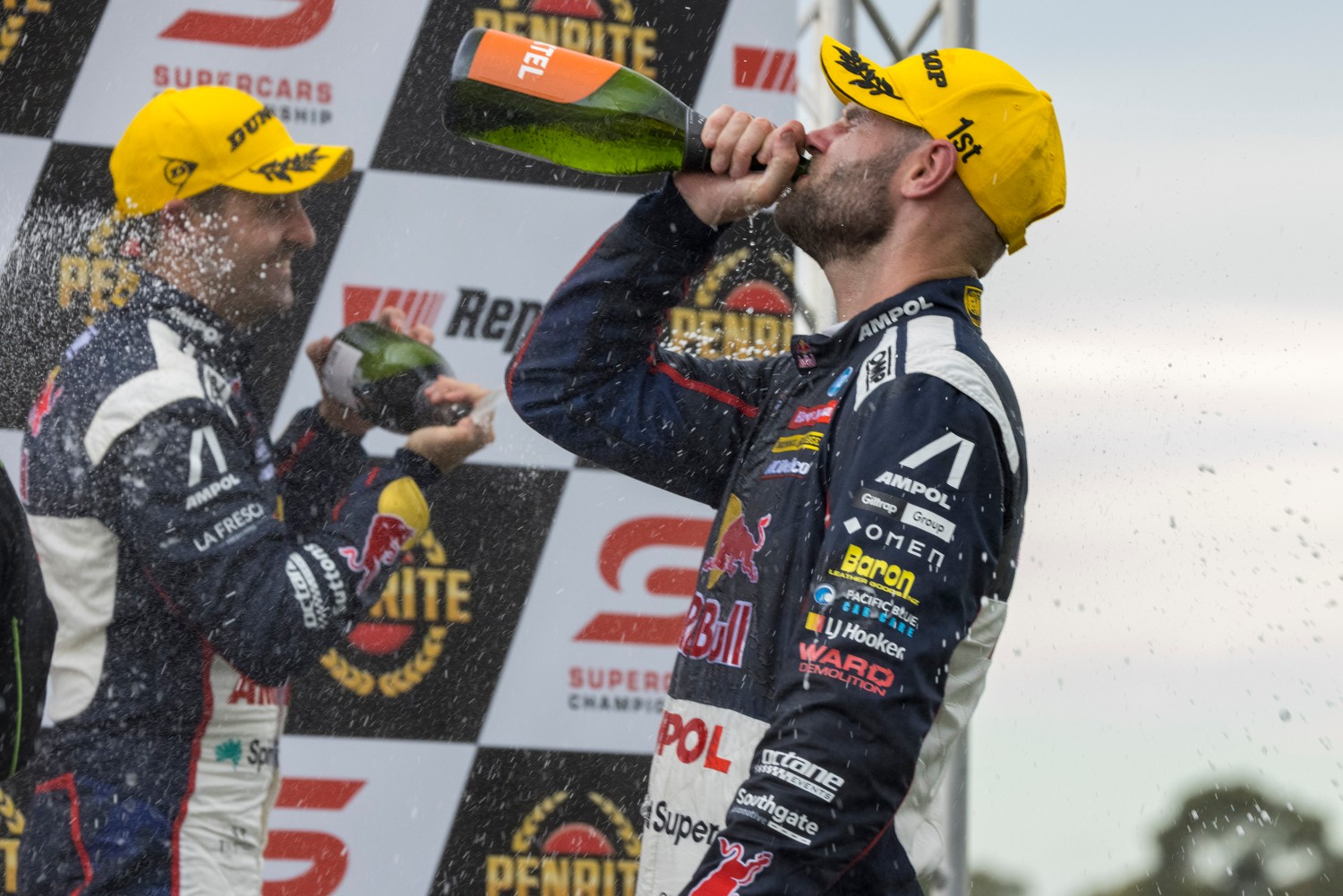 “We knew we had to do something different to where we were coming from, and Shane was going a great job, his lap times were strong relative to the cars that had pitted.

“We knew we had to go that little bit longer to give us that edge in the closing six laps.

“With Chaz pitting early, it brought those three back to us as well, so when they started fighting, it helped us.

“It all sort of worked for us.”

The Repco Supercars Championship field will resume at Symmons Plains for the Beaurepaires Tasmania SuperSprint across April 17-18. Tickets are on sale now.