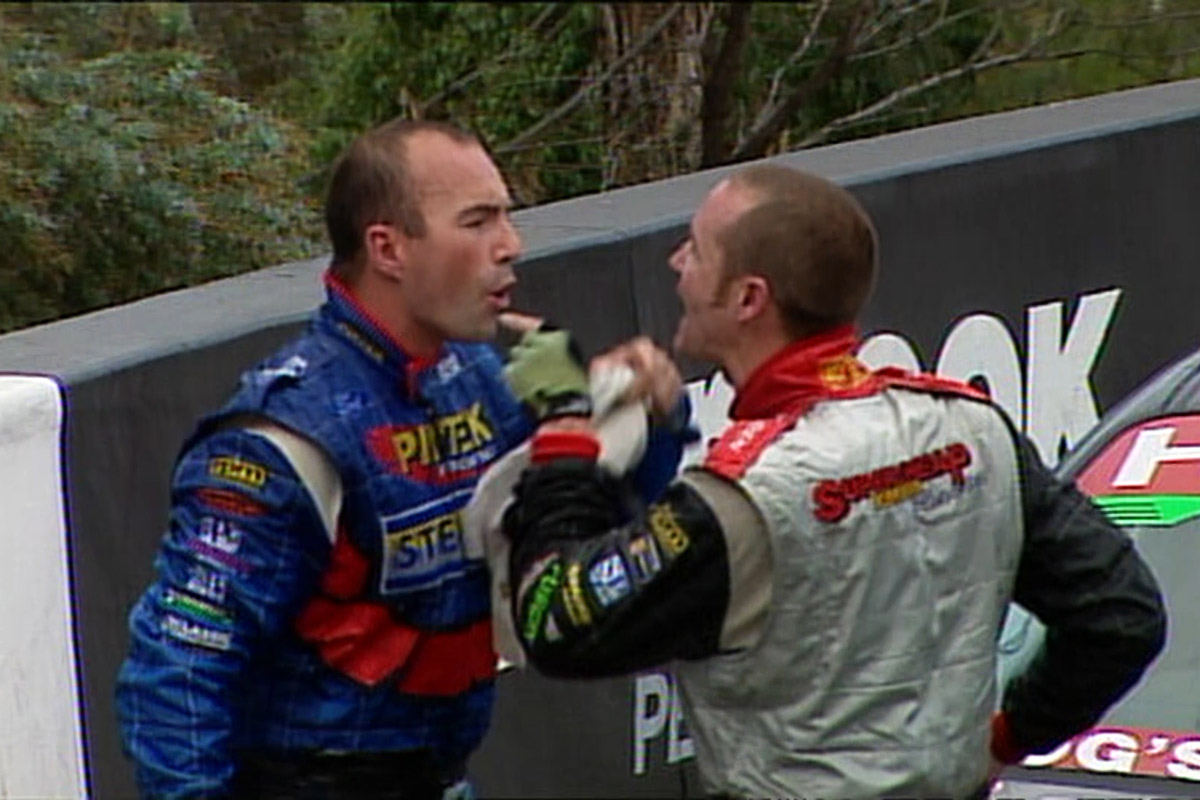 Greg Murphy has opened up on his bitter rivalry with Marcos Ambrose from the mid-2000s that most notably culminated in an on-track shouting match at Bathurst.

Few who watched the 2005 Supercheap Auto Bathurst 1000 will forget the scenes that unfolded after the high-profile Kiwi pair clashed at The Cutting while battling for fourth following a Safety Car restart on lap 145 of 161.

But Murphy and Ambrose had already once before been publicly at loggerheads.

The occasion was the championship’s 2004 visit to the Gold Coast; controversy kicked off as Ambrose allegedly brake-tested Murphy’s teammate Rick Kelly, who was a lap down, as he took the chequered flag in the Saturday race.

A pitlane confrontation would eventuate between Ambrose and the two K-Mart Racing drivers.

After taking victory a day later, Murphy would take matters into his own hands, hijacking the post-race press conference to grill Ambrose.

The heated exchange went on for some time, and Ambrose was later fined $10,000 for careless driving.

“It was a brake-test because Rick had to take avoiding action,” Murphy recalled on the latest episode of the V8 Sleuth podcast.

“I had backed off the throttle but flew straight past them both up against the wall going ‘what is going on here?’”

As for the press conference that followed 24 hours after the verbal barbs in pitlane?

“So we’re in the press conference and someone brings up about what happened the day before and he answered whatever his answer was,” Murphy said.

“I think I laughed and then I said something and it all went from there.

“But it was a very humorous and quite interesting press conference because it certainly wasn’t what he expected it was going to be and I actually absolutely had not had a plan to go in there to bring up what happened on Saturday and that whole situation.

Murphy cleared Kelly, then just 21, of any sort of poor sportsmanship that Ambrose had accused him of.

“Rick back then, so we’re talking 2004… he wasn’t smart enough to be doing anything that would have been helping me or underhanded,” Murphy said.

“He would have just been moseying around, driving along, doing his thing.

“That was the irony and the funny side of it, that he was just sitting there probably wishing that he could unlap himself but wasn’t going to do anything silly.

“So yeah, funny times. I suppose that was a bit of the catalyst moving forward for Marcos and my ongoing feud that came to a head at Bathurst 12 months later.”

There’s a confession that comes with reflecting on that 2005 fracas, too.

“I tell you right now, if I knew what was going to happen, I would have actually not been as pigheaded to try and hold my line and [would have] bailed out of that one and let him have it,” Murphy admitted.

“I got baulked heavily by I think David Besnard going into Turn 2 at Griffin’s… I lost all my momentum and that allowed Marcos to come up alongside on the run up to Turn 3.

“He had his nose ahead but there was no pass completed. I have always been quite open that I believe we both contributed to it and I was happy to take 50 percent of the blame for it because it was a goddamn mess.

“If I had my time again and I could go and bloody repeat it, knowing what has happened, you probably would bail out of it… It’s not like it was a great moment in my life and not for him either.”

Murphy did though quash the theory that he stopped on-track purely to confront Ambrose then and there.

“I didn’t try to drive it back because I thought with the whack, there’s no way she’s going to be mobile and that’s why I stopped,” he said.

“I didn’t stop to go out and bloody have a bloody fight with him. I stopped because I thought my car was buggered.”

For good or bad, it’s a moment that will remain in Bathurst folklore as the 2020 Virgin Australia Supercars Championship prepares to head to the Mountain next month for its season decider.

01/09/2020
Stay In The Know
Sign up to the Virgin Australia Supercars Championship Newsletter
We use cookies to ensure that we give you the best experience on our website. If you continue to use this site we will assume that you are happy with it.Ok