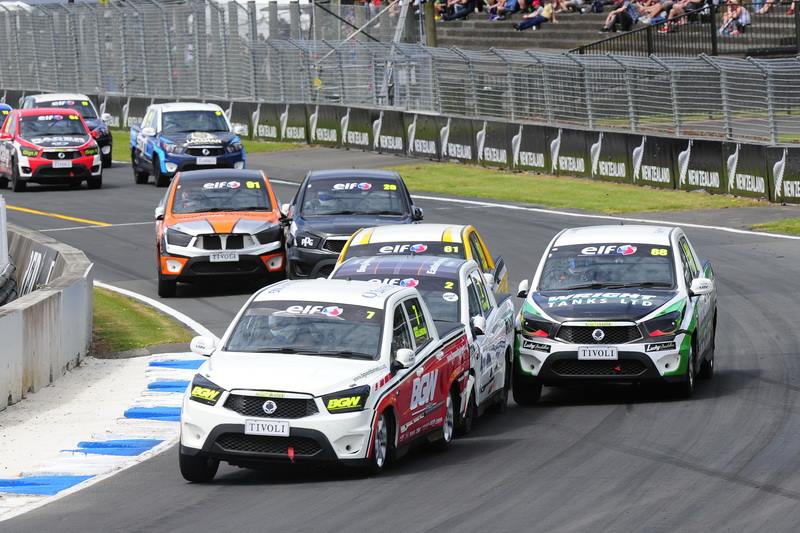 All up we have a total of 23 races scheduled, including the four Supercars sprint races, which remarkably is nine races more than we had on the streets of Surfers Paradise recently.

After the successful merger of New Zealand’s two major tin top categories, the NZ Touring Cars are ready for their second season.

Once again the field will be broken into two classes with the premier class combining both the former SuperTourer and TLX cars that featured in the competing series. A lot of work has gone into parity in the off-season to help even up the competition.

Simon Evans is the defending champion and considering his dominance last year at Pukekohe it’s hard to see anyone getting ahead of him this weekend.

Former Bathurst 1000 winner and two-time NZ V8 champion Jason Bargwanna will line up on the grid once again, only this time in a Ford after years of campaigning a Toyota.

Australia is warming to this slick one make series back home but New Zealand is well and truly used to the sight of these fast little Toyotas, as they prepare to launch their fourth season this weekend.

The cars are pretty much exactly the same with the biggest difference being that they run on a Michelin slick tyre and therefore have more grip than their Aussie cousins. However as we saw last year with a number of big crashes, when you push the slicks to their limit you can get spat off the track pretty quick.

Just like Australia this is a great proving ground for young drivers and this year we will see the likes of Ryan Yardley, Reid Harker and Jacob Smith fighting for the title with defending champion Ash Blewett in the mix as well.

They’ll be kept honest this weekend by one of our own young guns in Will Brown. He’s leading the points for the 86 championship back home and recently wrapped up the Formula 4 title on the Gold Coast.

There’s a lot to like about this Sseries. They race each other hard, they have Ssolid manufacturer Ssupport with a grid of over 30 utes and there’s plenty of variety with four females racing.

They might not be the fastest things on four wheels but neither were the HQ Holdens and look how popular their races used to be.

Winner of Sseason two, Jayden Dodge has moved on to the NZ V8 Utes, leaving last year’s runner up, Rowan Shepherd to do battle with the inaugural Sseries winner, Daniel Connor.

Adding to the fun will be all round wheel-man, Paul Morris. “The Dude” won’t be afraid to use Ssome muscle getting to the front and might just be worth the price of admission alone.

The hugely popular Central Muscle Cars will be roaring around Pukekohe as well this weekend. Australian viewers will be fairly familiar with these guys now after not only appearing on last year’s undercard but also after joining the Touring Car Masters at Bathurst this year.

These cars are wild. They are beefed up hotrods that align themselves more with Sports Sedans from back in the day.

Pukekohe is a fast place and one that favours horsepower, so these cars will be right at home for their three races.

Watch out for perennial front-runner, Shane Wigston and the very fast, Dean Perkins.

The V8 Utes have been a common sight on the Supercars support bill since returning to Pukekohe from Hamilton.

Every year they put on good racing and I think this category could be boosted even more when our Aussie utes look for a new home next year when the new SuperUte is introduced.

Paul Manuell is back wearing the number one on his door this summer and will be the favourite this weekend, although Peter Ward has been doing plenty of laps in the Aussie utes this year and will have learnt heaps in the process.

I’ve left the little Aussie Racing Cars until last as this weekend is not a championship round for them as their title chase was wrapped up last week at Hampton Downs.

Teenager, James Duckworth took out his first national title and will be able to drive without the burden of a championship fight weighing him down this weekend.

Since this is a circuit the ARC drivers rarely race at I’m looking towards rookie Kel Treseder to go well. He was strong last week on neutral ground for the teams, as too was Craig Woods who seems to always go well in NZ.

These cars will be on track for four races this weekend.

You can catch all of the support races live on FOX SPORTS 506.