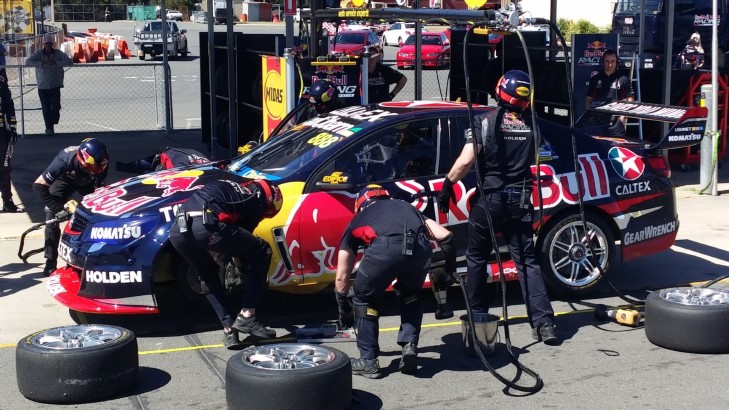 While testing at Queensland Raceway is going to plan for TEKNO Autosports, it is proving a tougher day for Red Bull Racing Australia.

While all four Red Bull drivers - Jamie Whincup, Paul Dumbrell, Craig Lowndes and Steven Richards - have been out on track, Whincup's new chassis is suffering from a vibration issue the team is working through.

The new chassis ran a 60km shakedown at the circuit yesterday, but today is the first full hit-out for the car that will debut at the Wilson Security Sandown 500 next week.

"A few teething issues for car #1, but we will get it organised for Sandown," engineer Mark Dutton said.

"We're just chipping through, running through some new components, things like that," Webb told v8supercars.com.au.

"We did a heap of driver change practice between Shane and myself live on track, we flipped the circuit around for an hour or so at lunch to practice for Sandown, which is good, and we're about to kick off with some testing for the afternoon and me doing some proper miles."

Webb believes the team has made some positive changes that will see them up the pointy end at the first of the long distance races.

"Like everything, you never really know until you get to the race weekend - but we've found a couple of things since Sydney and we'll definitely be pushing on strong come Sandown."

Getting the balance of the car right has been the hardest thing, he said, and the team will be focusing on that rather than throwing new componentry at the car for the endurance races.

"It's more working with what we've got," Webb said.

"What we've got is still good, it's still a competitive package, we probably just need to manage what we've got a bit better. I think we've found a couple of things that will definitely help us."

Stay tuned for more updates from Queensland Raceway throughout the day.

2015 Wilson Security Sandown 500  ›
Stay In The Know
Sign up to the Repco Supercars Championship Newsletter
We use cookies to ensure that we give you the best experience on our website. If you continue to use this site we will assume that you are happy with it.Ok