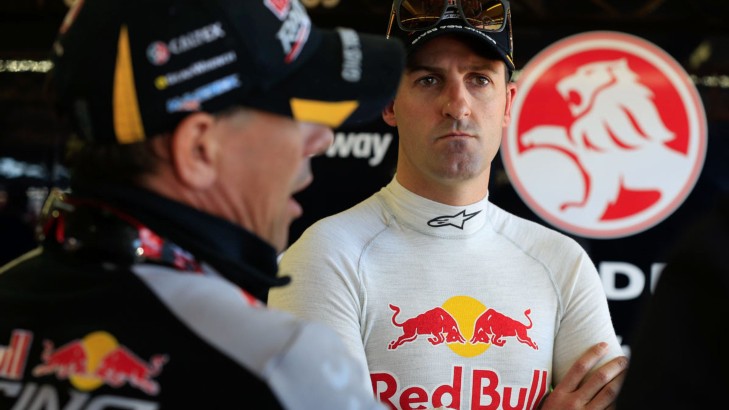 The combination of soft tyres and the longer 'pay day' Sunday races is the weakness Jamie Whincup knows needs fixing as he fights to win a record sixth V8 Supercars Championship in 2014.

Whincup is the Saturday specialist this year, winning eight races over the shorter 100km or 125km distances on both soft and hard tyres. By contrast he has won only once on Sunday - the 250km double points race in Townsville - and then on hard tyres.

"I want to be the quickest in every condition," the Red Bull Racing Holden Commodore driver told v8supercars.com.au. "So we have a challenge on our hands trying to get more pace on the soft tyre."

The good news for Whincup, who resumed the points lead from bitter Ford rival Mark Winterbottom last weekend at the Coates Hire Ipswich 400 (open story in new window), is he faces only two more events with long races on the Dunlop sprint tyre.

The first of them will be the next round of the championship, the August 22-24 Sydney Motorsport Park 400, where a set of soft tyres are allocated for the 200km Sunday race.The second is the final round of the Pirtek Enduro Cup, the October 24-26 Castrol Edge Gold Coast 600, which is conducted entirely on soft tyres.

But Whincup says he finds no consolation that much of the remainder of the 2014 championship will be run on hard tyres.

"We are coming up to the end of them, but in saying that I don't like that. I want to find out why, I want to be quickest in every condition," he insisted.

"The Sunday race on the soft tyre is my weakness. I haven't won one. We have not been anywhere.

"It's definitely our weakness and Eastern Creek on Sunday is the soft tyre, so we have got another challenge coming up."

Whincup entered the last event hoping a recent test day at Queensland Raceway had helped him and new engineer David Cauchi sort the soft tyre issue, but he said Sunday's sixth place finish proved that any progress was marginal.

"We felt closer but Sunday was pretty ordinary," he admitted. "I got done by (DJR Falcon driver) Scott Pye, the Nissan (James Moffat in fifth). I wasn't fast at all, I just stayed out of trouble and wobbled around in sixth. A little bit disappointing but that is life."

Whincup confirmed Red Bull had adopted a different strategy to many rivals - included Race 25 fastest qualifier Moffat and eventual winner James Courtney (Holden Racing Team) - who had purposely held a set of green tyres back from qualifying to use in the Sunday mini-marathon, which rewarded with a double points haul.

The points structure means Whincup's team-mate Craig Lowndes top-scored the event with 276 points by going 2-2-2 over the three races. Whincup was second overall despite his winning two races, 24 points behind Lowndes.

Courtney's win in Race 25, along with 5-10 finishes on Saturday, meant he was only eight points behind Whincup for the event.

"We didn't have any greens for the race, although we always think about it," Whincup confirmed. "Our objective was always to score as many points as we can over the weekend, and we were one-two.

"So if you assess our strategy you have got to give it a tick, because you give some and you get some. We were pretty happy with our tyre strategy this weekend."

Whincup also said he was happy to be back in the lead of the championship, a position he hasn't held since the opening day of the 2014 campaign at the Clipsal 500.

"To lead the championship you have got to have a quick car and be very consistent as well. We have done a good job of that and we need to find a bit more pace in some areas," he said. "But happy to be leading the championship. I'd rather be there than in second or behind, but there is still a long, long way to go.

"We will keep our head down and try to get better, the competition is unbelievably strong at the moment. It is a really good thing, it is awesome for the category and it is only going to get stronger. To be at the front of the category and that bunch is a bloody hard thing to do."