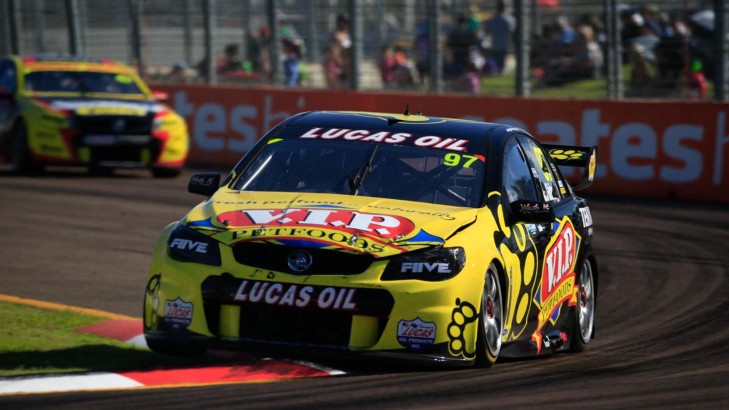 Beginning August 1, the next event is staged at the Queensland-based teams' test track -which explains why all four outfits will be on track this week, using one of three allocated independent test days of the year.

"You've got to make the most advantage of the home track," Webb told v8supercars.com.au.

"The home track advantage is not as strong as it used to be, where you'd rock up and know you'd have a good weekend.

"It's not so simple anymore - so we need to make sure we are here, we can test, and we maximise the advantage of that, and maximise the amount of points we can haul in for the weekend, knowing it's such a tight Championship at the moment."

Van Gisbergen sits fourth in the standings, in a tight battle group that sees third to sixth separated by less than 10 points. With past Queensland Raceway winners James Courtney and Craig Lowndes hot on his tail, 'SVG' will need to ensure a strong performance at the all Dunlop soft tyre event.

"I think Shane wasn't overly happy with the car early on today, and had a couple of ventures off track, but nothing too major," Webb said.

Sharing the circuit today is Triple Eight/Red Bull Racing Australia, with Jamie Whincup and Steve Richards behind the wheel of the #1 and #888 Holden Commodores, respectively.

Red Bull team principal Mark Dutton explained the reasoning behind the impromptu test, with Dunlop soft tyre performance a focus, with the next two events using the compound.

Webb felt running on softs was not a concern for TEKNO, but of course, it is something worth assessing before thoseupcoming race meetings.

"I think Triple Eight definitely feel like they're behind the eight ball on the soft tyre," he said."We're not stressed about it, so to speak - but in saying that, with a full soft tyre weekend coming up it's something to be mindful of and now is the time to get it right before we go into the race weekend.

"I'll jump in after lunch, do a few bits of pieces, and then Shane will jump in the late half of the day, for what we call 'happy hour' to the end, put some decent tyres on and see what we can do with it... we have got enough soft tyres in the bank to get something from the day."

Co-driving with van Gisbergen for the PIRTEK Enduro Cup, Webb is looking forward to nabbing a few laps in the VIP Petfoods Commodore this afternoon -though he mentioned rain could be on the way up at Ipswich.

He also confirmed the team will use its final independent test day of the year prior to the first of the long-distance races, the Wilson Security Sandown 500, with a stronger focus on gaining some more miles in the Holden.

Van Gisbergen is yet to score a race victory at Queensland Raceway, with Craig Lowndes (11) and Garth Tander (five) having earned the most wins at the 3.12km track affectionately known as 'the Paperclip'.

The day has gone smoothly for Triple Eight, with the team making progress.

"If you come away from here going a tenth of a second faster, you'e had a good day," Brad Jones said in a team preview.

Fans will go into the draw for a hot lap with Van Gisbergen when purchasing a three-day pass to the Coates Hire Ipswich 400.

Shane van Gisbergen  ›
15' Team Darrell Lea STIX ›
2014 Coates Hire Ipswich 400  ›
Stay In The Know
Sign up to the Virgin Australia Supercars Championship Newsletter
We use cookies to ensure that we give you the best experience on our website. If you continue to use this site we will assume that you are happy with it.Ok