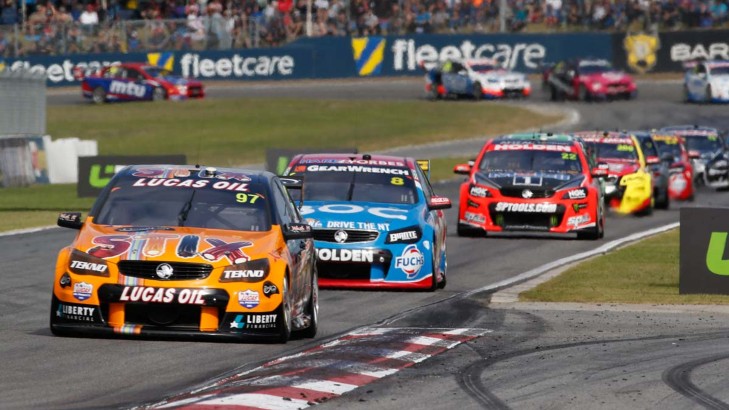 Shane van Gisbergen has confirmed he and his TEKNO team have an ace up their sleeves for today's 200km sprint at Barbagallo Raceway.

After qualifying poorly for yesterday's second race, the team decided to hold one set of freshtyres to throw into the mix today in the hope of a speed and strategy advantage.

While the stars will need to align for the gamble to pay off, TEKNO is notorious for taking big risks as it shoots for the Championship title it fell short of last year, when van Gisbergen finished second to Jamie Whincup.

Despite his qualifying result the second time round, Darrell Lea STIX Commodore driver van Gisbergen insisted he had the pace, and isn't falling foul to what has been a 'bogey' track in the past.

"We were playing tomorrow's game," van Gisbergen told v8supercars.com.au when asked about his 24th place finish.

"We were pretty good in the morning and the car's good enough - it just looks bad because we were on tyres that were a race older than everyone else's. But we do have a fast car and we are on the pace."

Van Gisbergen said in the lead up that tyres would be the secret weapon this weekend - but just how big a gain will it be to have an extra set of fresh hard tyres?

"More than 10 points worth, which is what we lost - from 18th to 24th is nine points, [today] is double points and a bigger gap, hopefully where we're going to end up, we should get the payback then."

Prodrive's Pepsi Max Falcons dominated at Barbagallo Raceway yesterday, claiming both wins and both ARMOR ALL Pole Positions, and won on Sunday last year at the circuit.

The team's head of engineering Nathaniel Osborne believes having theset of hard tyres would be a significant advantage for TEKNO - as long as everything goes to plan.

"It'll pay off for them, but you want to hope everything else falls their way because you have to race the day you're in," Osborne told v8supercars.com.au.

"If something goes wrong - you get a pit lane penalty, it rains, drama in the pits - you've done yourself out of points for two days."

He felt that saving tyres after a poor starting position probably was a good choice, given the lack of passing yesterday.

"It's hard to put a number on that, it's a significant advantage - but you have to have all the other pieces in place to make it work.

"So if they can put it on the front three or four rows and bank the tyres and have nothing else go wrong, it'll pay off - but there's a lot of factors there."

Osborne said there would be different strategies playing out across today's 83 lap race, with some potentially taking more than the two pit stops required to meet the minimum fuel drop.

"It's hard to gauge from those two races what everyone's strengths and weaknesses are ... people are going to strategise to their strengths," he said.

After yesterday's races, six-time and defendingchampion Jamie Whincup said running their first set of tyres again would be "nuts".

"We've got a set for [Sunday] and a soft set as well, so I'd be very game to suggest anyone ran their first set of tyres again [in race two]," he said.

However, van Gisbergen - who will join the Triple Eight fold alongside Whincup next year - seemed confident in his team's choice and is highly motivated to take the title for TEKNO in his final season with the group.

"We are here to win it, so nothing changes in that respect, and I have full belief we can win it," van Gisbergen said.

Stay tuned to see how the team's alternate strategy plays out across the intense 83-lap race today at the UBET Perth SuperSprint.

Click here for telecast information for FOX SPORTS and TEN.The action kicks off with 15-minute practice at 10.55am local time, before qualifying and the 200km V8 Supercars race.

Two from two for Frosty in Perth

Winterbottom back on top in race one

PRA earns back to back pole positions