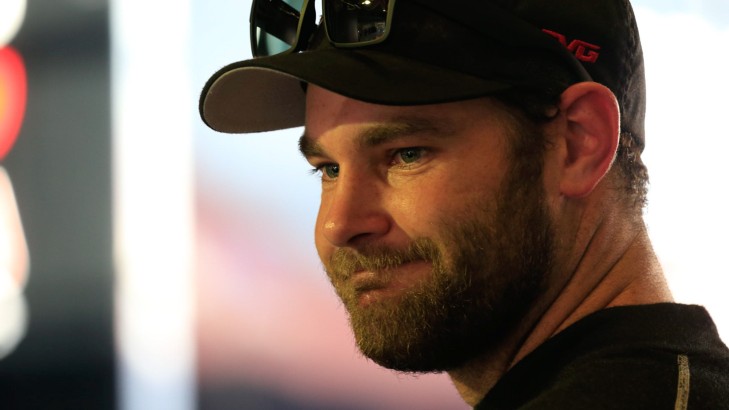 The Tekno Autosports team is confident it has developed a safeguard that will prevent a repeat of the heartbreaking pitlane drama that cost Shane van Gisbergen and Jonathon Webb victory in the 2014 Supercheap Auto Bathurst 1000.

The team's Holden Commodore VF stalled at a final splash and dash pit stop and then the starter motor burned out when van Gisbergen tried to fire the car back into life.

By the time the starter motor was replaced and van Gisbergen was back in the race all chances of a win were lost and he and Webb finished 16th three laps down.

While van Gisbergen has joked about the issue recently on Twitter, team owner Webb told v8supercars.com.au the root cause of the stall and subsequent starter motor failure were complex and had required substantial investigation and testing by the team to try and find a fix.

"It's not like the starter motor just didn't work," he explained. "There was a lot more to it and it (the origins of the problem) could have started as early as the Thursday or Friday leading into the event once the car hit the track.

"There are multiple factors that could have caused that and we have worked through all of them, modified all of them, tested the different variants during the year at some stage.

"So we are not jumping (to a conclusion) but we are quietly confident that won't happen again. We have certainly done our best to make sure it doesn't."

Stalling and the failure of the onboard starter motor are traditional issues for V8 Supercars in long distance races.

The starter motor performs a particularly difficult task because high compression race engines are not easy to start. It also tucked away at the bottom and rear of the engine and cops a lot of heat from the primary exhausts.

It is also a quite complex piece of equipment, comprising both a high-torque electric motor and a mechanism to fire the starter pinion into a ring gear on the flywheel that cranks the engine.

Starter motors fail for a number of reasons including the engagement process or wire shorting out.

At Bathurst last year the the Tekno Commodore's starter jammed and then melted down as the battery continued to pump current into it.

"We worked through all scenarios and all options and we are fairly confident we know why and how it happened," said Webb.

"And if we are right - and we are quietly confident we are - and I won't go and promise the world we have fixed everything, it won't be an issue for us going into this year.

Webb said with the 2015 Supercheap Auto Bathurst 1000 looming, there was no escaping Tekno's 2014 drama.

"It's already obviously appeared a couple of hundred times in the last few weeks as much as I try to forget about it," he said. "I have been able to forget about it for 10 months, but it's that time, it's Bathurst time.

"We have obviously got the heartbreak of last year, but hopefully that will make us stronger.

"We knew we had had a good car (in 2014) and the team did a great job all day and it was just one of those bad luck stories that you can't do too much about.

"We are looking forward to going back; Shane and I both enjoy the place, we had a quick car last year and if everything goes half as well as it did last year apart from that one issue then we have got a really easy day ahead of us."

After several events in the doldrums the Darrell Lea Stix Commodore bounced back in the Wilson Security Sandown 500 to finish a strong third, with Webb amongst the fastest co-drivers.

Webb said a "triple check" of the car and a successful test day before Sandown had both been vital to rediscovering front-running pace.

"I think me being back in the car wasn't a bad thing for Shane because I knew his confidence was struggling with the car, as it does in a single car team; 'Is it me, is it the car, is it the team'?

"So me and Shane bounced off each other on the test day and on the Friday at Sandown and we were really happy with the direction we got for the weekend. Hopefully, we do the same at Bathurst."

2015 Supercheap Auto Bathurst 1000  ›
Stay In The Know
Sign up to the Repco Supercars Championship Newsletter
We use cookies to ensure that we give you the best experience on our website. If you continue to use this site we will assume that you are happy with it.Ok