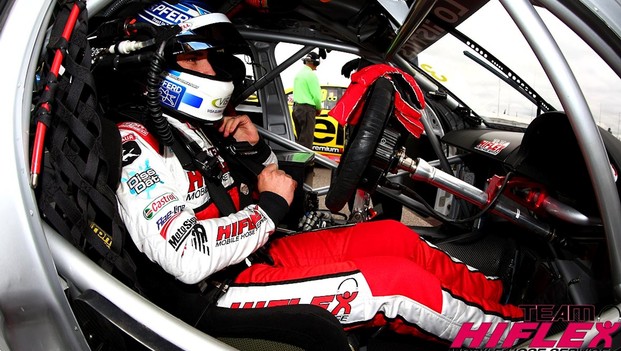 Coming off the back of what it considered an outstanding Winton weekend last month, Team HIFLEX hopes to consolidate its strong form ahead of the three big V8 Supercars endurance races, kicking off this weekend with the Wilson Security Sandown 500.

Team driver Tony D’Alberto scored a brilliant front-row start at Winton, and backed it up with a fourth place result.

After conducting a productive day of testing at Winton last week, D’Alberto and endurance driver Jonny Reid are looking forward to the 500 – the first of three two-driver endurance races.

“After a great Winton round and a strong test, the Sandown race couldn’t come around fast enough. I’m very excited,” D’Alberto said.

“We’ve been chipping away at getting towards the very front of the V8 field, and Winton proved that our team has the capability of mixing it with the best.

“The challenge for us now is to maintain that form and remain consistent for the rest of the season, starting at Sandown this weekend.

“I feel we’re in a good position for this weekend. Jonny has been coming along really well. I can’t wait to get into the car.”

Reid, no stranger to the V8 Supercars Championship, has enjoyed some considerable time in the seat of the #3 Holden Commodore VF and is looking forward to the challenge of mixing it with the best V8 Supercars drivers.

“The more laps I do in the car, the more I’m feeling comfortable,” Reid said.

“We had a good test day last week. It was dry conditions, so we were able to push the car and by the end I was getting confident, and that confidence will only grow with a heap of practice time at Sandown, plus the co-driver race (on Saturday) and the race itself.

“The team is in great form at the moment too. I was there at Winton with them and they were on the ball the whole weekend.

“I’m really looking forward to the whole show. We’re expecting to be right in amongst it and giving it a good go.”

The unique Sandown 500 format will see each driver compete in their own ‘qualifying’ races on Saturday that will determine the grid for Sunday’s 500km race.

Practice kicks off tomorrow and tickets are still available for the Wilson Security Sandown 500.

Co-Drivers All Ready for Weekend's Challenge

Tony D'Alberto  ›
15' Team CoolDrive ›
2013 Wilson Security Sandown 500  ›
Stay In The Know
Sign up to the Virgin Australia Supercars Championship Newsletter
We use cookies to ensure that we give you the best experience on our website. If you continue to use this site we will assume that you are happy with it.Ok