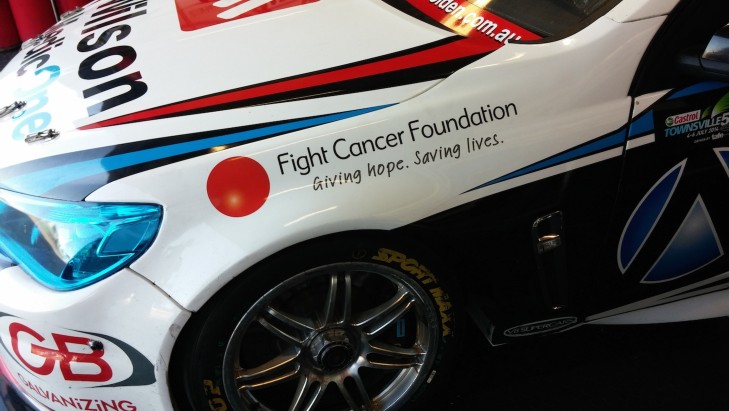 Team ADVAM/GB will once again be throwing its support behind the Fight Cancer Foundation at the upcoming Coates Hire Ipswich 400.

The prominent Foundation logo first appeared on the car at the SKYCITYTriple Crown in Darwin earlier last month and Gian Gucciardo, Managing Director of GB Galvanising says it's an organisation that deserves support.

"They do great work for people with cancer, helping to accommodate those who suffer from this terrible disease and their families who often have to live for many months outside of home to be with their loved ones in hospital," he said.

"The Foundation is also helping to find a cure by funding cancer research projects and run the Red Ball every year, which Hugh Jackman and Deborah Lee Furness are patrons of, that raises money for the cause."

Gucciardo has a very personal connection with the Fight Cancer Foundation:

"We came across the Foundation 11 years ago because my brother passed away from Leukaemia. He was only 33 when he got it. He insisted we go to the red ball and that's how we got associated with it."

Team ADVAM/GB driver Dale Wood is pleased to represent the Foundation on the car.

"I am very proud to be supporting this charity," he said.

"The fact I'm in a position to be able to fly the flag for Fight Cancer Foundation is a privilege. I hope by getting them in front of the V8 Supercar audience we raise more awareness and ultimately funds so that this group can continue their great work."

"We're thrilled that they are such strong supporters and very excited to see the car charging around the racetracks - we wish them every success," he said.

Gian Gucciardo has a clear message for V8 Supercars fans.

"We'd love for people to donate - not just money but their time. Until you're hit with tragedy I don't think you really realise the needs of people. It's only when you're hit with it and going through all that heartache that you realise how important that is. Ten dollars doesn't sound like much but it all adds up," Gucciardo said.

For more information on the Fight Cancer Foundation, click here.

For tickets to the Coates Hire Ipswich 400, running from August 1-3, click here.

Dale Wood  ›
15' GB Galvanizing Racing ›
2014 Coates Hire Ipswich 400  ›
Stay In The Know
Sign up to the Virgin Australia Supercars Championship Newsletter
We use cookies to ensure that we give you the best experience on our website. If you continue to use this site we will assume that you are happy with it.Ok