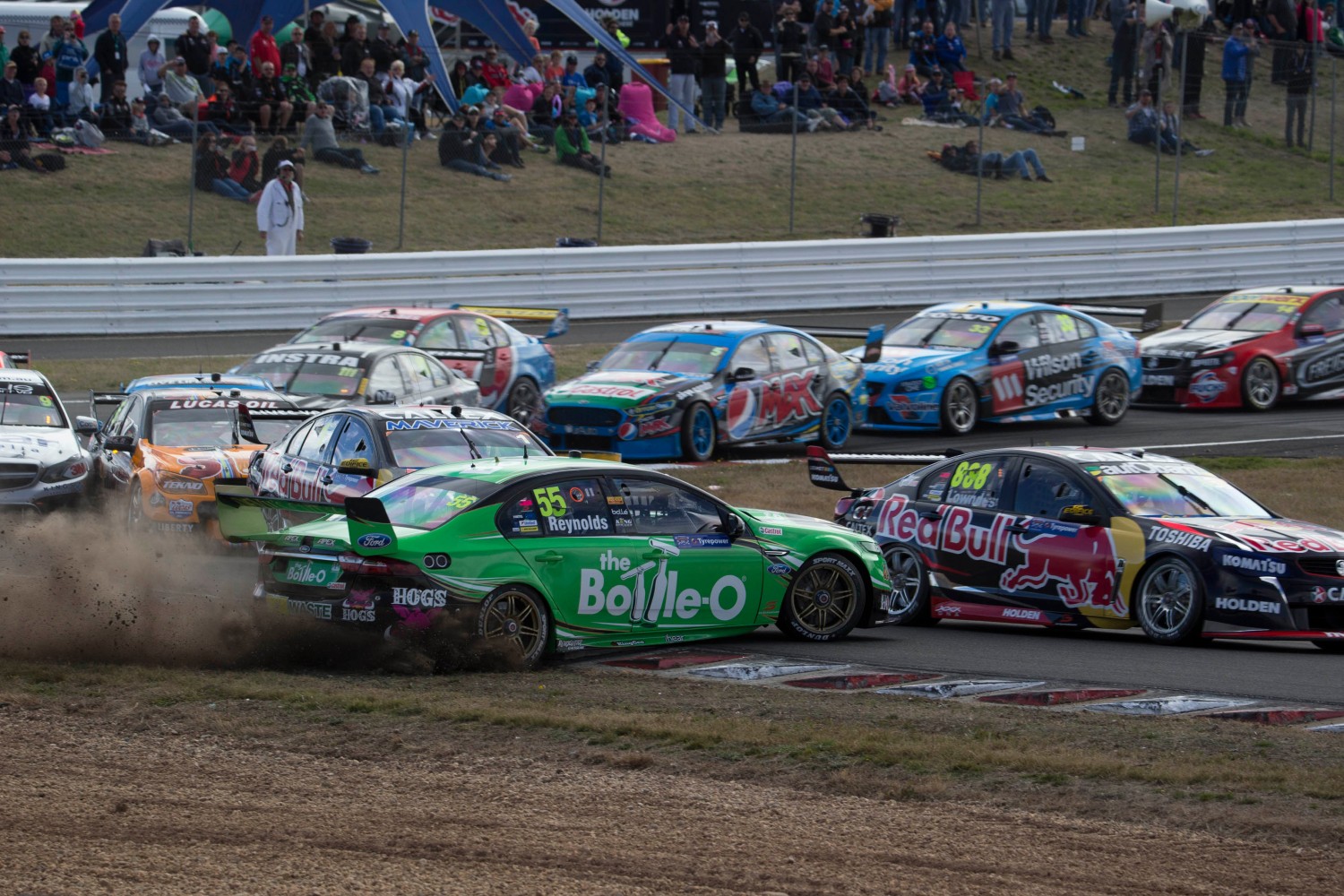 Few know the trails and walkways of Australian circuits better than Mark Horsburgh, who has captured Supercars' most iconic moments for over 20 years.

Horsburgh, who was honoured by Motorsport Australia for his outstanding work during the COVID-19-affected 2020 season, was on the spot for a defining moment at this season’s next venue.

Symmons Plains, which will host this weekend’s Beaurepaires Tasmania SuperSprint, played host to a championship-defining moment in 2015.

Horsburgh was on the spot for the controversial start to the 2015 event finale, which began with Craig Lowndes and David Reynolds coming to blows just seconds after the start.

All eyes were on Lowndes, who was eyeing his 100th career win. Reynolds vaulted into what appeared to be an early lead, only to be turned around by the #888 Commodore.

The two drivers’ hopes were ruined almost before it began, with Lowndes and Reynolds forced to fight their way through in the 84-lapper.

Lowndes, who copped a penalty, muscled through to finish sixth, with Reynolds recovering to 11th.

At the time, despite the season being in its relative infancy, Reynolds suffered a big blow to his championship chances, dropping 157 points behind Lowndes, surrendering 24 points to him in one race.

By season’s end, Lowndes beat Reynolds to second in the championship by just 98 points.

In the moment, Horsburgh had planned to capture the start, but he acted on his experience and understanding of the racing product to execute a masterful piece of photographic storytelling. 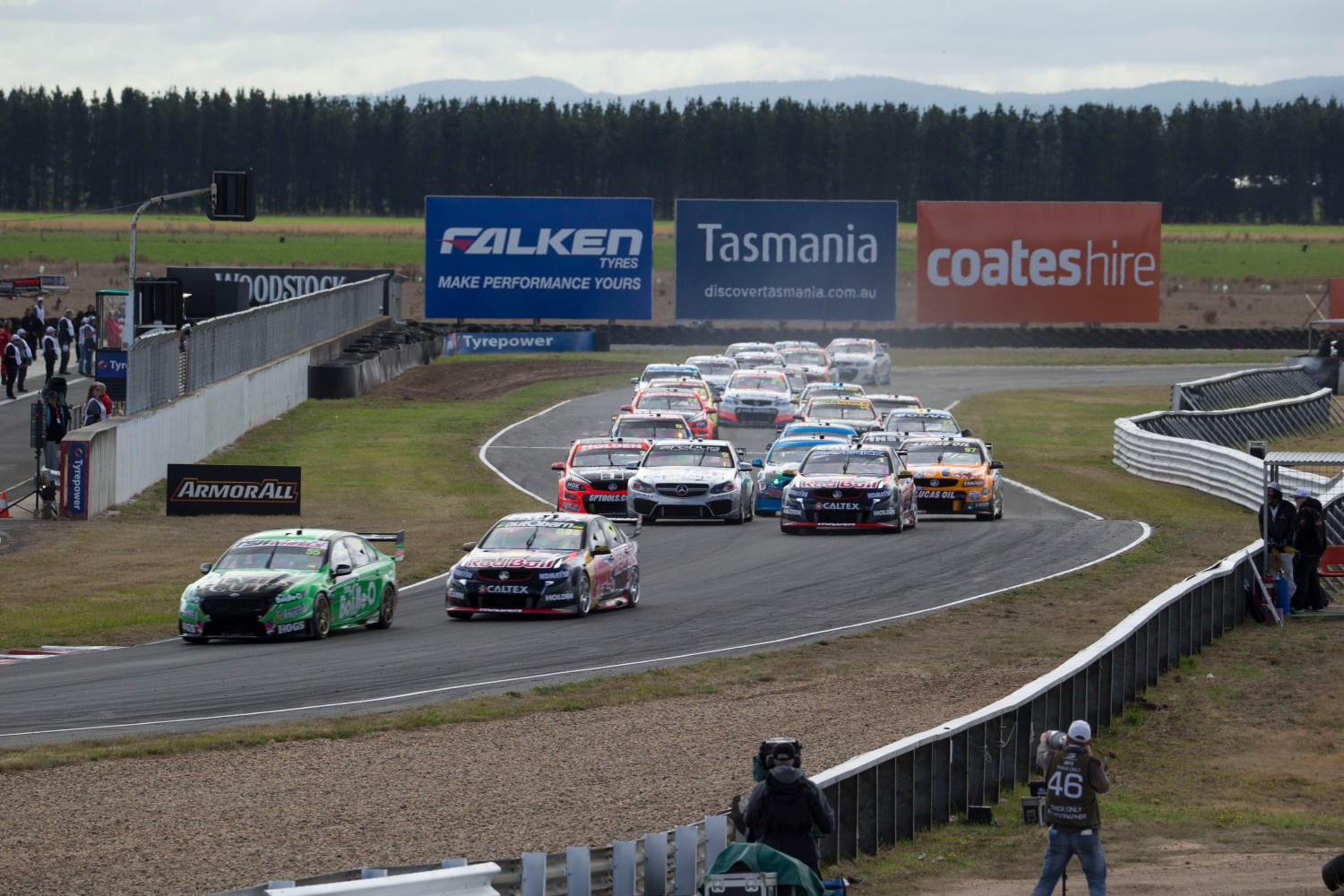 “Looking from the Turn 1-2 chicane is one of my favourite start shots,” Horsburgh told Supercars.com.

“The cars come into Turn 1 and they all bunch up, and generally there’s a bit of a bottleneck.

“There, I’m raised up on a dirt bank, which is behind a barrier. It was nearly in line with where Scotty [Pye] had his big accident a few years earlier.

“I was poised, waiting for something to happen; however, most accidents are right place, right time.

“Accidents can happen anywhere, any time; you couldn’t have predicted when there was the massive pile-up heading to Turn 4 into the spray.” 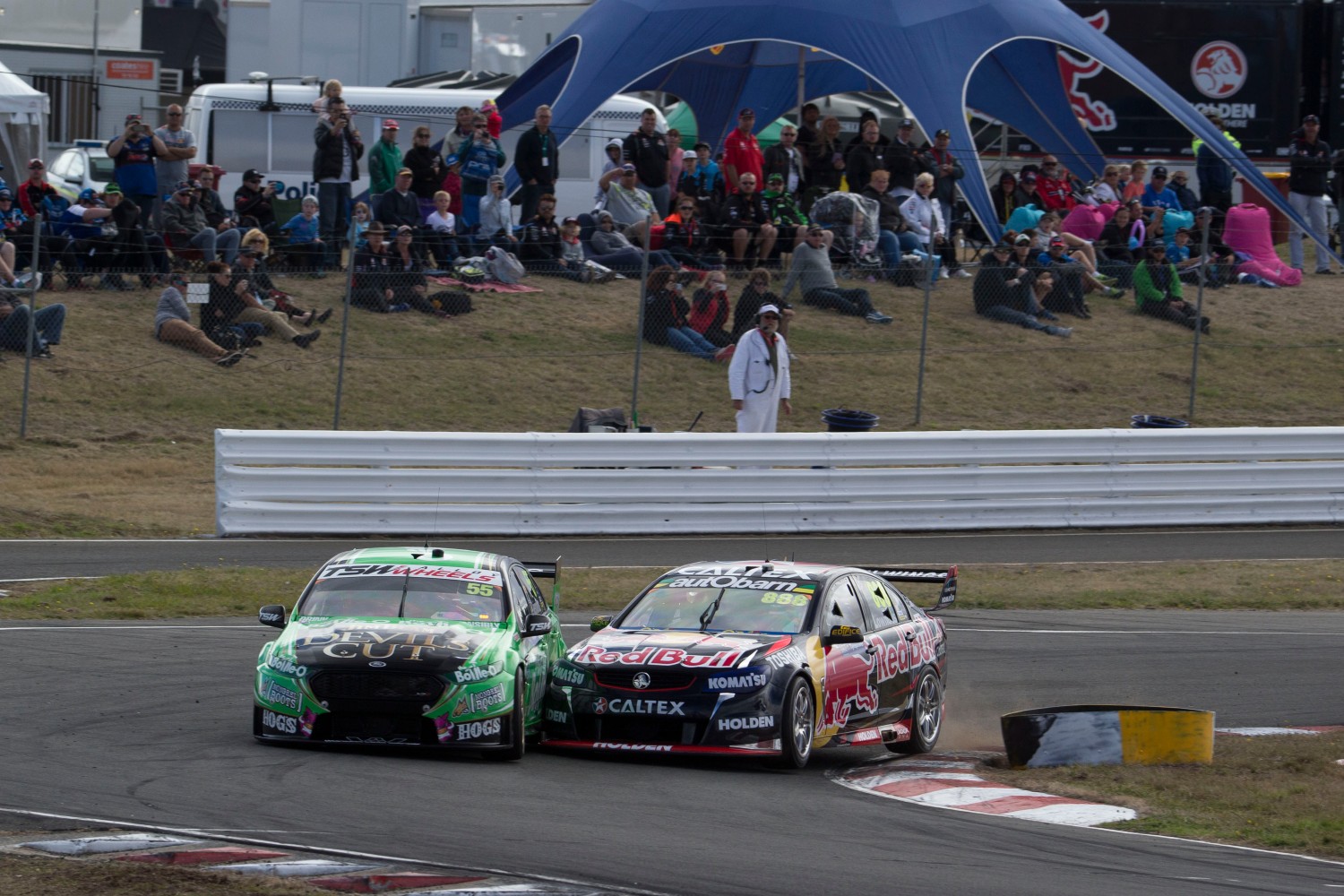 Horsburgh captured the start of the fateful 2017 race, before moving down the infield to shoot the immediate aftermath.

By the time he arrived on the scene, the clean-up had begun, but not before he was able to commence his storytelling of the incident.

Regarding the Lowndes-Reynolds incident, Horsburgh was right on the spot, and captured the Bottle-O Falcon pirouetting in front of the field.

It came down to split-second decision-making, with Horsburgh contending with over 25 cars fighting over the same piece of tarmac, all of whom passing through the corner in a matter of seconds.

“Anyone would have been lucky to snap that, even though in our sport, there’s a high chance of there being some kind of incident in the first few corners of a race,” he said. 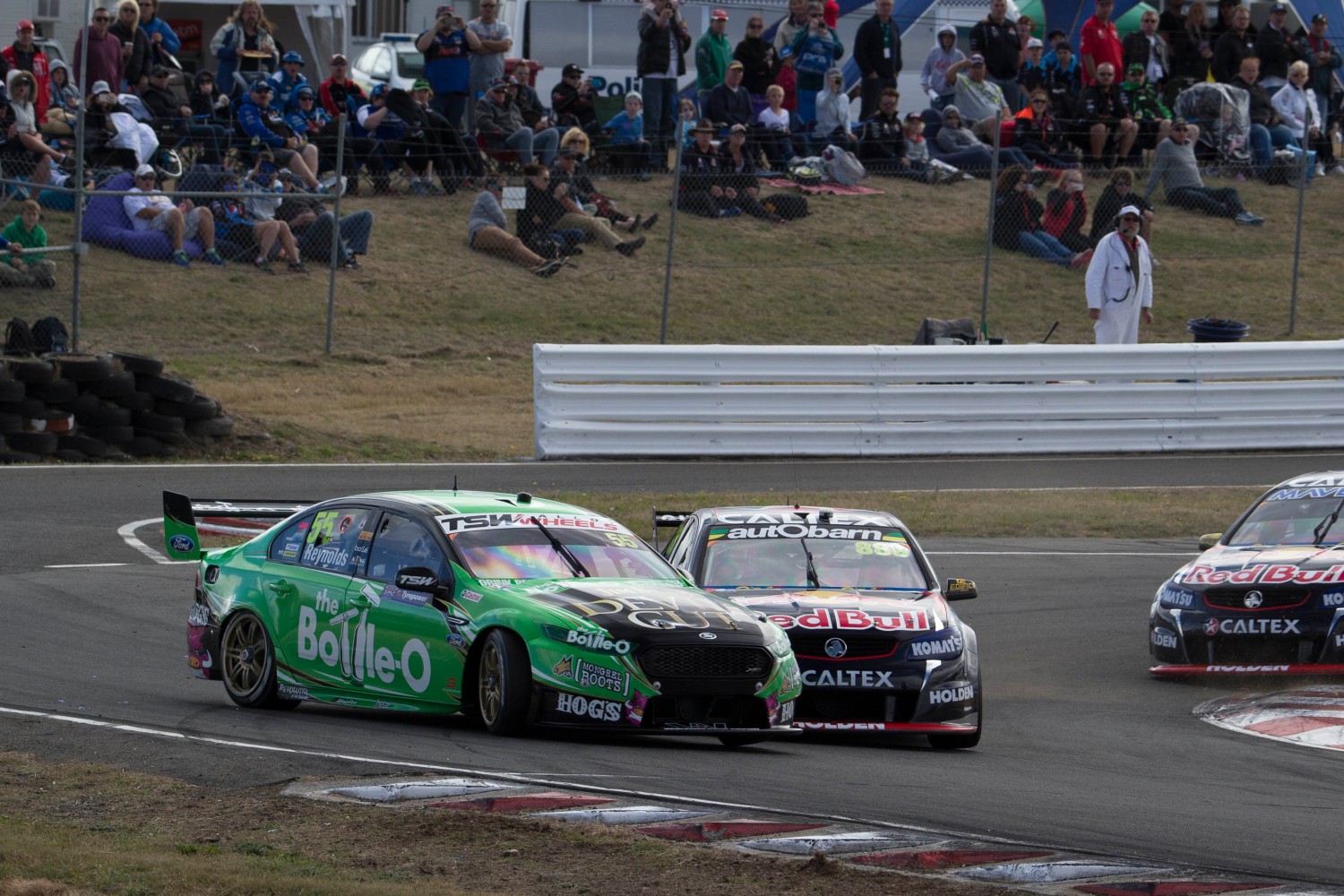 “But you’ll take a chance to get a good start shot, and a bonus for the photographer would be if there was an incident.

“You’re shooting, and you’re scanning the viewfinder for anything.

“You’re concentrating on the front of the field, but at the same time, your eyes are wandering through the frame, looking for anyone going sideways or locking up.

“Not all accidents happen at the front; if anything, they’re mid-pack or lower.

“Sometimes, something can happen right in front of you and you can totally miss it. It comes down to luck, but also good planning.” 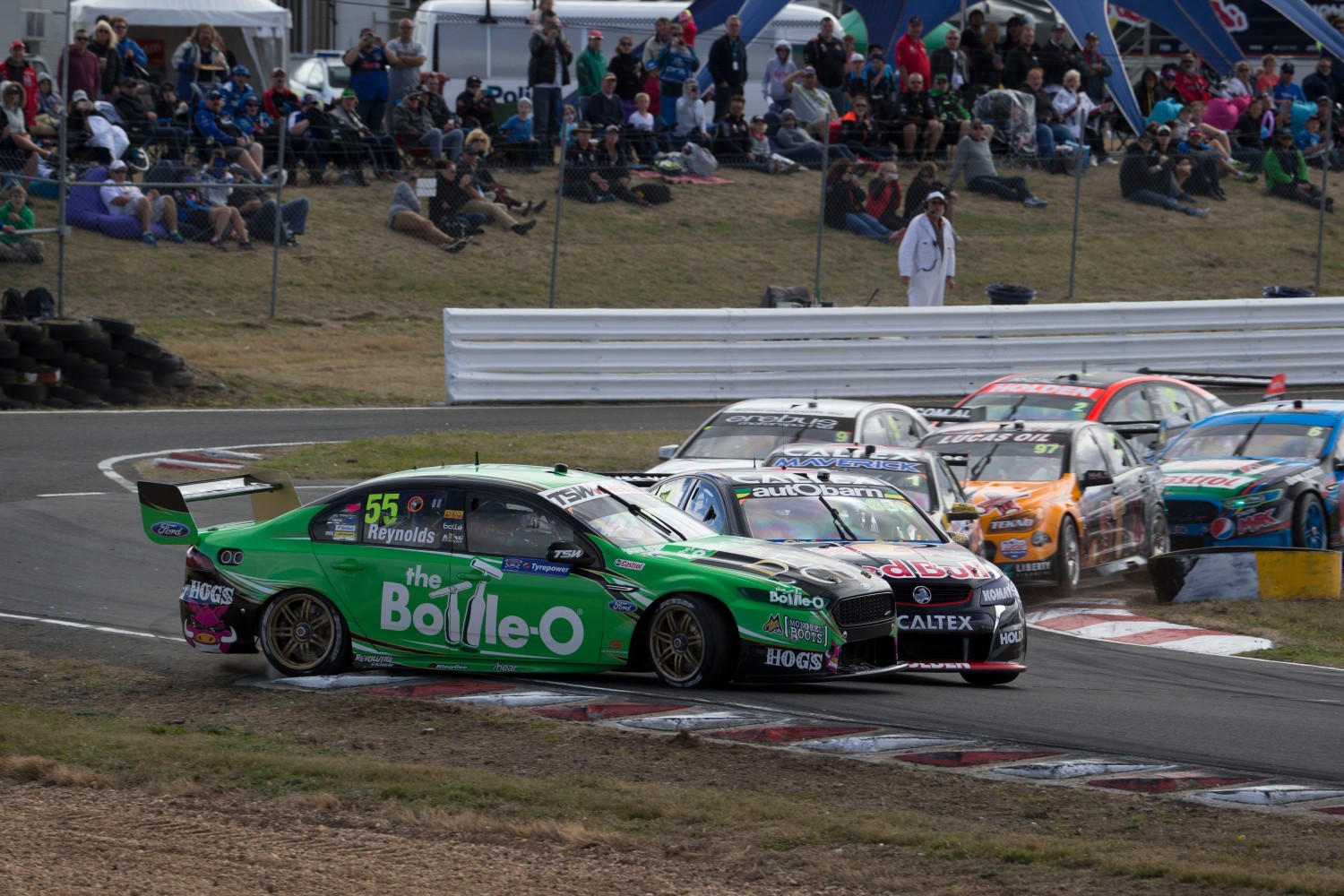 The field arrives on the scene of the incident

Horsburgh’s mission is more difficult than most sports photographers; where his contemporaries in other sports have a compact stadium to work with, Horsburgh has multiple kilometre-long race tracks made up of several corners, attacked by several cars.

From there, he has to have a plan of attack; which corners to shoot from, and for how long.

Sometimes, that may mean he’ll be at one end of a circuit, with an incident happening at the other.

“You have a bit of a plan before the race starts; you have a think about where you want to go, and how much time it’ll take to get there,” he explained.

“In the case of the Lowndes-Reynolds incident, I’d hang there for a lap to two; there’s more than likely going to be a Safety Car. 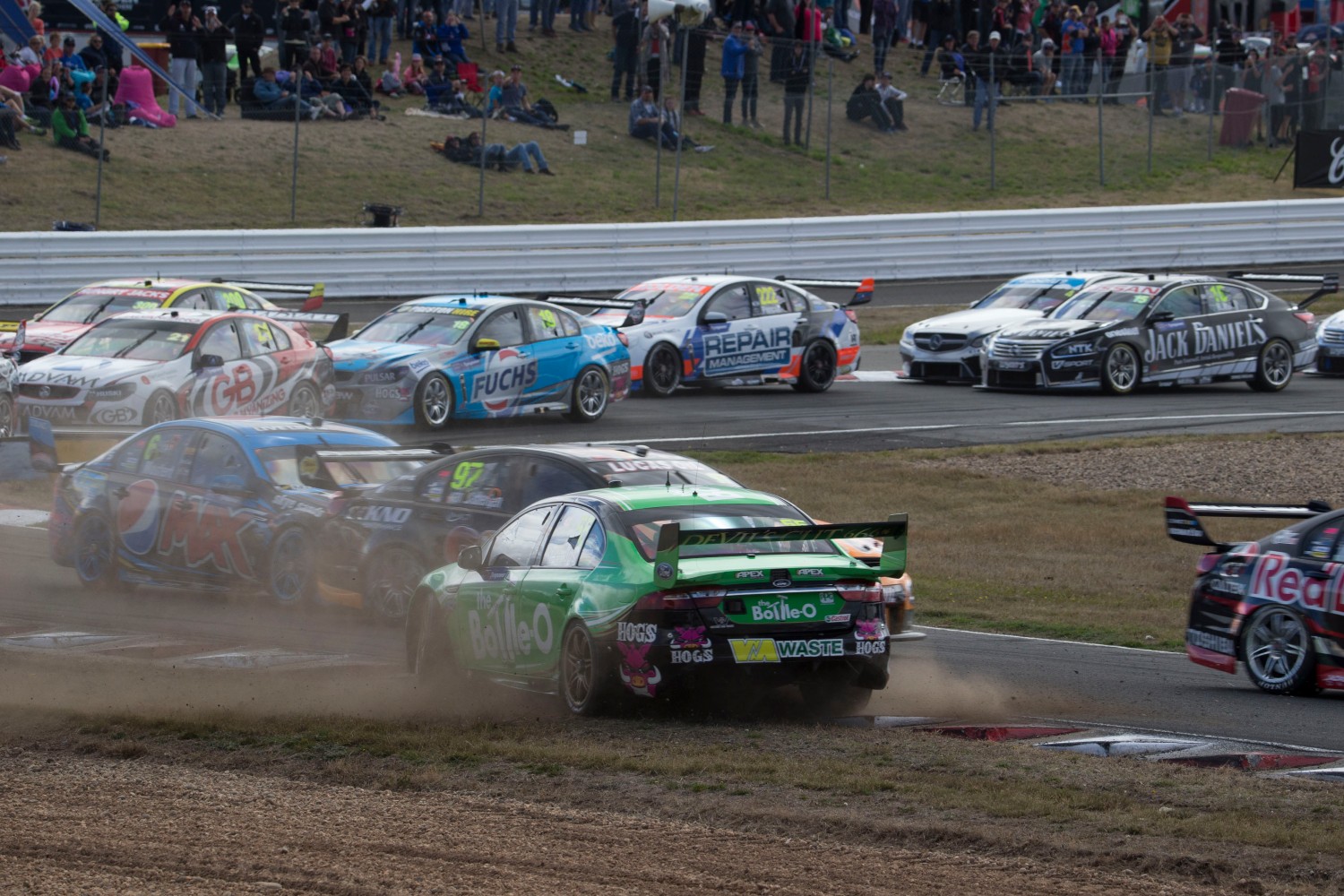 Reynolds watches on as his rivals speed past

“If it’s a big accident, there’ll be a sequence of events from the impact, to the driver getting out of the car, and the recovery.

“It’s storytelling; you want to make a story out of it all, rather than just getting shots of two cars hitting each other.

“A driver could get out of the car and put his head in his hands, or wave his hands in anger; I’m trying to capture his reaction, which helps tell the story as well.

“After that, I stick to my initial plan, as if I’d planned to go to Turn 5, then across to Turn 7 before capturing the finish.”

While every photographer wants to get ’that’ shot, Horsburgh acknowledges that it’s in the best interests of the sport for someone to capture a moment.

That will remain the case from this weekend’s event and beyond, with Horsburgh and his contemporaries looking to cover the sport in ways they know best.

“If you stick to your plan and you miss something at the other end of the circuit, then you shouldn’t kick yourself,” he said.

“But if you change your plan, and something happens where you had intended to go to, and you miss it, then you just beat yourself up.

“Nobody gets upset for not being there to capture an incident if you hadn’t planned on being there.

“My theory is; if someone out there captures the moment, then it’s good, because it tells the story for the sport.

“It’s always a shame if there’s an incident and nobody gets anything of it, so there’s no record of what happened.

“It’s all about capturing the moment, and the emotions of our sport.”

Horsburgh will be behind the lens at this weekend’s Beaurepaires Tasmania SuperSprint. Tickets are on sale now.