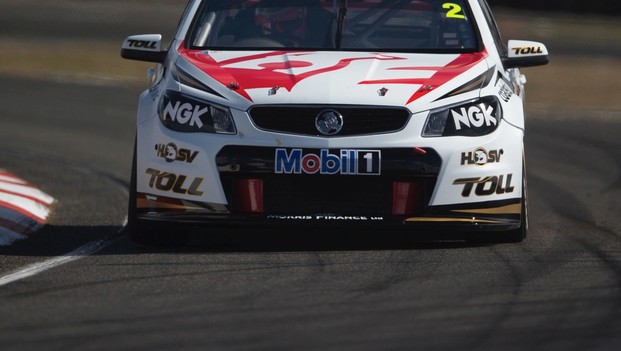 Holden Racing Team was on the pace in thismorning’s practice session, with Garth Tander in the top five for the majorityof the 30 minutes and James Courtney popping up in the top 10.

With about two minutes to go, Tander achieved a51.0729 sec, shooting to the top of the times. His run was quicker than yesterday’sfront-runner Craig Lowndes, who topped Friday Practice with a 51.3794 sec.

2007 champion Tander said a Saturday practicesession meant a different plan for the weekend, with Friday functioning morelike a test day.

“We held a set of tyresback from yesterday to use this morning, so we took a bit of pain yesterdayhoping we could assess changes overnight and then implement them today on agood set of tyres,” Tander said.

“So we did that and it worked well, becausewe were in the top five most of the session and then we bolted a set of tyreson at the end there, to see where we were at. This batch of race tyres here aredifferent to the practice tyres we had, so the car responded nicely.”

Tander has won at Symmons Plains seventimes, and while he was encouraged by the session, he felt the car needed to besharpened up before qualifying.

Tander sees it as two races, with onenot-for-points, rather than as one big race with a mid-session break.

“I think not racing for points in the firsthalf of the race is a bit of a concern – every time we race, we should race forpoints. It makes it more meaningful and guys try harder in the first half, so Ithink potentially all you’re doing is playing chess in the first race, gettingyourself ready to go, ‘Checkmate!’ in the second half.”

Garth Tander  ›
15' Holden Racing Team ›
2013 Tasmania Microsoft Office 365  ›
Stay In The Know
Sign up to the Virgin Australia Supercars Championship Newsletter
We use cookies to ensure that we give you the best experience on our website. If you continue to use this site we will assume that you are happy with it.Ok