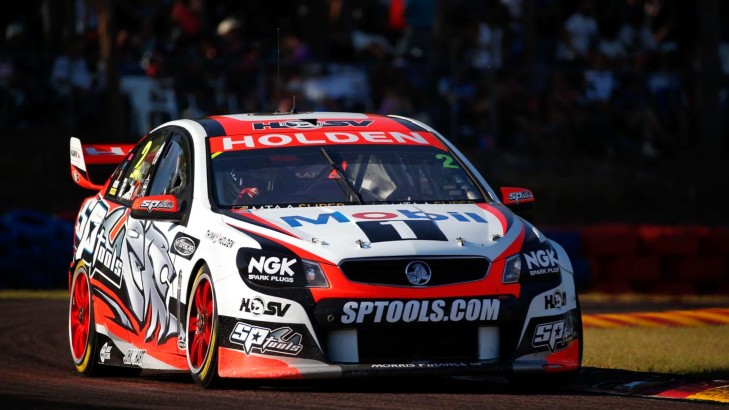 Garth Tander's ability to continue his impressive top 10 form beyond the SKYCITY Triple Crown in Darwin is "massively important" for the rebuild of the Holden Racing Team not least because it will ensure teammate James Courtney keeps performing, team boss Adrian Burgess has declared.

Showing his best form of the season, Tander qualified 5-6-11 in his Holden Commodore VF for the three races that comprised the Hidden Valley event, finished fifth and fourth in Saturday's two 100km sprints and sixth in Sunday's 200km mini-marathon despite getting a raw deal from the safety car and having to stack behind Courtney.

However, while Courtney beat him home in that race with fifth, Tander was ahead in both Saturday races and clearly the leading performer among all four Walkinshaw Racing entries in Darwin.

Which pleased Burgess to no end, as he believes a competitive Tander ups the pressure on Courtney - who has been the outstanding Walkinshaw Racing driver this year - to continually lift his game also.

"It's great for everyone," Burgess told v8supercars.com.au. "It's massively important for the team to have him pushing this one (Courtney) and having them near each other all the time.

"It's massively important, a great confidence boost for him, just massive for his confidence. We know he can do it, we have just had to give him the car in which he can.

"This is what we need, the GT of old. Looking at him like this he is like Courtney, when he gets this confident and he gets the arms out. Nobody came past him when he was under pressure this weekend."

Tander, who recently re-signed with HRT, played down any desire to act as a motivational tool for his teammate.

"That's my preference and my first focus and if I do that and he (Courtney) does that on his side of the garage then we are dragging each other up and along.

"I am sure Adrian will be happy when we starting battling one and two and I am sure we will get there eventually."

Burgess attributed Tander's improved pace to the recent Winton test which resulted in changes to the #2 Commodore.

"We definitely found something at the test with him that was affecting the way he drives and what he wants from the car and we changed that," explained Burgess. "Now we hope we have got him in place where we can start working with him and his feedback is similar to the guys in the other cars.

"It is a big step forward for us and the team to get the most out of it because we know he is capable of winning. He hates it being down the back and we hate it."

In typical fashion, the 2007 V8 Supercars Champion and three-time Bathurst 1000 winner, who lies 11th on the Championship points - up four spots after the SKYCITY Triple Crown - wasn't getting carried away with his results.

"We just came and did our job. It is what we are paid to do, it is what everyone in the team is paid to do, come and put your best foot forward, which is all you can do every weekend. For us we have had - especially on Sundays - a lot of stupid stuff, silly weird things go wrong for us all year. That's why we are nowhere in the Championship, because Sunday is points day.

"It is a footy clich but it is one week at a time. Championship-wise that is not a factor, as far as Championship position. So for us it is solely about developing the car, getting more consistency with the car. That's the focus at the moment."

Garth Tander  ›
15' Holden Racing Team ›
2014 Castrol Townsville 500 – Driven by TAFE Queensland  ›
Stay In The Know
Sign up to the Virgin Australia Supercars Championship Newsletter
We use cookies to ensure that we give you the best experience on our website. If you continue to use this site we will assume that you are happy with it.Ok