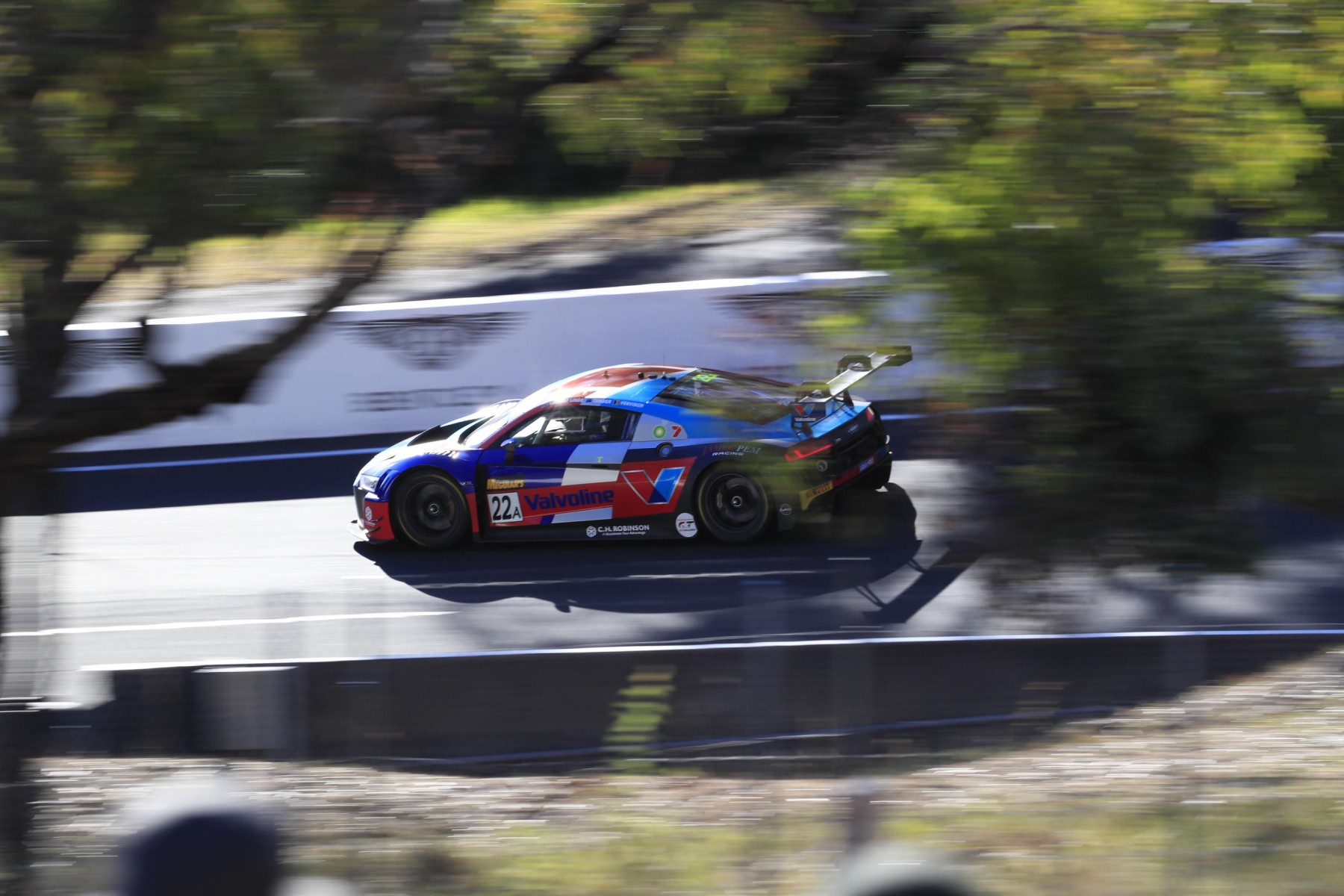 Garth Tander leads the Supercars charge at the halfway point of the 2018 Liqui-Moly Bathurst 12 Hour, while Chaz Mostert and Jamie Whincup have starred.

Tander is second in his Audi, Mostert led the first quarter of the race in a BMW currently seventh and Whincup charged up the order with his Mercedes 11th.

The high-profile McLaren of Shane van Gisbergen and Craig Lowndes, though, is in the garage with persistent overheating issues, more than 10 laps down.

The #22 Jamec-Pem Audi of Tander, Kelvin van der Linde and Frederic Vervisch has been a quiet achiever.

It has maintained a strong pace and stayed out of trouble as a number of other contending cars were served penalties for restart infringements.

Tander got into the R8 LMS during the fifth hour, then jumped from third to the lead when it did not take tyres during a pitstop early in the sixth hour.

He relinquished it to the sister Jamec-Pem Audi driven by Christopher Haase - who did take fresh rubber - just before the ninth Safety Car period approaching the top of the sixth hour and sits second with 131 laps complete.

Mostert dominated the first stanza, starting from pole and building a lead of nearly 40 seconds in the Schnitzer Motorsport BMW before making his opening stop.

While a Safety Car period wiped his advantage, the Tickford Racing driver led by nearly half-a-minute again before pitting to hand over to Marco Wittmann nearing the end of hour three.

Wittmann remained at the pointy end, but served a drive-through penalty for an infringement coming back to a Safety Car restart.

That dropped the #43 BMW to 10th, and the car is now seventh with Augusto Farfus behind the wheel.

The Steve Richards Motorsport BMW M6 has risen through the order impressively, having started at the back of the grid after it was excluded from qualifying for a boost infringement.

Timo Glock carved his way through the field in the first stint, with Richards leading briefly during his stint before handing over to Philipp Eng, who is currently fourth.

Whincup climbed aboard the SunEnergy1 Racing Mercedes for the first time three-and-a-half hours in with the entry 16th, after amateur driver Kenny Habul completed his required laps.

The seven-time Supercars champion made quick progress into the top 10 and then top five, and was closing on Porsche race leader Patrick Long just after the 100-lap mark.

Within two tenths of top spot, Whincup pitted to hand the Mercedes over to Raffaele Marciello.

The car remained in the outright fight with Marciello pitting from third after his opening stint as Tristian Vautier jumped back in just before the clock reached six hours to sit 11th.

“We’re certainly in the race, it’s all nice and straight. Not sure where we’re going to pan out with the fuel or everything.

“I just keep nudging people accidentally because the bonnet is a foot longer than the Commodore’s.

“I’ll go have a couple of sandwiches, hopefully car’s still running at the end and I can jump back in.”

The high-profile YNA Autosport McLarens have endured a tough first half.

Scott McLaughlin’s Pro-Am 650S is 17th, the car having lost two laps early with communication issues around a driver change.

It has, though fared better than the van Gisbergen/Lowndes Pro car, which lost five laps when cooling issues forced it into the garage.

Lowndes spent time in the top five, but fell out of the top 10 during the fifth hour before pitting.

“I’ve been told that if the McLaren overheats it retards the engine and loses power,” Lowndes said.

“It was a shame, we were just trying to stay out of trouble before handing over to Shane.

“Obviously with the temperature rising it lost power.

“The boys are doing a good job to try and get it back out there.

“The car was good mechanically, other than the temperature problem.”

With van Gisbergen circulating outside the top 20, the #58 McLaren returned to the garage 20 minutes before the halfway mark.

Cameron Waters is the second-best Supercars driver in the order in 10th in his Strakka Racing Mercedes, two spots ahead of the Objective Racing McLaren featuring Tim Slade.

Brad Jones Racing Supercars driver Slade led for a phase of the race in the third hour, while running out of pitstop sequence.

The Mercedes of David Reynolds and Audi of Will Davison sit 19th and 22nd.

Lee Holdsworth’s Audi was an early retirement after a crash at the top of the Mountain with car owner Marc Cini behind the wheel.