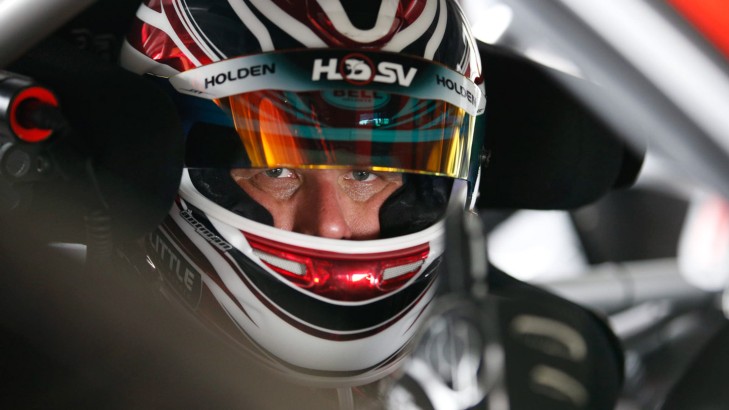 Garth Tander has admitted being punted off the road twice in two V8 Supercars events by his Holden Racing Team teammate James Courtney has soured their relationship and he is unsure if it can be fully repaired.

And while Tander insists he will continue to behave professionally toward Courtney "things won't be quite as rosy as they were."

Tander's comments were in contrast to a FOX SPORTS news story last week in which Courtney said he and Tander had no issues.

"It's not a matter of us hating each other, it's just a s**t sandwich that we have to chew and swallow.

"That's the problem when you've got a quick teammate and are racing in a similar bunch at the front together things are inevitably going to happen."

Courtney out-braked himself into turn one of Race 11 at Winton and took out both Tander and another Walkinshaw Racing squad member, Lee Holdsworth in the Team 18Holden Commodore VF.

In Darwin Courtney tangled with Tekno Autosport's Shane van Gisbergen off the restart of Race 13 and then tagged Tander's rear-end, robbing both of them of the chance of a podium finish.

Asked last week how he felt the two incidents were going to affect the way he and Courtney related and worked together, Tander replied:

"I am not sure. It has happened twice in a row now so it is starting to get frustrating to be honest.

"The first one you could probably cop; he out-braked himself, didn't read the situation right, and got me.

"The second one, I think probably a bit harder to take, given that there has certainly been no admission that any error has taken place.

"So harder to rectify that, harder to come back from that. What that means for the future I am not too sure, we will have to wait and see."

Tander's assessment of the situation is surprisingly blunt given others in the organisation have tried to play down the ramifications of the two doses of 'friendly fire'.

"It's two stupid incidents that never should've happened. JC knows that and he's had everyone on his case reminding him that it's something that shouldn't happen.

"But look, these are racing incidents, if it happens once it's bad, if it happens twice it's something to take issue with, but we've gone through that,we forget about it.

"That was Darwin and we are united as a team going into Townsville."

Tander confirmed he had no intention of seeking some form of on-track redress from Courtney at the July 10-12 Castrol EDGE Townsville 400.

"Look it's resolved, because we are not going to go to the next race and play silly buggers. That's no good for anyone involved," he said.

Tander's comments are a rare sign of disharmony between him and Courtney. When the latter joined the team in 2011 there were widespread predictions their vastly contrasting characters would clash badly.

But that has not been the case, with the two former V8 Supercars Champions proving through a challenging rebuild of HRT to be effective teammates.

"That will continue for sure," said Tander. "That won't change drastically, it's just that things won't be quite as rosy as they were."

The latest controversy continues a season of confrontation for Courtney who had a run-in with Will Davison at Symmons Plains followed by a face-to-face slanging match and then infuriated Ford fans when he said he expected Prodrive Racing Australia to "step on their d**k" and not be Championship contenders.

Lowndes aims for 101 and one

New livery for Caruso in Townsville