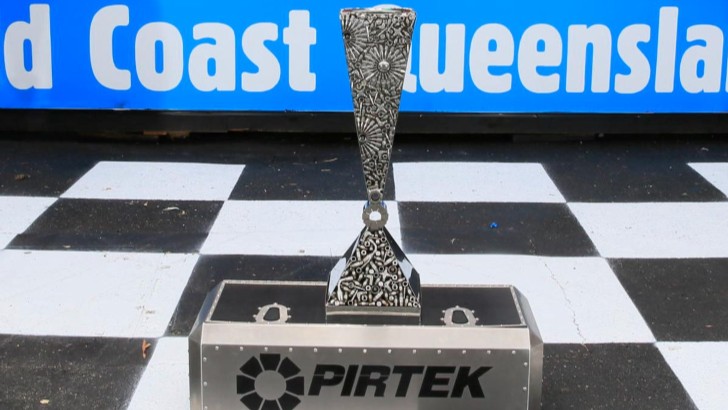 Warren Luff has become the first two time winner of the PIRTEK Enduro Cup, joining with Garth Tander to be the best team in the V8 Supercars endurance races for 2015.

It also represents the first time that the trophy, which contains 400 parts available from the PIRTEK catalogue, has been wrested from the grasp of Red Bull Racing Australia - however it still hasn't been won by any manufacturer other than Holden.

In a double celebration for HRT, the race today was taken out by a resurgent James Courtney and Jack Perkins - Courtney returning after a broken rib and punctured lung suffered in a freak accident at Sydney Motorsport Park earlier this year.

Van Gisbergen and Webb elevated themselves to second in the pointscore 48 points behind the victor, with Winterbottom and Owen third, some 63 points off the HRT duo having come into the weekend leading by 78 points.

Craig Lowndes and Steve Richards were three points adrift of Winterbottom and Owen in the PIRTEK Enduro Cup chase.

For the first time, all four races in the PIRTEK Enduro Cup fell to different combinations - Wilson Security Sandown 500 to Winterbottom/Owen; the Supercheap Auto Bathurst 1000 to Lowndes/Richards; race one at the Castrol Gold Coast 600 to van Gisbergen and Webb and the final race to Courtney and Perkins.

Thus brings to a close another thrilling PIRTEK Enduro Cup chase. It continues to grow in stature among the V8 Supercars fans and drivers year to year and will be back with the Sandown/Bathurst/Gold Coast trio in 2016.

2015 Castrol Gold Coast 600  ›
Stay In The Know
Sign up to the Repco Supercars Championship Newsletter
We use cookies to ensure that we give you the best experience on our website. If you continue to use this site we will assume that you are happy with it.Ok