How could you go past the 2010 finale for Sydney Olympic Park’s best? The championship was won in the pit lane, crew against crew, as minnows Dick Johnson Racing raced heavyweights Triple Eight to repair crunched cars after they were commandeered by wild weather in Saturday’s race.

James Courtney, Jamie Whincup and Mark Winterbottom were all still in mathematical contention and this finale proved that anything can happen – especially when you add water.

DJR was running old Triple Eight Ford equipment, while Whincup was chasing his third consecutive championship in a strong era for the Roland Dane-led squad.

Once the rain hit, drivers were practically skating on ice in their Supercars and it wasn’t long until all three contenders were “in the fence”, the call the incident is now known for.

Pulling into pitlane both were in strife – but quick hands at DJR had Courtney back out on track while Triple Eight was still working away at the front of the lane. 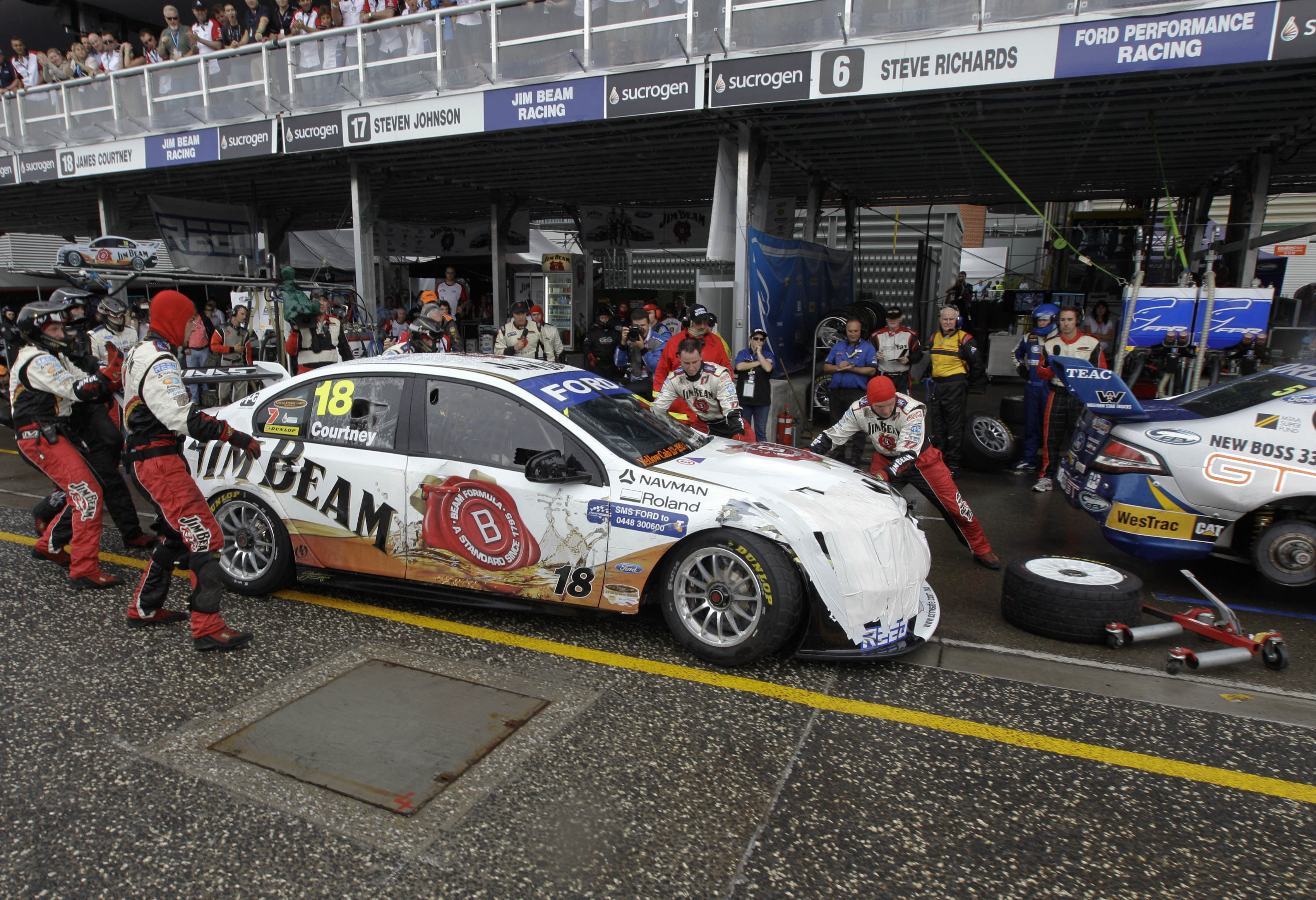 Courtney was the only one who was awarded points as Whincup failed to cross the line in enough time to be classified a finisher. It meant Courtney had a 113-point lead into the final race of 2010 ahead of Whincup, while Winterbottom’s result put him out of the fight altogether. 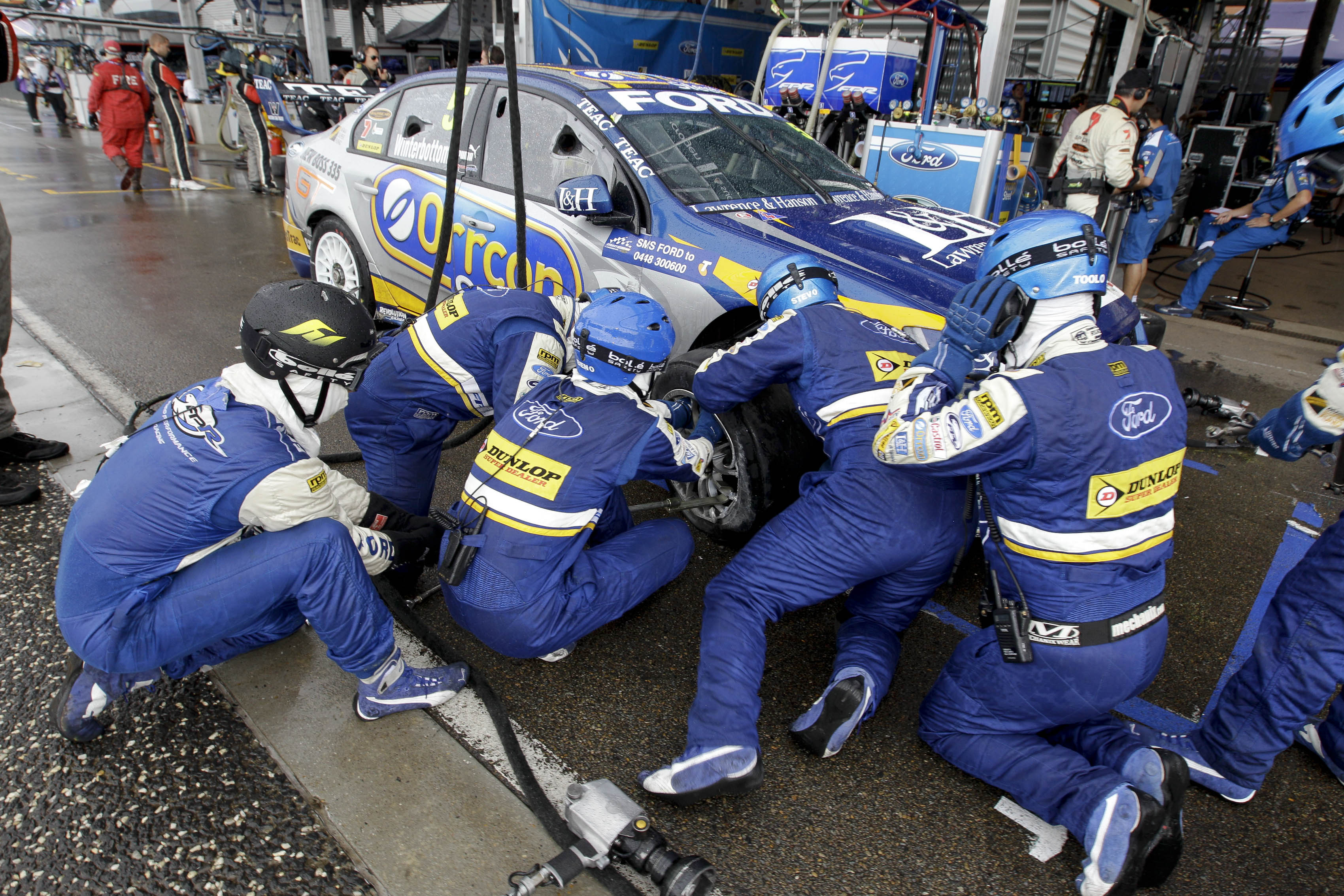 The next day, Courtney was only able to finish 14th – but it was enough for victory over Whincup, who was fifth while Lee Holdsworth won the race.

Reflecting on that weekend with supercars.com, now Holden Racing Team driver Courtney said he couldn’t quite take it all in back then. The race that earned him the championship victory was his last with DJR, shifting to HRT the following season and taking the #1 with him.

“At the time you’re so engaged and involved in it, you’re too busy focusing on everything around it; but now looking back at it, it was an awesome time,” Courtney told supercars.com.

“I suppose it was very rewarding for us as a unit with the group of guys.

“We were very much the underdogs, the poor cousins of Triple Eight using their old stuff. To take them down and beat them with their old equipment shows that they’re beatable. Prodrive did it last year, it’s just a matter of everyone doing their job correctly, extracting the most out of it.

“Yeah, it was a very rewarding time and something I’ll always remember.”

Looking back still smarts for Whincup, who spoke to supercars.com in detail about that finale back for a reflection piece back in 2013.

“That certainly wasn’t a good experience for me, it was probably one of the lowest experiences of Triple Eight in the modern era, where we just couldn’t get the car fixed and back out,” he said.

“In saying that, we felt proud enough that we wanted to put the car together properly to get back out. There’s still debate whether the other car was put together properly – but you can debate that all you like. At the end of the day, we didn’t finish enough races and that’s what cost us.” 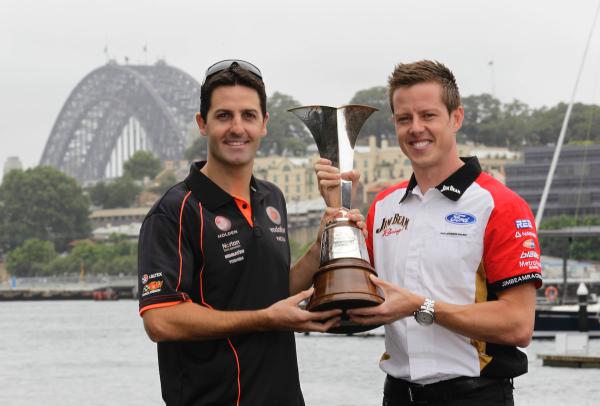 Then-rookie, now Bathurst 1000 champ Jonathon Webb scored his first Supercars race win on the Saturday, having made the early call to change to wet weather tyres while others slipped around on slicks.