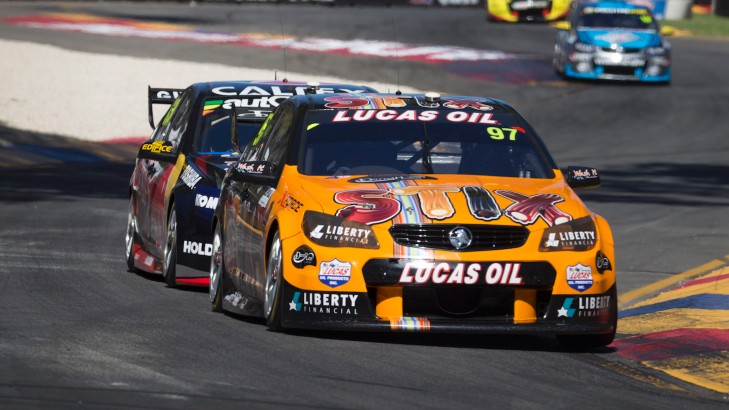 Shane van Gisbergen's confirmed move to Triple Eight has blown an already competitive driver market wide open as a number of drivers hunt for a home for 2016.

The kiwi's move to the Roland Dane-run stable means there is a new and very competitive seat available at TEKNO, which runs T8 equipment and managed to catapult van Gisbergen to second in the Championship last season.

While its operations moving forward have not been confirmed, Dane suggested to v8supercars.com.au his preference would be to work as a four car group, pairing TEKNO's single entry with the third car in his Triple Eight crew.

That could make the seat a potential entry point to Triple Eight - therefore a coveted spot in pit lane.

While the three biggest names are now taken care of - Jamie Whincup and van Gisbergen at T8 until 2018, Craig Lowndes '17 - there's plenty more in the available talent pool for 2016.

Fabian Coulthard, David Reynolds and James Moffat are all off-contract at the conclusion of the season, with young talents Scott Pye and Cameron Waters also looking for a way into the game full-time.

Interestingly, teams have also been sniffing around Bathurst winner Chaz Mostert, with rumours of him being on a 2+2 year contract - though team boss Tim Edwards has played it down and warned competitors away.

While Pye - who is managed by Dane - may seem the obvious choice for the hole at TEKNO, Dane suggested a full-time drive for 2016 would be most likely at DJR Team Penske, which is almost certainly set to expand to two cars for next year.

"I think his best chance is probably where he is (DJR Team Penske), but again that is up to them," Dane said in an extended chat with v8supercars.com.au.

Pye is not believed to have a contract with the newly fused team beyond this season's Pirtek Enduro Cup and as it stands, the new bosses haven't yet seen him drive the car.

Coulthard last year was clear that he was happy with current home Brad Jones Racing, with whom he sits second in the Championship after recording a win at the season opening Clipsal 500.

Prodrive Racing (Australia) publicly stated ahead of the opening round that Reynolds would need to perform this year if he was to maintain his value as a driver, having just one win and a second placing at Bathurst to his name.

Up-and-coming star Waters is signed to PRA and contests the V8 Supercars Dunlop Series in one of their older generation Falcons - he has been developed by the Ford team and will run once again as an endurance driver with the group.

Meanwhile, Moffat has spent the past two seasons at the Kelly brothers' team, now Nissan Motorsport and while he is regarded a talented driver in pit lane, he has only recorded one win in his Altima, as the team pushes forward on development to try and be more consistently competitive. A highlight was second at Bathurst last year with Taz Douglas.

Other potential openings include factory backed seats at Nissan if Todd Kelly decides to step back from racing, after admitting he came close for this season; or Volvo as Garry Rogers intimated David Wall would need to perform in the competitive seat this year.