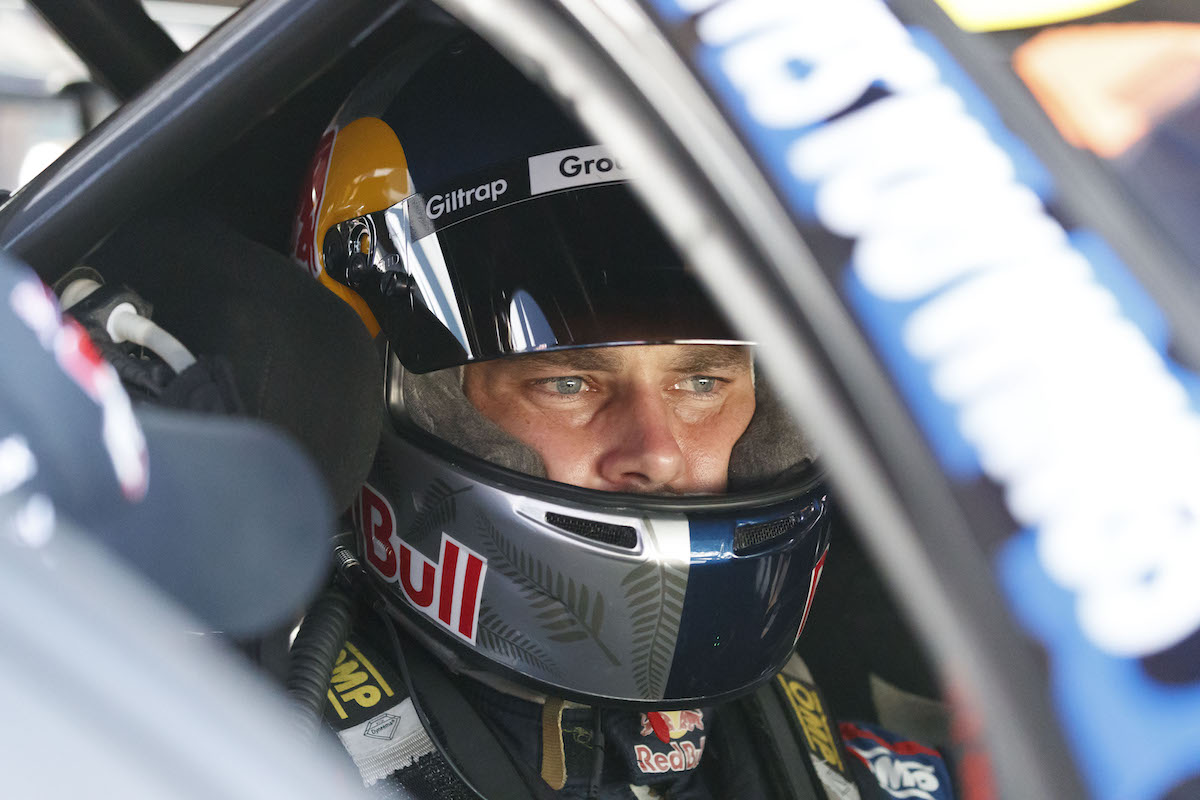 Shane van Gisbergen is prepared to temper his attacking style in today’s 250km race at the Coates Hire 500 in which he could collect his first Virgin Australia Supercars Championship.

But only a bit…

Having successfully dialled in his Red Bull Commodore with lap record-breaking pace yesterday, van Gisbergen has set himself the task of qualifying up-front today and racing cleanly to at least fifth place.

The 27-year old leads RBRA team-mate and six-time champ Jamie Whincup by 191 points with a maximum 300 points to be won across two 250km races this weekend. But even if Whincup wins on Saturday a van Gisbergen fifth guarantees him the title.

“I would be happy if I got fifth on Saturday,” van Gisbergen said after setting fastest time in Friday practice in extreme heat at the tough Sydney Olympic Park street circuit.

“I am going to do my best to get the best result on Saturday and see how we end up.”

“It’s obviously not done the championship, it is still possible to lose it, and on Saturday I think we need to have good qualifying, start up the front and stay there out of trouble.

“That was what today was about, get the car fast and comfortable. We managed to achieve that, a few little things to tweak, but we are in a good position."

Van Gisbergen professed himself happier with his car than Whincup, who was third fastest, although he felt there was still time to be found on soft tyres in today’s qualifying.

“I think there is a little bit to work on,” van Gisbergen said. “We are certainly not happy with the car, parts of the track are good, parts not. The first half of the lap was really good and then in the last sector I was nowhere.

“It’s a compromise around here with the kerbs and the style of corners so definitely just excited to drive the soft tyre.

“We are a second or so faster than last year and the kerbs and the grip is pretty awesome.

“With the tyres I stayed on the same set all day and the rise in grip was a pretty good feeling.”

A relaxed van Gisbergen confirmed he had not spent too much time pondering the championship situation since since the last round of the championship in his native New Zealand despite not having any racing commitments.

“I thought I would be pretty bored for three weeks but filled it in pretty quick, going to the Supercross here one weekend, over in New Zealand last week,” he said.

Van Gisbergen took flight number 97 to Sydney for this event – which is the same as his racing number. He will fly 106 times by the end of the season, as he has more international races to complete after this weekend.

Van Gisbergen has an incredibly strong record at Sydney Olympic Park, having won the 250km Sunday race here for the last three years.

This is the last year the VASC races at the temporary circuit before moving the finale to a new Newcastle street circuit in 2017.

“I am not sure why, but it’s always good here and I will be sad to see it go just because of the results I have had,” said van Gisbergen.

“I have enjoyed it a lot I think next year’s venue looks pretty exciting.”

Van Gisbergen agreed with Whincup’s assessment that the surface was getting more worn and slipperier. That combined with the use of the soft tyre could make results more unpredictable, he said.

“The track has gone away a little bit and one of the characteristics of this track is a lot of braking and a lot of traction zones and that really wears the tyres – especially the rears – a lot,” he said.

“So for us it is a bit of an unknown. We didn’t have too much tyre degradation the last few years on the hards, so it is going to surprising, especially if it is almost in the 30 degrees temperature.

“Even today, I was still doing reasonable laps on my first set and they had done all of those practices.