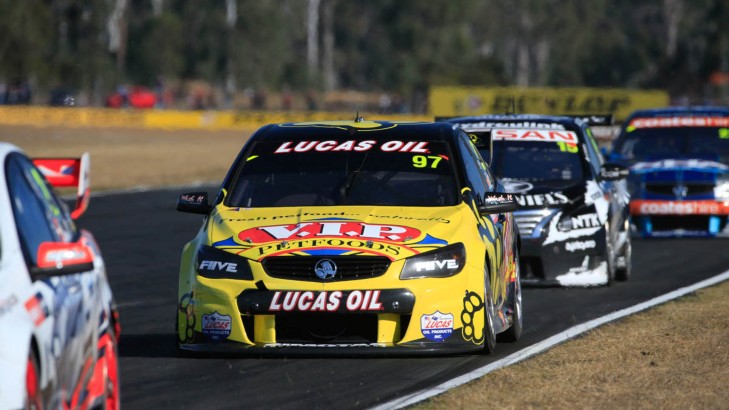 Championship contender Shane van Gisbergen seemed relaxed on Sunday night post-race, despite running in the mid-pack for most of the weekend at Queensland Raceway.

Climbing from 15th to 10th during Sunday's big points race, the young Kiwi's points haul across the three races was not enough to hold on to fourth in the standings. Van Gisbergen has now dropped behind 200km race winner James Courtney and countryman Fabian Coulthard to sixth overall.

However, 'SVG' felt the points earned across the weekend were okay, and emphasised the importance of staying within 300 - what is awarded to the winner over a race weekend -to be there when it counted in December.

"We're within a weekend of the lead, within 300 points," van Gisbergen told v8supercars.com.au.

"Bathurst is worth 300 points, so you've got to get past Gold Coast to see if you're in the hunt or not.

"But we're in the top six and quite a fair way ahead of the guys behind, so we've just got to look forward."

While 'SVG' and the TEKNO team had been positive after a recent test day at the circuit, the findings did not seem to translate for the race meeting -a trap a number of teams fell into.

"It was quite a radical way we started - we found quite a good thing at the test and it was alright in Friday practice, we were up there all day.

"We qualified alright, but when we got into the race it wasn't so good.

"So you learn these things and here's the place to do it, because we tried a lot of combination this week.

"I guess we just sneak back to being simple, but we learnt a lot as well.

"It's so different testing here to racing, the track is so different - you leave feeling awesome at the test, and you come here an the car's completely different, so we just have to work on it and hopefully turn up at the next round competitive."

On Sunday, qualifying was the hard part with the first 19 cars within 0.5 seconds. Just 0.1sec separated ARMOR ALL Pole Position from second, with fifth and sixth split by an amazing 0.0001.

Van Gisbergen emerged 15th after the 20 minute session at the hard to pass six corner circuit, and managed to just break into the top 10 over the 200km.

"We weren't too bad, we were seventh for the weekend," van Gisbergen said.

"It's so hard to pass these days with everyone so close and we made four spots from where we started.

"But if you don't qualify in the top five, you don't race there, it's quite hard to do. We've been ok. We were top 10 every race but really we need to be top five every race. Really we're just missing a little bit but not too bad a weekend."

With just one Super Sprint event at Sydney Motorsport Park before the beginning of the Pirtek Enduro Cup event, van Gisbergen is confident of hanging in the title hunt.

Pairing with team boss Jonathon Webb - 2014 his first year out of a V8 Supercar after running full-time from 2010 -the two will be a threatening combination at the Mountain in the Triple Eight-built VIP Petfoods Commodore.

"We're up there - we're one of the top guys (paired). That's one of our biggest strengths heading into the enduros - good car and good co-driver. He's not far off me in test days, so hopefully he's on the pace."

Heading into the Coates Hire Ipswich 400, the drivers from third to sixth were separated by less than 10 points, though the gaps have now widened.

First and second have extended the lead, with Jamie Whincup on 1790, 15 ahead of Winterbottom, with Lowndes third and 162 points behind the leader.

Shane van Gisbergen  ›
15' Team Darrell Lea STIX ›
Stay In The Know
Sign up to the Repco Supercars Championship Newsletter
We use cookies to ensure that we give you the best experience on our website. If you continue to use this site we will assume that you are happy with it.Ok