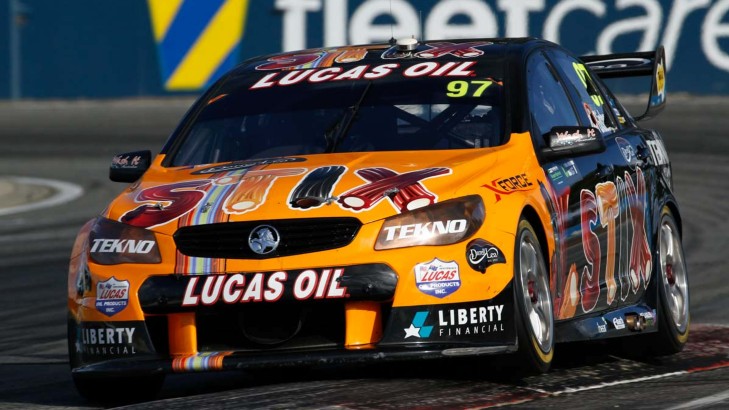 His now customary Perth blip behind him, Shane van Gisbergen is confident he is set to resume his front-running ways at next weekend's Winton SuperSprint.

The Team Darrell Lea STIX driver posted fourth, 24th and 14th place finishes in his TEKNO Holden Commodore VF at Barbagallo Raceway in the UBET Perth SuperSprint to finish the weekend dropping from as high as second to equal sixth in the driver's Championship, 122 points behind leader and future team-mate Craig Lowndes in the Red Bull Racing Australia Holden Commodore VF.

"I think the points are probably a little bit more spread out than they were before the round, but it is still way too early to be thinking about the Championship," van Gisbergen told v8supercars.com.au.

"It is disappointing not to get enough points, but there is another race coming up then we will try again."

At Winton in 2014 van Gisbergen qualified second twice and third once but emerged only with a second, 12th and 20th places because of mechanical issues.

Avoid a repeat of the mechanical issues and he is confident of strong form at the tight and twisting Victorian country circuit.

"We just have to go there with a similar car and knowing what we have learned in the last year or so and charge on," the 2014 drivers' championship runner-up said. "This time last year after Perth is where we started travelling strong again.

"So I am looking forward to having a crack and getting back in the points.

"I remember last year was funky with all the rubber down and all the track sealant and we were three seconds faster than we ever had been.

"So that won't be the case again this year so we will have to go back to doing an old style car. But it is not a bad track and I do like trying to get a time out of it because there is a lot to it."

While the Kiwi flier has never managed a podium in the Western Australian round of the V8 Supercars championship, this year's form actually reinforced his confidence rather than detracting from it.

"I could actually feel the car working this year," he added. "I could feel the changes we were making and I had speed most of the weekend.

"We went there with a very different set-up from last year and it was much better. On paper it doesn't look good but it was more promising than last year."

Van Gisbergen's true WA pace was reflected by his fifth place qualifying and fourth place finish in Saturday's opening 60km race seven. But after being held up during his qualifying run for race eight and starting only 18th, the team elected to slither around on old Dunlop tyres and conserve a new set for Sunday's 200km race nine.

He qualified ninth for that and was planning to run an unusual three-stop strategy; starting on softs, then having stints on two sets of new hards, before swapping back to the softs for a sprint to the flag.

But the safety car that paved the way for drivers on a hard-hard-soft strategy to race to the front, it also meant van Gisbergen never got back on his softs and he finished 14th.

"We didn't have the best car but I think Geoff (engineer Dr Geoff Slater) said we would have been fifth or sixth if there was no safety car," van Gisbergen said. "But there is no other way to explain it, the safety car ruined our day and worked for others.

"That's just the way it goes."

Van Gisbergen admits his poor record at Barbagallo is a bit of a mystery to him.

"One race I had was really good there in the Stone Brothers days," he recalled. "I was running second or third and the pit limiter came on for no reason ... it's just one of those tracks.

"There have always been promising times but it has just never worked out.

"It's not just the car it's a bit of me as well and the way that surface is and the way the corners are it is more of a car track than a drivers' track."