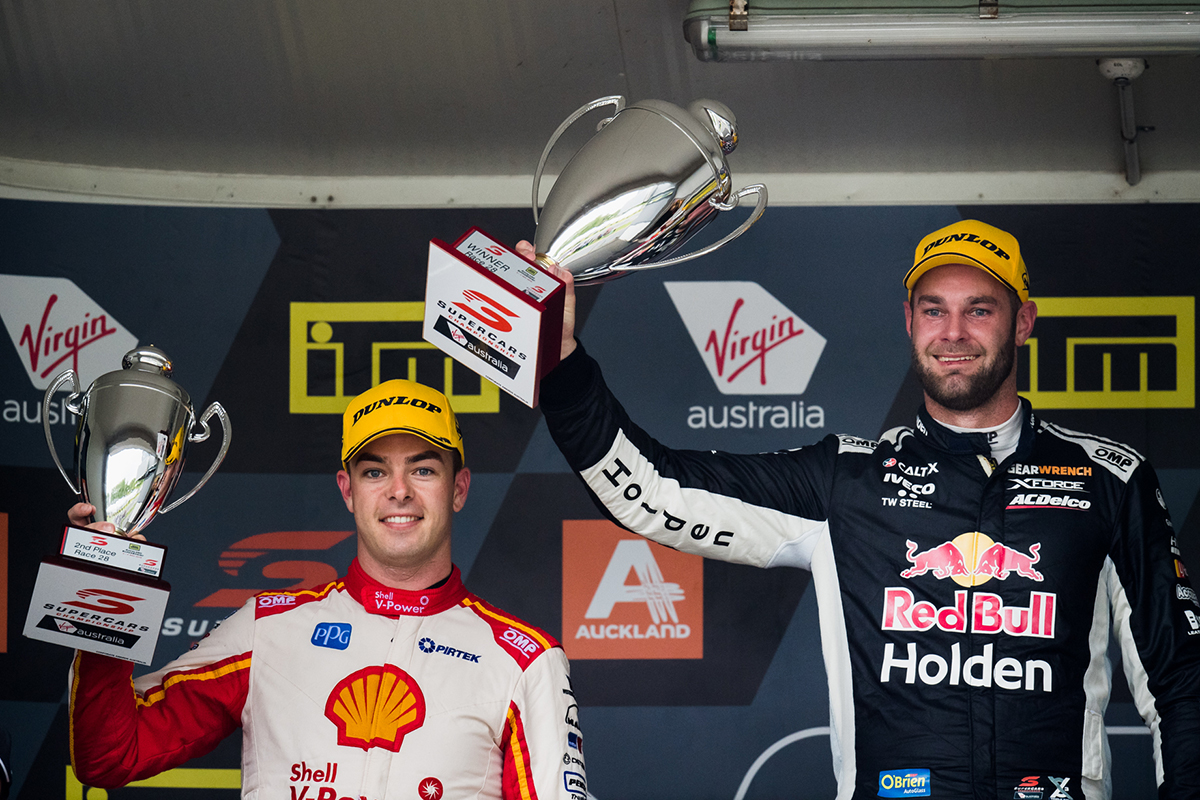 Shane van Gisbergen apologised to rival Scott McLaughlin over an unusual post-race incident at Pukekohe that was labelled an act of intimidation by commentator Mark Skaife.

After coming out on top in an intense 200km contest, van Gisbergen parked his Red Bull Holden so close to the Shell Ford in the parc ferme area that McLaughlin was initially unable to exit his car.

DJR Team Penske rolled McLaughlin's car backwards so that he could eventually alight and take part in the post-race procedures.

Van Gisbergen is the provisional winner of the race; an investigation on Saturday evening clearing him of a pitlane breach, which was then protested by DJR Team Penske.

Skaife and fellow champion driver-turned-pundit Russell Ingall fired up over the post-race incident on the Fox Sports broadcast, suggesting McLaughlin should have retaliated.

“I reckon he parked him in on purpose. It’s about the intimidation and the gamesmanship,” Skaife said.

“If I’m Scott, I get out of the car, walk around the other side and give him a rev. You can see he’s got the shits, straight away.

“I’d be starting it back up, backing it back and driving it straight into him in parc ferme, and pay the fine.” 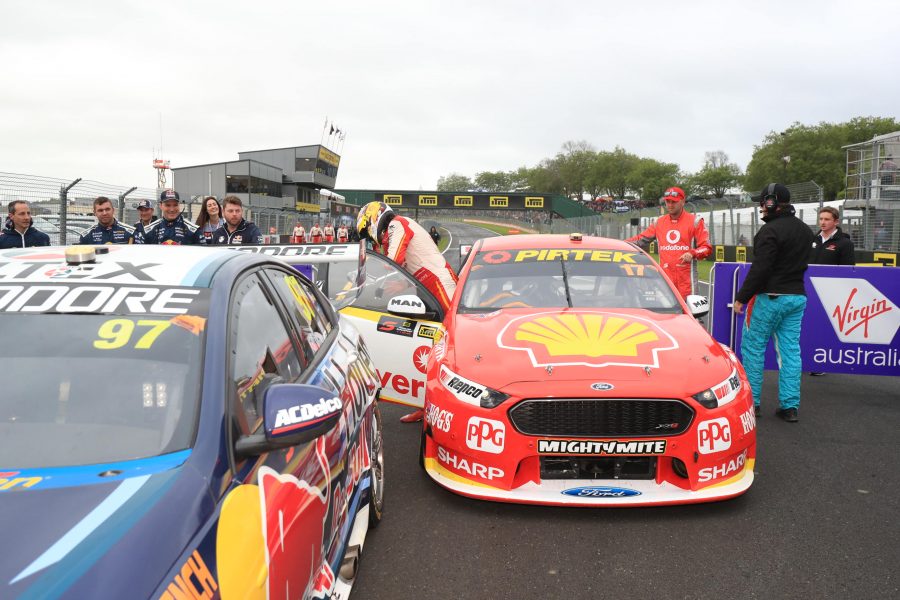 When asked by Supercars.com in the post-race press conference about the issue, van Gisbergen pleaded innocence, before turning to McLaughlin to apologise.

“I didn’t even realise I did it until after, it was pretty awkward,” he said.

“I apologised for that, I was just excited to jump out, get on the roof and start cheering. That was a bit of an awkward one, sorry about that.”

Asked for his view, McLaughlin chose his words carefully, replying “it is what it is. Obviously it was a mistake.”

Van Gisbergen then quipped “I’m sure he’ll get me back for it”, to which McLaughlin dead-panned: “If I win tomorrow and you come second I will.” 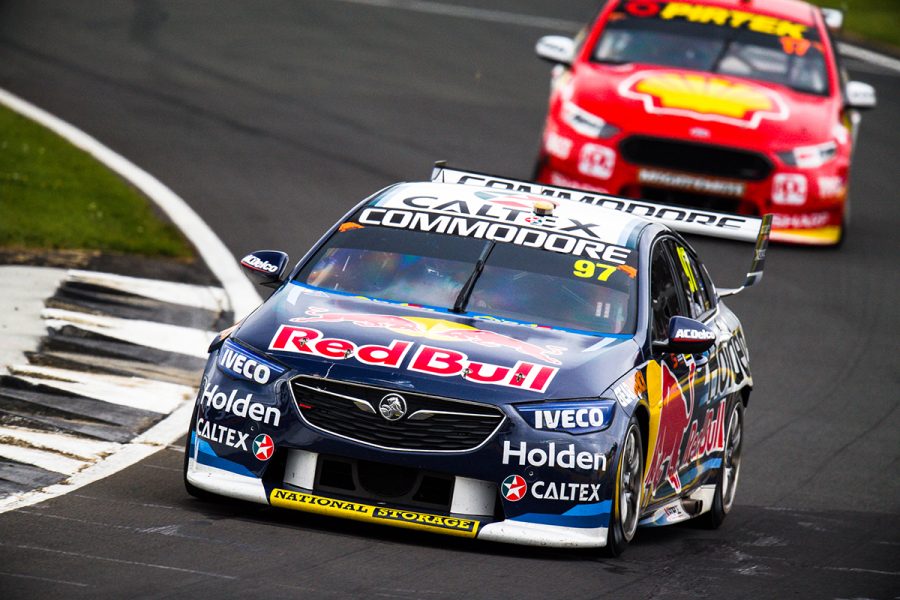 The two Kiwis had battled hard for the win on home soil, with van Gisbergen overcoming a late-race five-second time penalty for hitting the back of McLaughlin in their scrap.

It was the latest straight-fight between the title contenders to be won by the aggressive van Gisbergen, who is now just two points shy of McLaughlin in the standings.

Agreeing with Skaife’s assertion that McLaughlin should have retaliated over the post-race incident, Ingall added: “Scotty has got to make a decision now, does he want to race that hard.

“Does he want to lift his game? Shane has thrown it out there and said ‘this is how I’m going to play’.”

Later on Saturday evening, McLaughlin made light of the situation via an Instagram story. 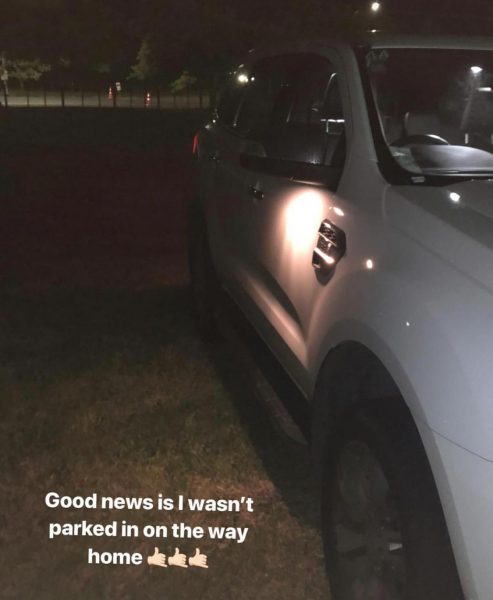 The Red Bull HRT also chimed in via its Twitter account, amid heated social media chatter among fans over the incident.

We never said he was good at parking the car ?? #whoops #redbullholden #VASC pic.twitter.com/UmJAvdjyLL