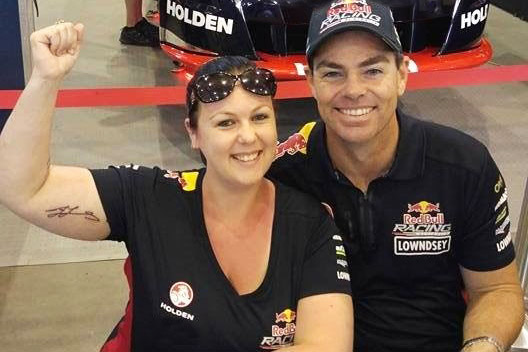 Long-time Craig Lowndes supporter Louise Ridding has been announced as the winner of BP Australia’s ‘The Ultimate Day Job’ competition.

It comes as BP advertised for the position on LinkedIn, in search of a Supercars fanatic to rub shoulders with the drivers and staff members on-ground at a race event.

More than 1000 entries were received and strict criteria was put in place to ensure the most passionate fan was recruited.

This included someone who has at least five years ‘experience’ in Supercars obsession and fluency in ‘Larko-isms’.

Ridding, a mother-of-one and car mechanic from the NSW town of Port Macquarie, ultimately got the nod – with proof of her love of the sport in the form of Lowndes’ signature being tattooed on her right arm.

“I was so excited when BP rang me to share the news that I had won The Ultimate Day Job,” she said.

“I’ve been following Lowndes for so long, so thought what better way to show the world I’m his biggest fan than with a tattoo!

“I’m sure the competition was fierce for this role, so this is a dream come true to be given the opportunity to head behind the scenes on the race track of the Supercars Championship and work with the drivers and their teams who I watch compete every year.”

Given current COVID-19 protocols in place, Ridding’s opportunity – for which she can bring a plus-one – will come at a Supercars event in 2021.

“We received an overwhelming amount of entries from Australia’s most passionate Supercars fans,” he said.

“It was a close call, but Louise really stood out to us for her dedication to the local motor vehicle industry and commitment to Supercars. We’re excited to see Louise trackside in 2021 at an event to be decided on.”

BP Australia is the official fuel supplier of the Virgin Australia Supercars Championship.