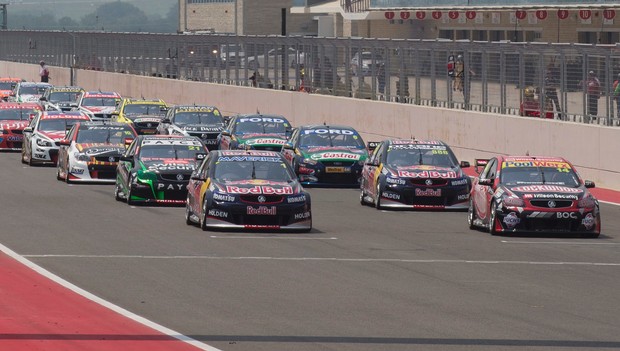 A substantial list ofpotential actions is currently being considered as part of V8 Supercars’ ongoinghunt for cost reduction.

The review follows on fromthe adjustment of tyre allocation and testing days as a way to help teams copewith the expense of the changeover to the new Car of the Future technicalregulations at a time when revenues are down.

V8 Supercars independent commissionerChris Lambden has overseen the formulation of the document proposing the areaswhere savings can be made.

It has been developed in thewake of consultation between the V8 Supercars Commission and teams at a forumin late 2012.

“The background of this isthat at the Commission there are two standing items always; one is cost containmentand the other one is the quality of the racing,” explained V8 SupercarsCommission Chairman Mark Skaife.

“What I would call the easypickings have happened. A lot of the initiatives now become more complexbecause what saves money for one team doesn’t necessarily save money foranother team because the respective business models don’t always line up.”

Items on the list forconsideration are as diverse as a limit on brake consumables, a reversion to asingle compound Dunlop control tyre in 2014, the introduction of acategory-wide front splitter flexible mount – or shock absorber – and evenkicking off the action later on Fridays at three-day rounds so team personnelcan fly in on the day rather than be accommodated on the Thursday night.

The potential category-wideexpense of a shift to fly by wire throttle from cable actuation has also beendelayed from 2014 to 2015, as reported separately here.

There will also be acontinued push to smooth off the sometimes aggressive approach angles on kerbsto ease shock absorber and wheel damage, such as the Gold Coast first turnchicane.

“The Commission is workingvery hard on those initiatives because the way that the business is we would bederelict if we weren’t looking at costs,” Skaife told V8Supercars.com.au.

“There is a lot of workbeing done on this (cost reduction),” Skaife added. “I find you have to have asensible business approach to it and it doesn’t need a knee jerk reaction toit. It needs sound thinking.

“With Car of the Future wehave a business model as a cost benefit analysis, so anything we change we canput it in the business model and pop out the end as a result. That is what weare doing at the moment.”

Items that have been putunder longer term review or on hold include the use of twin springs, the usagelimit of key parts such as engines and the total number of people a team ispermitted to take to each event.

23/05/2013
Stay In The Know
Sign up to the Virgin Australia Supercars Championship Newsletter
We use cookies to ensure that we give you the best experience on our website. If you continue to use this site we will assume that you are happy with it.Ok