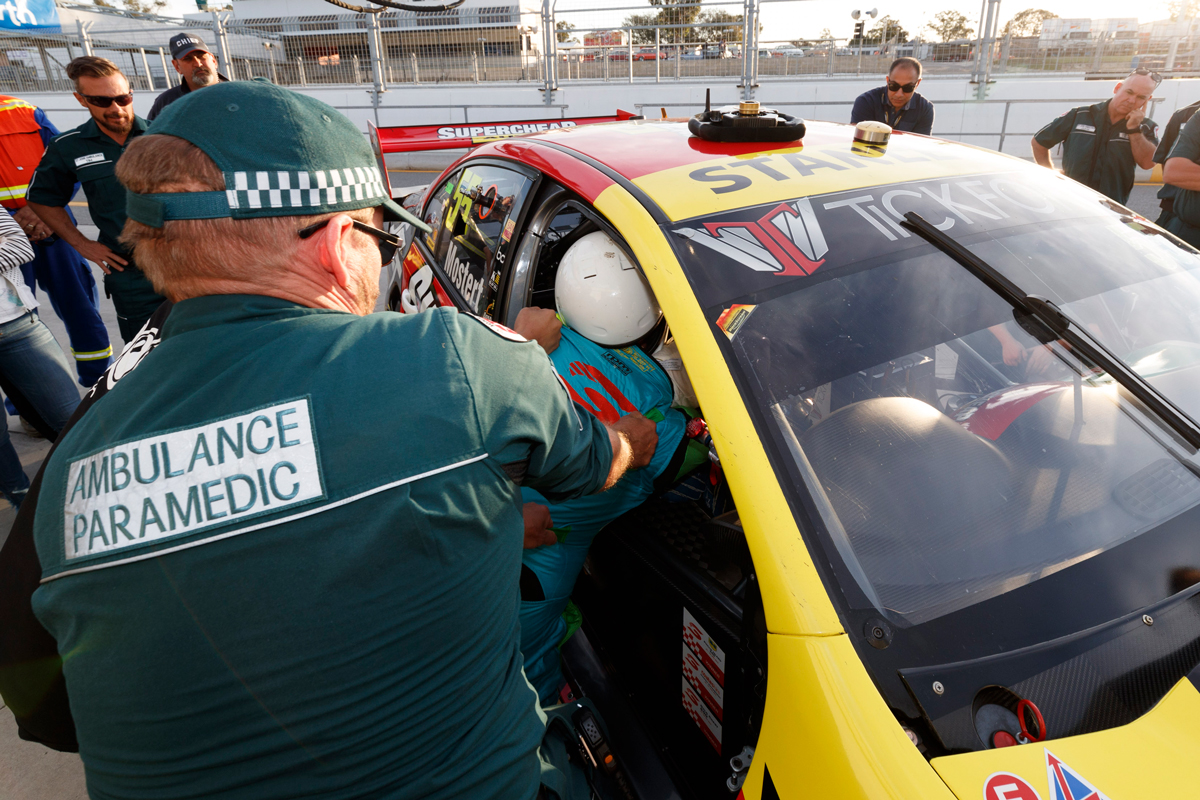 Dr Carl has been Supercars’ permanent doctor since 2008, working with medical teams around the world to provide trauma services in the event of an accident.

Always looking for ways to improve the processes, Dr Carl undertook a detailed analysis of driver extrication in instances where a driver is injured.

In both cases the drivers sustained multiple fractures and were in considerable pain, but were conscious and breathing and not under direct threat from fire. 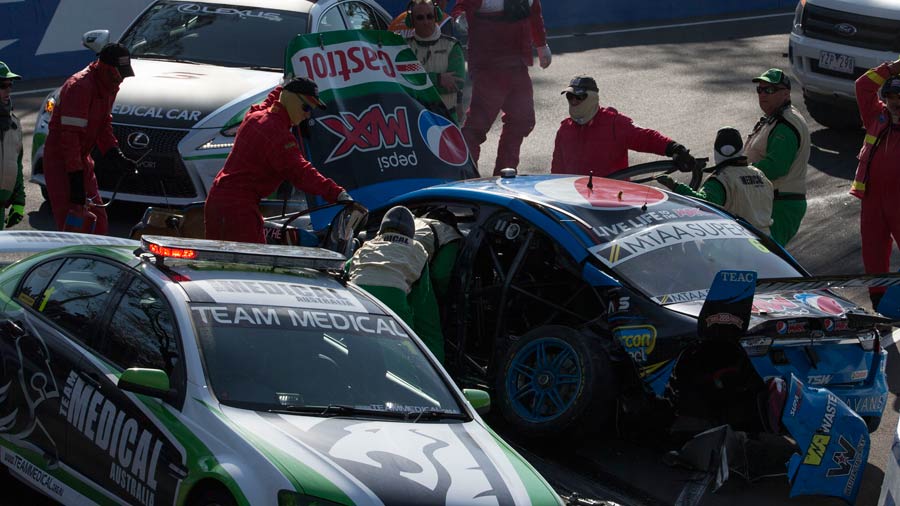 Medical crews attending to Mostert in 2015

Existing driver extrication devices were designed for extricating people from road cars and, according to Dr Carl, not suited to use in a modern race car.

“The Kendrick-type extrication devices are almost impossible to put on in closed-cockpit race cars, and can potentially do more damage to the driver, and causing more pain as you’re putting it on,” Dr Carl explained to Supercars.com.

“If a driver cannot get out of the race car by themselves following a crash, there have been many extrication techniques described.

“In practice, extrication of an injured driver is extremely difficult. I’ve been trying to come up with different solutions to get injured drivers out of crashed race cars as safely and as quickly as possible.

“About eight years ago, I created what I call a ‘Driver-Slider’, which is an L-shaped board made out of carbon fibre that is placed behind the driver.

"It provides a smooth surface to help me slide a driver out of the race seat. It’s really simple and works well.”

Dr Carl’s new extrication technique, is a method dubbed ‘The 3-on-3 Extrication Technique’.

“3-on-3 is combining the strength of three rescuers on one driver, and we do the extrication on the count of three," he explained.

“I asked Revolution Racegear to sew extra straps onto the back of my fire-proof suit during manufacture earlier this year. These have proven to be strong enough to pull a 95kg driver, and myself, out, so far.

“Because the drivers sit so centrally in our Supercars, and with my upper body deep inside as well, I don’t have enough leverage to pull them out by myself. 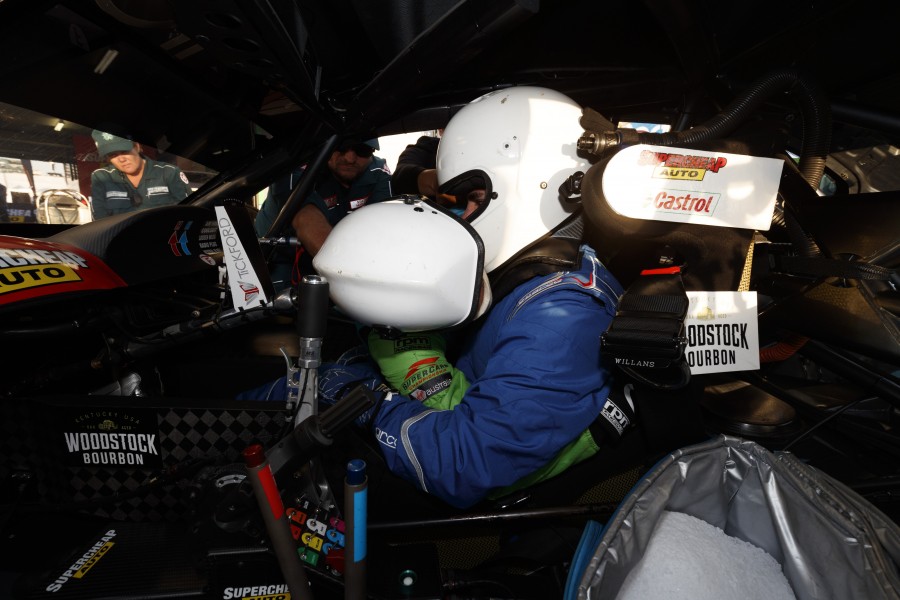 Dr Carl demonstrating the 3-on-3 technique

“So the idea is simply to have two additional rescuers grab me, and pull us both out.

“I’ve been trialling and refining the 3-on-3 technique at each Supercars event this year, and it’s working very well. It protects the driver as they come out, and is the most efficient way I’ve ever used to rescue a driver.

“The combination of these simple ideas are a potential game-changer. You no longer have to decide between the various extrication options. If the driver can’t get out themselves, then I’ll be using the 3-on-3 technique.”

Dr Carl has run a number of trials of the procedure this year and says it’s ready to be used in an emergency, if required. 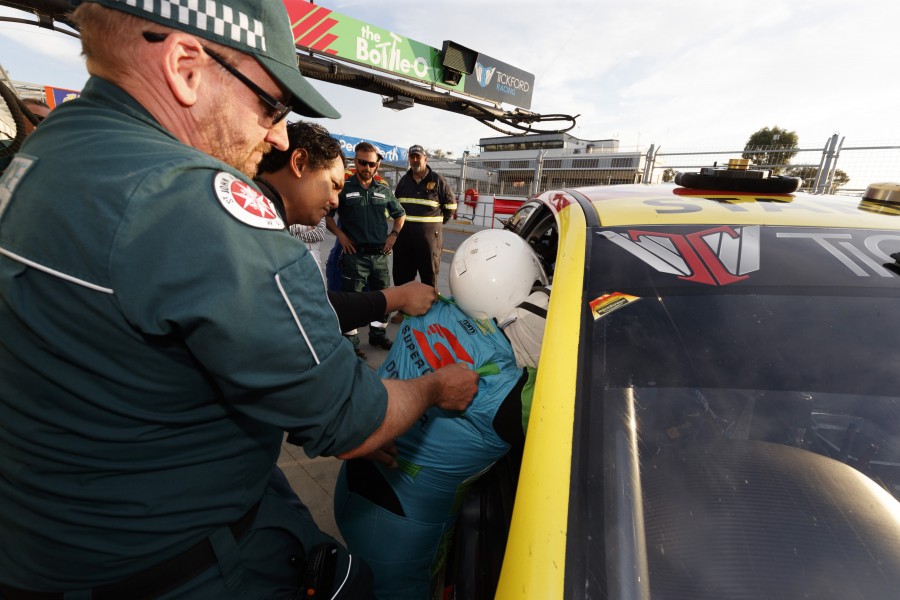 “We’ve had different phases of trialling since Adelaide,” he said.

“I’ve since added another strap attached to my left epaulet. I put that strap around the driver’s back as I embrace the driver, and then grab it with my right arm.

"This then frees my left arm which I then use to immobilise the patient’s head to mine as we come out.

“I had doctors from the Singapore Grand Prix practicing with me at Albert Park, Team Medical Australia officials at Symmons Plains and Phillip Island, and St John Ambulance paramedics assist me in Perth.

“At Barbagallo, we deliberately put in a 95kg driver to practice on. I had to modify a few steps and re-introduce the ‘Driver-Slider’, but it worked.

“Hopefully no one will ever see me perform a ‘real’ 3-on-3 extrication… but I’ll keep practicing and refining it, just in case."