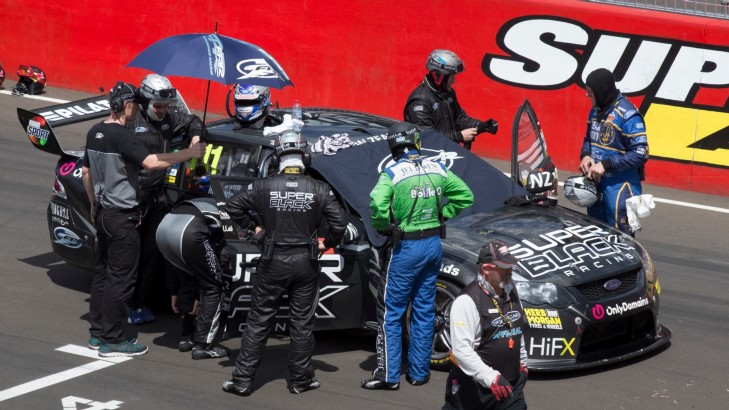 Prodrive Racing Australia has reassembled the crew that fielded last year's successful wild card to back up the Harvey Norman Supergirls at the Supercheap Auto Bathurst 1000.

The team last year prepared a wild card entry for Super Black Racing, which fielded two rookies in Andre Heimgartner and Ant Pedersen. The pair finished 11th at the year's biggest race, despite the huge task they were assigned, and the project was such a success the team is now a permanent fixture in the V8 Supercars Championship, with Heimgartner behind the wheel in the Prodrive four car group.

Prodrive boss Tim Edwards knows the importance of having the right people for the job, and believes the experienced crew will give the girls every possible chance at success.

"It's pretty much the identical crew as last year, there's only one person who has changed," Edwards told v8supercars.com.au.

"So it's a combination of our own staff, our existing Dunlop Series crew, plus some people who have worked either for us or closely in the past.

"Paul Ceprnich is going to be the engineer again, as he was last year, but as I say it's pretty much an identical crew to what we did last year in terms of the infrastructure, the setup in the garage et cetra."

Edwards agreed it was important to have an experienced engineer run the car to help the drivers stay calm and coach them through the weekend, as well as team members who were well versed in pit stop procedure for the race.

Edwards will be on the ground on Monday when de Silvestro and Gracie complete their first test day in the FG X Falcon they'll tackle Bathurst in.

Prodrive's Dunlop Series car will also be on track on Monday at Winton, so category leader Cameron Waters will be present to jump in the girls' car and ensure everything is running smoothly.

The Falcon is the one Chaz Mostert drove in Kuala Lumpur last month, and has an interesting history, being the first Car of the Future chassis Prodrive built when the formula was introduced for 2013.

It was the car David Reynolds won his first race in at the Gold Coast that year, paired with Dean Canto, and was used by Mostert at Albert Park the following year following a huge crash at the Clipsal 500.

Super Black ran it as the wild card last year, before it was adopted by Reynolds for the rest of the season after his big crash at Bathurst in qualifying last year.

So having the first all-female entry since 1998 just adds to the list of achievements for a car that would have seen every Prodrive livery on its panel in recent years.

Edwards was thrilled to be part of the wild card project, saying it was not only great for the team, but for the sport to have such a line-up at the Supercheap Auto Bathurst 1000.

The FG X will hit the track for back-to-back testing on Monday and Tuesday after the girls completed seat fittings yesterday at the Prodrive workshop.

"Monday's primarily just acclimatising with the car and making sure they're both comfortable in the car and that they've learned the basics of the car, so to speak," Edwards said.

"So if we ask them to do something during the race, they know what we're talking about, - whether it's as simple as adjusting the rollbar, or turning some fuel pumps on, there's all those sort of things that happen inside the car.

"But primarily making sure they're comfortable in the car because 1000 kilometres is a long way."

For de Silvestro in particular, it has been a productive few days as she has had the opportunity to steer Gracie's Dunlop Series Falcon and a 'V8 Experience' Supercar at Norwell with Paul Morris.

A driver who has only contested open wheel categories, it's given the 26-year old a head start for Monday.

"Simona has already had a few laps in a V8 Supercar now and she's able to sleep on that in the next few days, think about what it was like, how she can do things differently," Edwards said.

"They are unusual cars and very different to what she has been driving, so it's that process of just educating her. But from what I've been told, she did a great job at her first day in the car."

24/09/2015
Stay In The Know
Sign up to the Virgin Australia Supercars Championship Newsletter
This website uses cookies to improve your user experience. By continuing, you will be providing your consent to our use of cookies.Ok