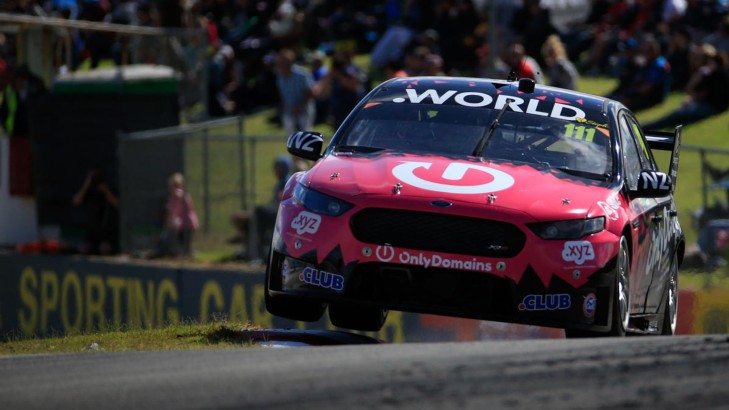 Team boss Paul Radisich believes Super Black Racing is ahead of the game, after establishing its V8 Supercars and Dunlop Series entries for the 2015 season - and seeing results.

Radisich - a respected former driver turned team principal - is pleased with the integration with the Prodrive Racing (Australia) team and driver Andre Heimgartner's progress in the category after three Championship events.

In fact, he believes the proud 'Kiwi team' is further along than what they'd initially forecast, and teased a possible surprise for end of year event Pukekohe, the only meeting on the V8 Supercars calendar staged in New Zealand.

"I think we're ahead of the game," Radisich told v8supercars.com.au when asked about progress this year and launching across both the V8 Supercars Championship and Dunlop Series for 2015.

"It was all about doing the main game this year and getting established in this - so [when] the opportunity came up with Simon [Evans] to do the Dunlop Series, we backed that as well.

Joining the Dunlop Series was a big part of the team's over-arching goal - to provide a pathway for young New Zealanders wanting to compete at the top level of motorsport.

"Super Black Racing was all about bringing on the next generation, the young, talented Kiwi kids," Radisich said.

"We have great talent down there and we need to have a step-ladder to chase and to follow. Super Black will be able to provide that for our next lot of young blokes coming through - not only the ones that are here now, but the kids in go karts and so forth - [giving them] something to really aspire to."

Heimgartner was involved in a late race incident with Scott Pye on Sunday in Perth, which hurt his Championship position - he had been up in 14th until losing out in Sunday's big points race - though the team had expected Barbagallo Raceway to be a difficult outing.

But two top 10 qualifying results in Tasmania, and a top 10 finish on Sunday at that event got 19-year old Heimgartner noticed.

Meanwhile, in two events, Evans has just been outside the top 10 in the Dunlop Series races.

With the rules this year allowing Dunlop Series teams to enter the Supercheap Auto Bathurst 1000 as wild cards when guaranteeing to run a new generation car for 2015, it would be fitting for Super Black to field another car on the grid for that race after the process went so well last year. Heimgartner - teamed with Ant Pedersen, who was confirmed as the team's co-driver recently - finished 11th and paved the way for this year's full-time entry.

"At this stage it's on the drawing board, but nothing's locked in as yet," Radisich said.

"We'll just see - for us the main goal is to establish ourselves here and get ourselves firmly entrenched in the main game, so it's not just a one year program, it will continue for years to come."

He did, however add that the team was considering "something interesting" for home round Pukekohe, to be revealed later on: "Hopefully [we'll] see a little bit more of Super Black for our own event."

The team ran a striking pink OnlyDomains.com livery for Perth, which will remain on the car for Winton.

Last year in the Dunlop Series, Heimgartner recorded top 10 finishes in both races at Winton Motor Raceway and will be hoping to find form again next week when the V8 Supercars line up at the rural Victorian circuit.