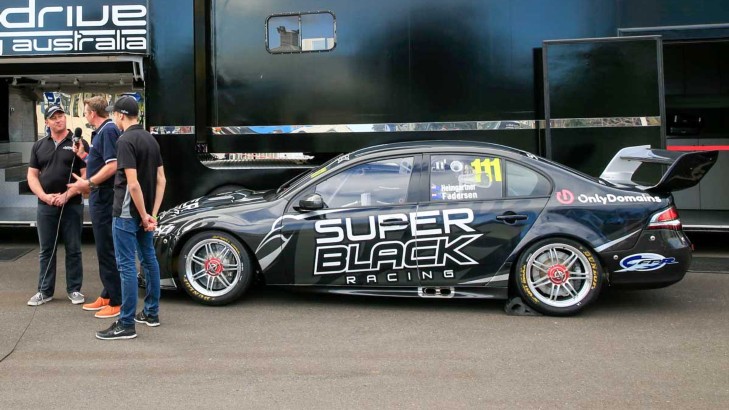 Winton Raceway will be the first hit-out for Super Black Racing tomorrow, with some of Ford Performance Racing's key personnel stepping in to assist at the pre-Bathurst test.

David Reynolds' race engineer Nathaniel Osborne will step in and run the car at Winton - with young guns Andre Heimgartner and Ant Pedersen behind the wheel - and Pepsi Max rising star Chaz Mostert will be on hand for a few laps.

The Ford Falcon FG was last raced by Mostert at the Australian Grand Prix event and functions as the team's spare. Osborne also has a connection to the FG as it was Reynolds' race car last season.

Nineteen-year old Heimgartner can't wait to get out on track and get a feel for the V8 Supercar he will take to the Mountain.

"Tomorrow is basically just running the car ... so me and Ant will just be getting comfortable in the car," he told v8supercars.com.au.

"Me personally, I'm not looking for any miracles, just going out there to learn the car, learn the team - I haven't met the whole team before, so everybody's introducing each other, learning the car and getting nice and comfortable for Bathurst."

While the crew that will manage the car at the Supercheap Auto Bathurst 1000 next month has been assembled, they will not all be present at the test day, which is why Osborne will step in as race engineer tomorrow.

Although Heimgartner runs a different spec V8 Supercar in the Dunlop Series - in which he is third in the points - he has briefly been behind the wheel of a new generation V8 Supercar before.

"I've done a few laps last year with Lucas Dumbrell Motorsport in Scott Pye's car ... then a few at the start of this year with DJR as their development driver.

"I think it will help me out a little bit, but obviously 10 or 20 laps isn't going to change anything!"

Heimgartner's position in the Dunlop Series means he will be running in both the DVS 250km race and the 1000 on Sunday at the Supercheap Auto Bathurst 1000, and jumping between the two different cars will be a new experience for him. He will have Steve Owen as a co-driver in the 250km run at Bathurst to help stay sharp.

"I've never really done anything like it before, so it will be really interesting to see how I cope with the different types of cars and jumping in and out, so I think it will be beneficial. I'll get lots and lots of laps, so hopefully that will help me out."

Proud to represent his home country as part of the Super Black kiwi-themed entry, Heimgartner knows the coming weeks are a chance to impress.

"Definitely interesting and has boosted the profile - it's a lot bigger. If I just drove for someone else, I don't think it'd get much media coverage, but because it's a New Zealand thing, it's fabulous that people have just latched onto it and really gotten into it."