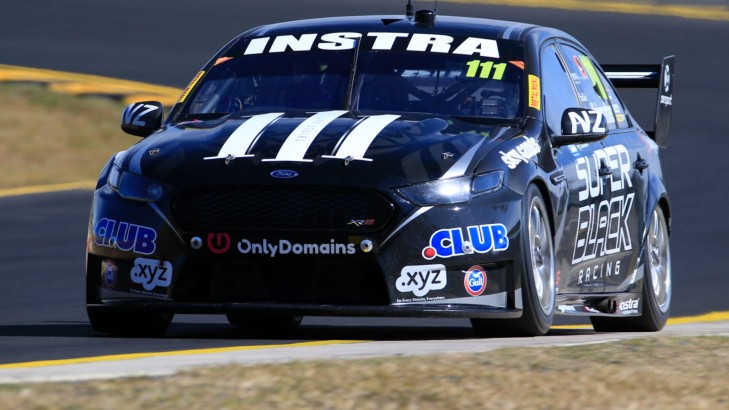 New Zealand's sole team in the V8 Supercars Championship, Super Black Racing, has confirmed it will be a definite starter on the grid for the 2016 season.

However, it has also announced that team manager and Kiwi racing hero Paul Radisich will split with the organisation, has yet to confirm its driver line-up for 2016 or which Racing Entitlements Contract (REC) will underpin its championship assault.

In its first season, SBR has campaigned a Ford Falcon FG X prepared by Prodrive Racing Australia in Melbourne, with primary driving duties carried out by young New Zealand rookie Andre Heimgartner. The team has used a REC leased from DJR Team Penske.

SBR boss Tony Lentino confirmed he will back the venture again in 2016, almost exactly 12 months on from its first outing at the 2014 Supercheap Auto Bathurst 1000.

Lentino's commitment to the New Zealand venture will continue despite finding out midway through this year that he was seriously ill with cancer.

"While I am looking to slow down and make the most of life with my wife Emily and our two young daughters, I have committed to the Super Black Racing family that they will be racing in 2016."

Super Black Racing, which is based in Wellsford north of Auckland, was established because Lentino wanted New Zealand competing as a New Zealand Team, with a New Zealand driver.

"It is important to give young Kiwi drivers an opportunity in the V8 Supercars Championship and a chance to mix it up with the big boys. The 2015 year has been a fantastic start for the team with Andre providing lots of thrills and plenty of reason to back black."

Lentino revealed the Super Black Racing Foundation would be established next year to become the funding arm of the team. It would play a key role in ensuring SBR was based on a sound business model by seeking expanded corporate support and fan memberships.

"The Super Black Racing Foundation will protect and support my vision for a New Zealand team taking on the Aussies in the V8 Supercars Championship into the future," Lentino said.

In a statement issued today, it was revealed Auckland businessman Clark Proctor and other un-named fellow motorsport enthusiasts will join with Lentino in the management of the venture, "to ensure that New Zealand will remain part of the V8 Supercars Championship well into the future".

"Clark has been an important contributor to New Zealand Motorsport over the years, both as an advocate of New Zealand drivers and teams and as a competitive driver. He will be a great asset to the team in the coming year," said Lentino.

Lentino thanked former V8 Supercars driver Radisich for his involvement with Super Black Racing and his mentoring work with Heimgartner.

"His knowledge and expertise has been invaluable to get us this far. While Paul won't be carrying on with Super Black in an official capacity, he will always be one of the people that believed in, and delivered, a Kiwi V8 Supercars team."

The team is currently finalising details of its REC with V8 Supercars and the team drivers for 2016.

Heimgartner and Ant Pedersen team up for their second tilt at the Supercheap Auto Bathurst 1000 at Mt Panorama next week.