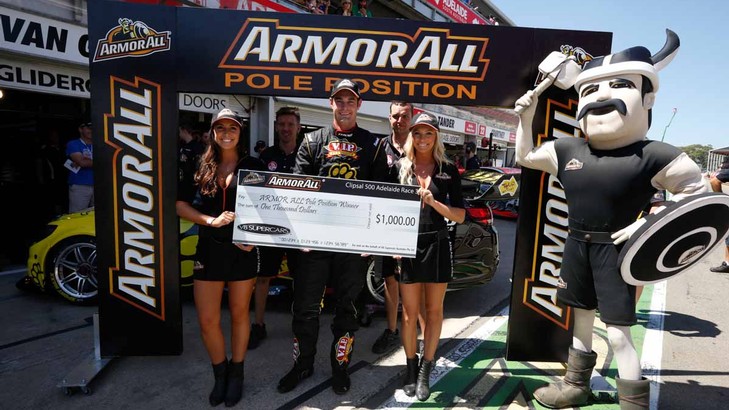 Last out on track in the ARMOR ALL Top 10 Shootout, Shane van Gisbergen will start from pole position for today’s 250km race.

“The car was awesome,” the Kiwi said, after recording his 1min20.65 lap around the tough Clipsal 500 Adelaide circuit.

“I just really worked hard on the first lap. I could see everyone struggling especially through the first lap and that chicane was critical.

"I was excited, it felt like a good lap I came onto the straight and could see the green boxes, and it was great the last one was green too!”

Van Gisbergen clinched both poles at the event last year and won on Sunday – will we see a repeat?

Garth Tander has had a return to form, starting third and alongside his former teammate Rick Kelly – a great effort for the Nissan driver.

Mark Winterbottom starts from fifth, the first Ford, with Tim Slade alongside.

Craig Lowndes made a small error at turn nine during his fast lap, delegating him to seventh, next to Jason Bright.

Lee Holdsworth was first out the box and ninth with his Erebus Merc, with Scott McLaughlin tenth with no time recorded after misusing the kerb at the first turn.

The top 10 was determined by the earlier 20-minute qualifying session, which was stopped just minutes in with rookie Robert Dahlgren’s Volvo stranded on track with a reported fuel pressure problem.

There was contact in pitlane with Dale Wood into the back of Winterbottom’s Ford Pepsi Max Falcon – though Frosty admitted that wasn’t the reason he fell 0.4sec short in the session. Wood was straight into the FPR garage apologising once the session had been run.

Others to note include Chaz Mostert 11, James Courtney 15, Fabian Coulthard 16, Will Davison 17, David Wall the first of the DJR cars in 18, David Reynolds 22, and Russell Ingall 24.

Shane van Gisbergen  ›
15' Team Darrell Lea STIX ›
2014 Clipsal 500 Adelaide  ›
Stay In The Know
Sign up to the Virgin Australia Supercars Championship Newsletter
We use cookies to ensure that we give you the best experience on our website. If you continue to use this site we will assume that you are happy with it.Ok