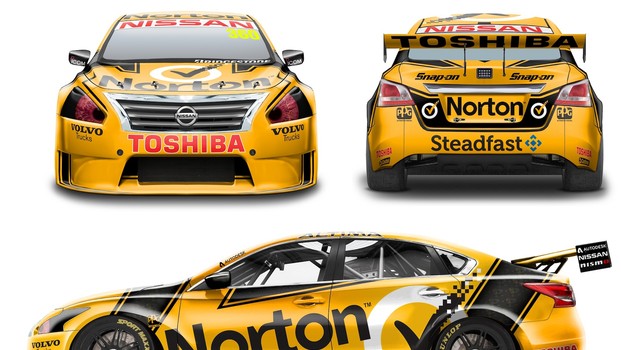 Renamed the ‘Norton Hornets’ for thisevent only, the Nissan Altima squad of James Moffat and Michael Caruso willalso debut a new Hornet-themed livery to run for the rest of the season.

While every bodywork component on the carsis usually stickered, this livery change – a request from Norton – willsee the panels painted, so the cars stand out with an even brighter piercingyellow.

Team manager for the Norton cars RobPalermo spoke to v8supercars.com.au about the transformation into the ‘Hornets’for next weekend’s event.

Palermo described the process as being similar to peeling a banana.

Because the cars had to be painted for thenew livery, the old the prints had to be removed and the panels rubbed back tobe prepped for the paintwork.

And it doesn’t stop with the paneling on thetwo cars – spare bodywork had to be completed in case replacement panelsare required over the race days. That, according to Palermo, includes four setsof bonnets, two sets of boot lids, four sets of side skirts and three sets ofdoors.

Fortunately the team is now in a positionwhere it has spare paneling – the cars weren’t involved in too muchcarnage this season, though James Moffat had plenty of damage after the pile-upat the last event in Darwin.

As Nissan Motorsport operates four cars –the two ‘Norton Hornets’ as well as the Jack Daniel’s racers steered by theKelly brothers – post-race repairs from the previous event have to beundertaken in addition to the work required to turn around the new livery.

“It takes a lot and it’s been a shortturnaround – but we’ve been able to do it,” Palermo said.

There havebeen three guys at work in the paint shop to prep the bodywork.

While it istime consuming to paint the cars, Palermo agreed they looked better. Andpainting means achieving the exact shade of yellow Norton is looking for.

“They aredefinitely a brighter yellow – they’ll stand out even more,” he said.“They were one of the most eye-catching cars before and now they’re evenbrighter!”

Designing anew livery can take several weeks from initial conception to final sign off, asboth the team and sponsor have needs to meet.

In this case,key changes in addition to the colour include an increase in size in the Nortonsignage on the side of the car, small hornets on the rear quarterpanel of the cars and eyes on the lights.

“It’sdefinitely not a five-minute job,” Palermo said. “The signwriting departmentgets involved and we are ‘to and froing’ with the sponsors to make sure they’rehappy.”

Racefans were the ones to give the cars the tag ‘Norton Hornets’ and the security softwaregiant has responded by creating a Hornet Internet safety super hero character,which will make its first ever appearance at Townsville’s V8 Supercar eventnext weekend, alongside the one-off livery.

Almost5000 yellow Norton antenna headbands will be given away over the race weekend.

Seethe Sucrogen Townsville 400 event page for more information; visit Ticketekfor tickets to the V8 Supercars; or click here to download V8 SuperView, the live and uninterrupted streaming exclusively showing Practice Three and Four over the weekend, as well as qualifying sessions and the races.

Michael Caruso  ›
15' Nissan Motorsport ›
2013 Sucrogen Townsville 400  ›
Stay In The Know
Sign up to the Virgin Australia Supercars Championship Newsletter
We use cookies to ensure that we give you the best experience on our website. If you continue to use this site we will assume that you are happy with it.Ok