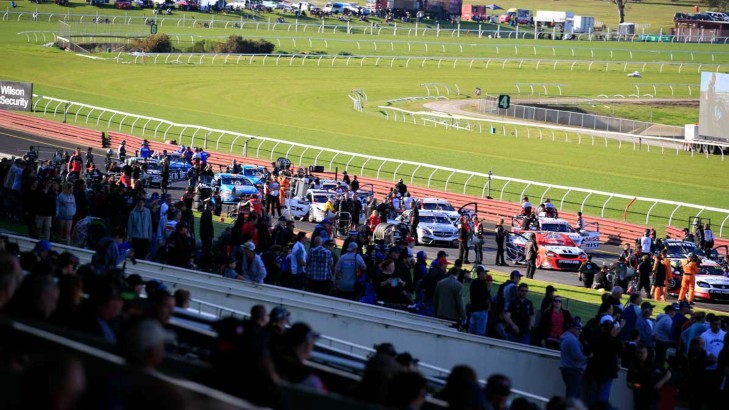 It's the first race of the PIRTEK Enduro Cup today at the Wilson Security Sandown 500, and with premium points on the line, it's set to be action-packed.

After yesterday's intense qualifying races, teams will have one last chance to tune their cars ahead of today's 500 kilometre endurance classic in a 20-minute warm-up session at 10.20am.

Then, strap yourself in for the first endurance race of the season: 161-laps around Melbourne's most historic race circuit, kicking off at 1.25pm.

But before the V8 Supercars drivers head out to battle, wish them good luck during the official V8 Supercars Autograph Session. From 8.50am, each driver will appear at the back of their team transporter for half an hour, signing posters and taking photos with fans.

While you're there, check out all the behind the scenes action from inside the V8 Supercars paddock with your Paddock Pass. See the impressive purpose built transporters and watch the teams work on their cars, trying to make them go faster.

Be impressed when the Hot Wheels Stunt Team, Showtime FMX and the Aussie Bandit Ute perform their exhilarating shows during the entertainment sessions today, and be thrilled when Joel Haski showcases his intense aerial displays in the Red Bull Stunt Plane above the track. It's neck-numbing stuff.

Car lovers will be in paradise down at the Auto Show. An impressive line-up of award-winning collector cars, muscle cars, drag cars and more will be on showcase - it's paradise for any rev-head.

Keep the little race fans busy at the Disney Zone, where they can put their racing skills to the test at the new Cars Ice Racers ice rink and catch up with Lightning McQueen from Cars.

They can even try their hand at bike racing at the Motorcycling Australia set-up. Open to kids aged four to nine, the youngsters can test their skills for free on one of the mini bikes in a controlled environment, with experienced coaches and riders on hand to help them hone in on their skills. It could be the start of an exciting career.

With kids 12 and under receiving free trackside admission, the Wilson Security Sandown 500 is the ultimate family outing.