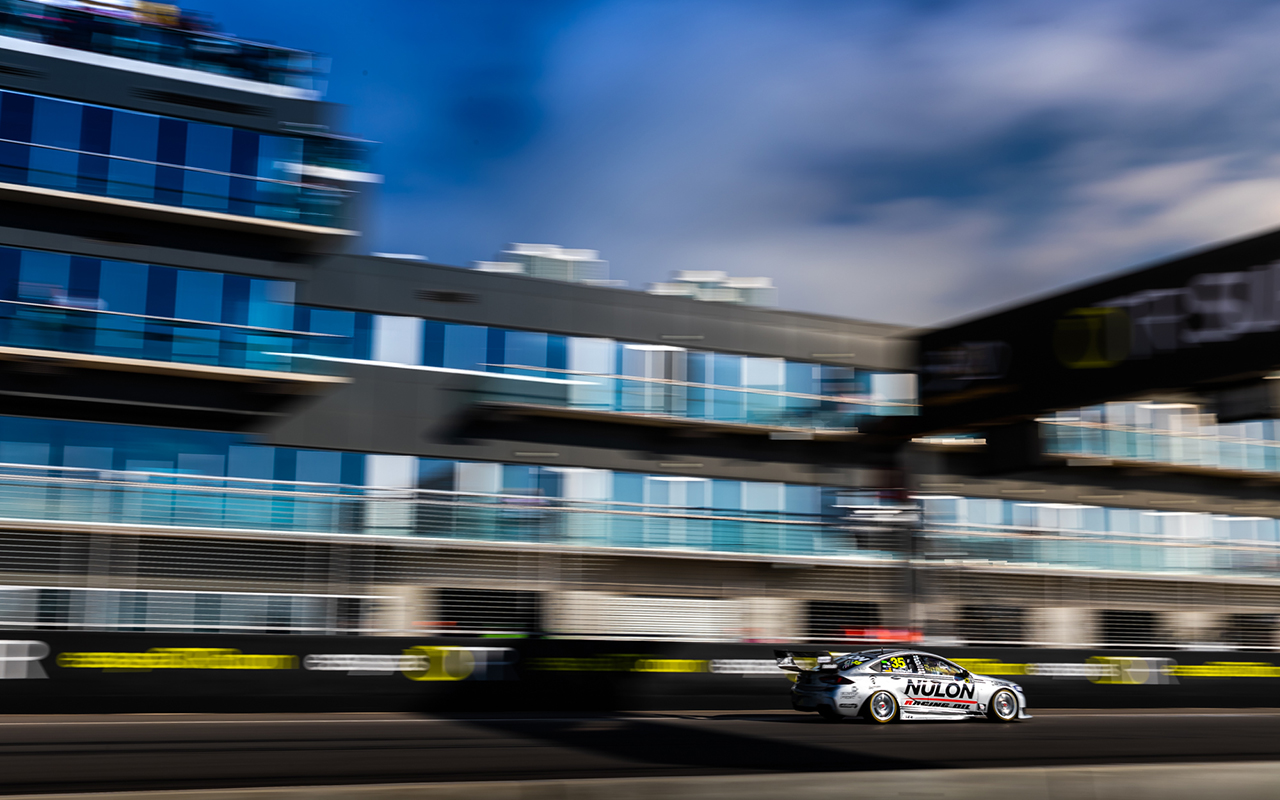 Matt Stone Racing has been handed a fine and points penalty for a pitstop infringement in Sunday’s leg of the OTR SuperSprint, following an extensive post-race hearing.

The team has been docked $3,000 and 30 teams’ championship points after the car’s brake lock mechanism disengaged during a pitstop.

Operation of the brake lock mechanism was mandated this year to prevent rear wheelspin during pitstops, which presents a safety hazard for mechanics.

While $3,000 and 30 teams’ championship points is the standard penalty for a brake lock mechanism infringement, Deputy Race Director David Stuart sought a harsher penalty for MSR due to the nature of Sunday’s case.

Rather than a minor movement, the rear wheels rotated approximately four times, which Stuart argued presented "a risk that the hand of a team member could be caught in the rotating spokes”.

However, stewards opted to apply the regular penalty, having heard evidence that Hazelwood held his foot on the brake until after the wheel changes were complete, and immediately re-applied the foot brake once informed on team radio the wheels were spinning.

See the stewards’ full decision report at the bottom of this story.

Hazelwood finished 14th in Sunday’s race, making strong ground from a lowly 22nd on the grid.

The South Australian had started 20th on Saturday, before being an innocent victim of carnage at Turn 6 that took him out of the race.

“We came here feeling quietly confident, but to be honest we just got caught out at the start of the weekend,” he said following the Sunday encounter.

“We had to change our set-up halfway through the weekend and obviously losing out [Saturday] we had no data to work off and started blind again [Sunday].

“It was a little bit frustrating, but that's the way it goes.”

During Race 22, the DRD, the DSA and the Stewards noted from broadcast footage that the rear left wheel of the Car #35, Todd Hazelwood, appeared to rotate multiple times shortly before Car #35 was lowered to the ground during a pitstop. A subsequent review of Hawkeye footage of the incident confirmed this suspicion.

Supercars telemetry data from Car #35 revealed that the line locker on Car #35 had been engaged at the commencement of the pitstop but disengaged approximately mid-way through the pitstop.

The incident therefore appeared to be similar to incidents that have now occurred on a number of occasions during the 2019 Championship season when a voltage drop at low engine revolutions causes the ECU to disengage the electronically controlled line locker on the rear wheels.

In each of these instances, the Stewards have consistently imposed a penalty on the Team concerned by way of a Fine in the sum of $3,000 and the loss of 30 Teams Championship Points.

The DRD concluded that there was clear evidence of a breach of Rule D11.8.8 as amended by Article 5.13.2 of the Supplementary Regulations for the Event.

Given that there have been multiple instances of electronic line locker failures during the 2019 Championship, the Stewards determined to summon the Authorised Representative of Matt Stone Racing and the Driver of Car #35.

At 16.45hrs on 25 August 2019 the Stewards commenced a hearing. The DRD presented Hawkeye footage of Car #35’s pitstop during Race 22 and Supercars telemetry data from that pitstop.

The Authorised Representative of Matt Stone Racing, Mr Wes McDougall, conceded that the rear wheels of Car #35 rotated approximately four full revolutions shortly before Car #35 was returned to the ground at the end of the pitstop.

He also acknowledged the accuracy of the telemetry data presented which showed that the line locker had disengaged part-way through Car# 35’s pitstop. It was also conceded that the HoM had not granted approval for the rear wheels to rotate.

The DRD submitted that this incident is to be distinguished from earlier incidents involving line locker failures for reason that the rear wheels on Car #35 rotated multiple times presenting a risk that the hand of a Team member could be caught in the rotating spokes of the rear wheels.

He submitted that a more severe penalty ought to be imposed on Matt Stone Racing for that reason and recommended an increased Teams Championship Points Penalty in addition to a Fine.

Prior to the 2019 Championship, Rule D11.8.8 provided that ...from the time a Car leaves the ground until the Car has returned to the ground, it is not permitted to have the clutch engaged so as to cause the rear wheels to rotate unless prior approval is given by the HoM”.

Under that former Rule, the Driver of the car had a degree of responsibility and/or control over rear wheel rotation by the operation of the clutch. It was for this reason that the Penalty consistently applied for a clear breach of old Rule D11.8.8 was a Pit Lane drive through Penalty.

However, as noted above, Rule 11.8.8 was amended after the 2019 Manual was published. The Supplementary Regulations for each Event in the 2019 Championship have deleted Rule D11.8.8 as published in the Manual and replaced it with a Rule as follows: “... from the time the Car leaves the ground until the time the Car has returned to the ground, the brake lock mechanism must be engaged so as the rear wheels do not rotate without the prior approval of HoM.”

The DRD explained that before the first event in the 2019 Championship, every Team conferred with the HoM regarding the design of a brake lock system to comply with this amended Rule.

It was suggested that there remains a responsibility on the Team and the Driver to ensure that the rear wheels do not rotate.

Mr McDougall and the Driver of Car #35 explained what occurred in this case.

They told the Stewards that the brake lock mechanism in Car #35 is activated by the Driver by a dedicated switch on the steering wheel.

The Driver activated that switch at the commencement of the pitstop.

The Driver explained that last year his procedure was to stop in his pit-bay, activate a line locker on the front wheels, put the car in neutral and hold his foot on the foot brake.

However, this season since the rear wheel line locker system has been introduced, his practice is to leave the Car in gear with the clutch disengaged because unless the dogs in the transaxle are perfectly aligned, it may not possible to select first gear at the end of the pitstop with the line locker activated.

He explained that, in addition to activating the electronic line locker, he always keeps his foot on the foot brake while Team personnel are changing wheels during a pitstop.

The Supercars telemetry data from Car #35 for the pitstop during Race 22 confirmed that there was considerable foot brake pressure for some time during the Pit stop.

The Driver of Car #35 also explained that during this Pit stop his engineer was on the Pit wall observing and communicating with him by radio and that it was only after the engineer told him “Wheels are done, now waiting on fuel” that he released the foot brake in the knowledge that the personnel changing wheels were clear of the car.

The DRD acknowledged that the Supercars’ telemetry was consistent with this explanation.

The Stewards were also told, and the telemetry confirmed, that as soon as the engineer noticed the rear wheels rotating at the end of the pitstop, he notified the driver of Car #35 who immediately applied the foot brake.

The telemetry from Car #35 also revealed that at the time the rear wheels were rotating the throttle percentage was only in the order of 3% and that the Driver did not apply more throttle until after the Car had been lowered to the ground.

The Authorised Representative could not explain why the line locker disengaged half-way through the pitstop.

It is clear from the Supercars telemetry that it was not disengaged by the Driver of Car 35. The Authorised Representative explained that the logic in the ECU to control the brake lock mechanism is complex. However, it is a system which Supercars Technical have mandated be used by the Teams.

The Authorised Representative conceded that because the line locker had disengaged Article 5.13.2 of the Supplementary Regulations had been breached.

He conceded that a Penalty was warranted but submitted that it should be the same Penalty that has been applied for the same breach consistently this season.

Taking all of the evidence and explanations into account, we have determined not to apply any greater Penalty in this case.

Our view might have been different had this Team committed the same breach previously this season.

It may also have been different had the Driver not employed, on his own initiative, a fallback procedure of keeping his foot on the foot brake at least while the wheel changing operation was occurring.

Plainly, the risk of a Team member being injured by a rotating wheel is most acute during the wheel changing process.

We have also determined that it would not be appropriate to impose any Penalty on the Driver of Car #35. Car #35 obtained no sporting advantage from the rear wheels rotating in this case.

Further, we note that the old Rule which imposed some responsibility on the Driver to avoid rear wheel rotation via clutch disengagement has been rescinded and replaced by a Rule which only mandates the engagement of a line locker.

The Driver of Car #35 explained that after activating the line locker via the switch on his steering wheel, he believed that the line locker was and remained engaged at all times until his engineer told him that the rear wheels were rotating. He immediately re-applied the foot brake.