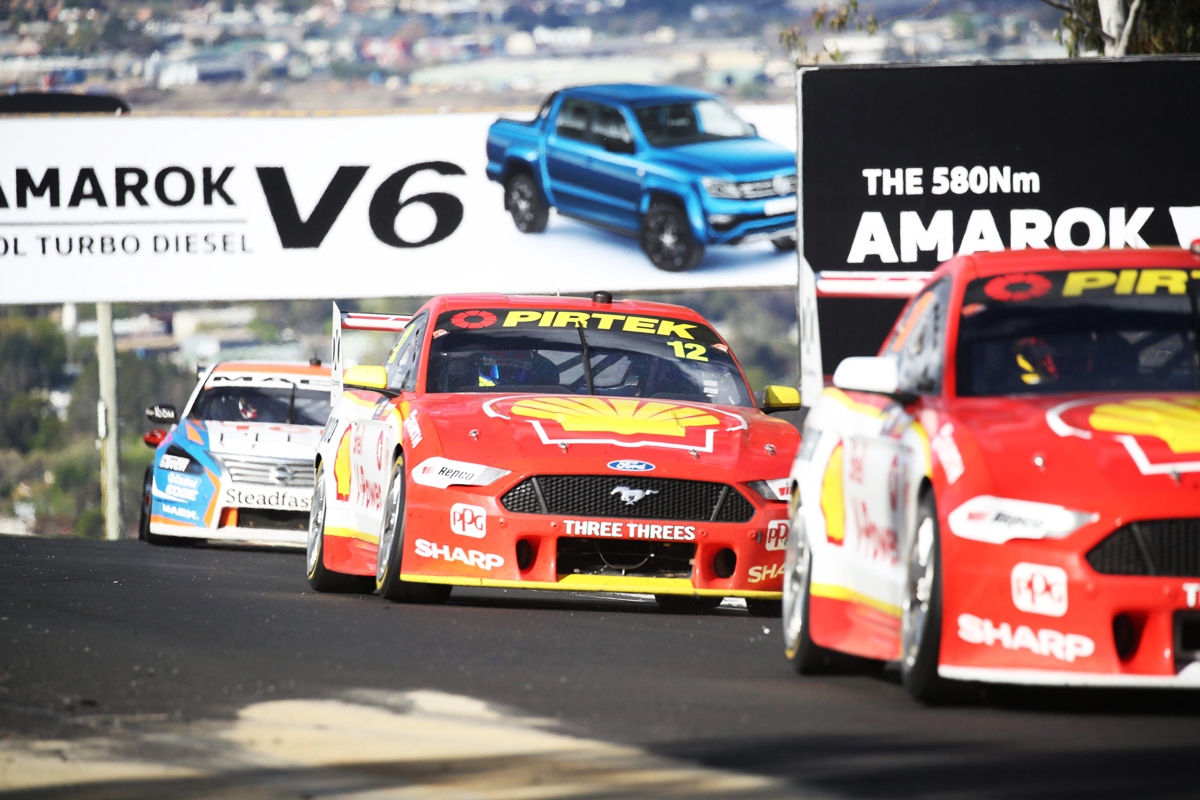 The charge was laid following an inquiry at the circuit that lasted more than two hours and will result in a stewards hearing prior to the Gold Coast 600, with the Bathurst result remaining provisional.

Fabian Coulthard had been given a drive-through penalty for driving excessively slowly during a Safety Car period at a critical time in Sunday’s race, holding up the pack behind.

The gap between third-placed Coulthard and the car ahead, teammate and eventual winner Scott McLaughlin, increased from one to 47 seconds from Turn 6, when the yellow flags were first visible, to the end of the lap.

With those behind not allowed to overtake under the yellow flags, Coulthard’s actions resulted in McLaughlin and race leader Jamie Whincup pitting and returning to the track comfortably ahead of the field.

According to the bulletin, stewards elected to launch an inquiry into a potential team orders breach due to a subsequent television interview by team boss Ryan Story and the “extraordinary increase in the gap between Cars #17 and #12 during the SC deployment”.

During the interview, Story was asked if having Coulthard slow was “a bit of a plan”, to which he replied: “I wouldn’t go so far as that.

“We were genuinely having overheating issues with the car and where it was worse was under Safety Car when you’re not getting a lot of air going through the car.”

The rule in question, D24.1, states that “Team Orders 24.1.1 Means an instruction to a Driver or Team member, either verbal or otherwise the effect of which may interfere with a race result."

Having been informed of the charge, Story requested the chance to build a case to defend his team’s actions; that defence to come at the Gold Coast hearing.

After finishing sixth, Coulthard moved to clear his name on Sunday night, telling Supercars.com he had simply adhered to an engineering directive to "take extreme caution, the engine is hot".

The full stewards explanation is published below:

After the Race the Stewards determined to conduct an inquiry into the incident on Laps 134-135 during the Safety Car deployment when the gap between Cars #17 and #12 increased significantly to the disadvantage of all Cars behind Car #12 because they were concerned that the incident may have been the result of Racing Team (Aust) Pty Ltd having issued an instruction to the Driver of Car #12 to slow and create an unwarranted large gap between Cars #17 and Car #12 for tactical reasons.

Rule D24.1 prohibits Team Orders and provides that an instruction to a Driver or Team member, either verbal or otherwise the effect of which may interfere with a race result is a Team Order.

After the Race Director announced the Pit Lane drive through Penalty on Car #12, the Stewards noted on broadcast footage an interview by a Supercars Media commentator of the Authorised Representative of Racing Team (Aust) Pty Ltd, Mr Story, during which Mr Story was invited to explain the reason why the gap between Cars #17 and #12 had been so large and whether it was the result of a ‘plan’.

While denying that suggestion, the response of Mr Story and the extraordinary increase in the gap between Cars #17 and #12 during the SC deployment caused the Stewards to hold concerns that Rule D24.1 may have been breached.

Following the Race the Stewards summonsed the Authorised Representative of Racing Team (Aust) Pty Ltd, the Driver of Car #12 and Car #12’s engineer to a Hearing and requested that the DRD obtain a recording of the radio communications between Car #12 and Car #12’s engineer during the SC deployment. That Hearing commenced at 2000hrs on Sunday 13 October.

After interviewing Mr Story, the Driver of Car #12 and Car #12’s engineer, and reviewing Hawk Eye footage of the incident, including in-Car footage from Car #12, the interview of Mr Story and Supercars telemetry data for Car #12, the Stewards, while making no findings, determined that the evidence was sufficient to call upon Racing Team (Aust) Pty Ltd to answer whether it breached Rule D24.1 and recommended to the DRD that he consider laying a charge of a breach of that Rule.

The DRD having determined to lay such a charge, and the Authorised Representative of Racing Team (Aust) Pty Ltd having explained that he required an opportunity gather and present evidence in defence of that charge and the DRD having sought an opportunity to secure further evidence, the Stewards closed the Inquiry at 2210hrs.

The charge will be heard by a panel of Stewards prior to the commencement of track activities at the forthcoming Gold Coast 600. In the circumstances, the Classifications for Race 25 remain Provisional.

The Stewards re-iterate that no findings have been made against Racing Team (Aust) Pty Ltd at this stage and the Driver of Car #12 is not accused of any breach of the Rules beyond the breach of Rule D10.2.2.3 for which a Pit Lane drive through Penalty was issued during the Race and was served.