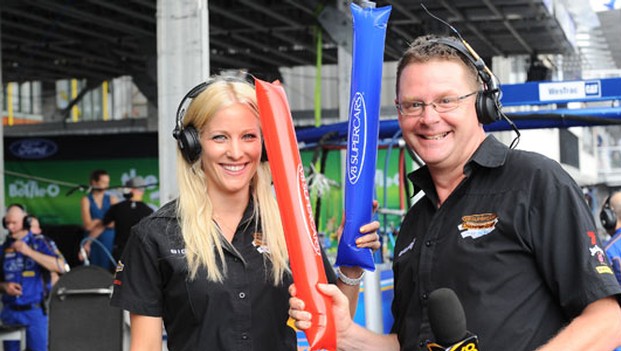 RIANA Crehan went from knowing very little about motorsport, to becoming a crucial member of V8 Supercars Big Screen production on race weekends. BigPond Sport caught up with the former model to discuss her journey, how she got into the sport and the challenges of being taken seriously….

What is your role on race weekends?

My main role is hosting the big screen production at the circuit, keeping everybody in the loop. I also go out and do colour pieces around the track, bringing the event to the big screen.

People who haven’t been to a V8 Supercars event before don’t realise how much happens behind the scenes and around the track, so it’s great to showcase the family entertainment as well.

I also get to have a chat with our drivers - interview them about what’s happening on the track, or in life in general. It’s a great way for people to get to know the drivers’ personalities. It’s great fun because we always have some great characters in the series.

During the actual races I am pit reporting for our big screen coverage. Although our commentary team is really fantastic, sometimes it’s difficult for them to follow some of the action in pit lane or around the track. I’m able to convey some of that information to our viewers and listeners so they know what’s happening.

How did you get involved in motorsport?

Initially when I first worked for V8 Supercars, I won the Miss V8 Supercar competition in 2005 and I was introduced to the sport in 2006, travelling with the sport.

I hadn’t grown up in a motorsport family, hadn’t watched Bathurst, but the more I worked and got to know the sport and people involved I started to love it and worked really hard at my research.

I went from knowing nothing at all about the sport except they have cars with four wheels, to being able to tell the tale of strategies happening in a race and things happening with the car.

Hard work has allowed me to appreciate it more and I’ve grown to love it. Being involved in Will’s (Davison) life, I can’t really avoid it. (Riana is Will Davison’s long-term girlfriend).

What are the challenges of the role?

I suppose in the beginning it was a very big challenge for me because I was a 19 year old blonde haired former model, so it was a challenge to get an opportunity and be taken seriously.

It’s been a bit of a challenge over the years to be valued and respected in the role that I do – working hard and knowing the sport. I think I’ve proven that I deserve the role and I know what I’m talking about most of the time. I don’t know everything, but a lot of our fans are female, so I think offering an opinion and a different point of view has been important for our team.

What do you enjoy most about working on the V8 Supercars big screen production?

I love travelling to places I wouldn’t normally go to. I love being part of a fantastic team. It’s also great that I can be at events while Will is racing.

The job itself offers great challenges. I don’t think many people understand how much of what we do is off the cuff. But when it all works out well, it gives us great satisfaction.

I love being part of the sport, being involved with the fans and having fun with the teams and drivers who are all a great bunch of guys.

How important has the big screen coverage become to fans on race-days?

I think it’s hugely, hugely important. I’ve been working with the big screen production since 2007 and the production has really grown. At our big marquee events it is certainly a key aspect of what the fans come to enjoy.

If we didn’t have our big screens I don’t think it would be anywhere near as enjoyable for the fans. I think it’s vital for our viewers at the track to see and hear our big screen coverage - not only for the information side, but the entertainment value as well.

It is a massive production. We are on air from first thing in the morning until last thing at night and sometimes the fans really get involved.

My co-host Minty (Glenn Mintern) and I created a bit of a running joke where we like to do a Mexican wave along the front straight. In Adelaide and Townsville, the Mexican wave got the whole crowd involved, it was fun.

What do you do when you’re not working on race weekends?

I’m a registered nurse - working at Monash Medical Centre hospital (Melbourne), and when I’m not doing that I’m at home, enjoying exercising and keeping fit, going to the beach and walking the dogs!

12/12/2012
Stay In The Know
Sign up to the Virgin Australia Supercars Championship Newsletter
We use cookies to ensure that we give you the best experience on our website. If you continue to use this site we will assume that you are happy with it.Ok