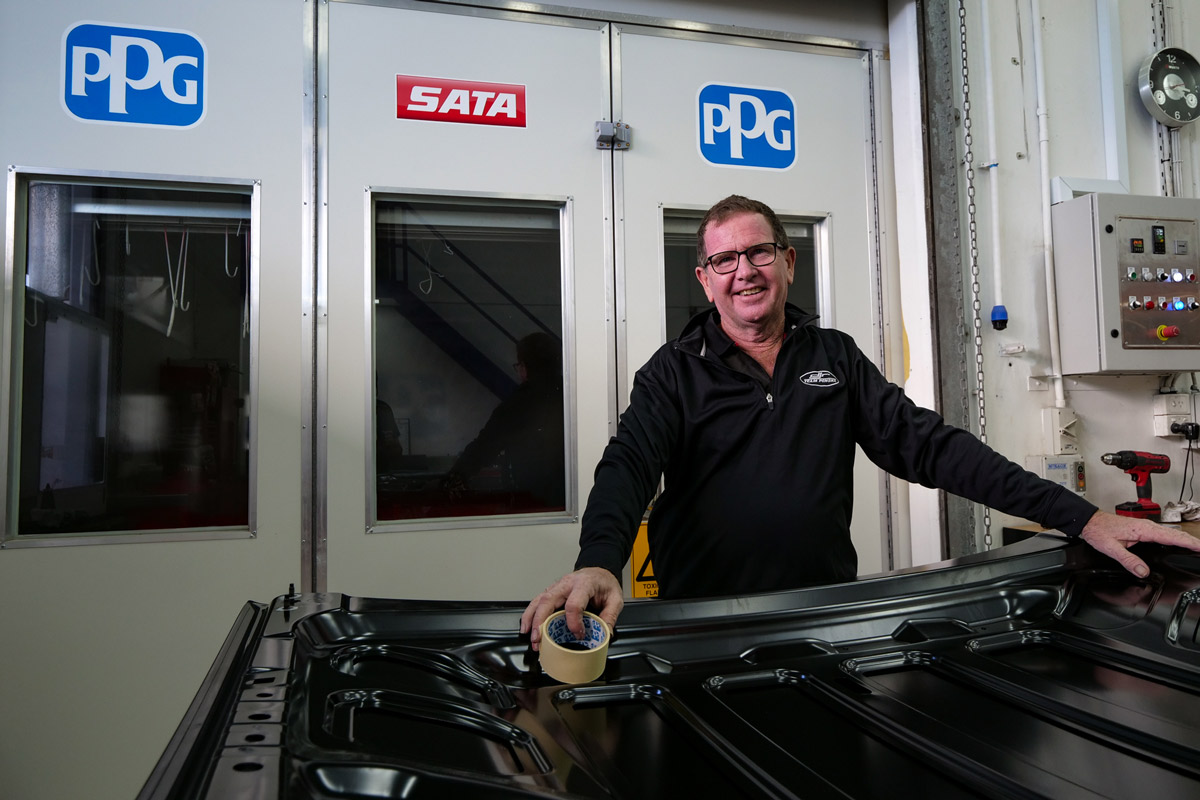 Through Dick Johnson Racing’s 40-year history, there has predominantly been two men who have ridden the highs and lows.

One, of course, is the icon himself, Dick Johnson.

The other isn’t quite so well known in the public sphere: Keith Chesterton.

Now 62, Chesterton works as DJR Team Penske’s painter. It’s the best part of 35 years on from when he joined the Ford team as a panel beater.

Throughout, he has seen the squad complete a full circle, from achieving the 1989 championship/Bathurst double to being on the brink of collapse in the early 2010s to perhaps now being more of a powerhouse than ever following the Penske buy-in.

For Chesterton, this whole motorsport thing began in true Aussie fashion: a visit to the Mountain.

“Being in Sydney, a friend of mine’s dad was a track photographer and we used to go – my first time at Bathurst was 1974 when [John] Goss and [Kevin] Bartlett won,” he tells Supercars.com.

That would be the start of a four-decade run where he more or less would make the trip for every annual Great Race, be it as a spectator or crew member.

Upon finishing his panel beating apprenticeship, Chesterton began working for Colin Bond with the Ford rally team in 1979.

Eventually, a desire grew to move up from Sydney to link up with DJR.

“I knew him through rallying and we were talking; I said, ‘when the Sierras come online I’d love to work on those’.

“I went to the Adelaide Grand Prix in ’86 with Bondy and then Dennis just said, ‘Dick wants to talk to you’.

“I went and had a chat with him and he said ‘when do you want to come up?’ And that was it.

“When I started, as I said I moved up, being a New South Welshman that caused me a fair bit of grief and still does!

“I’m a Manly boy born and bred. They can’t get that out of me! They have tried..” 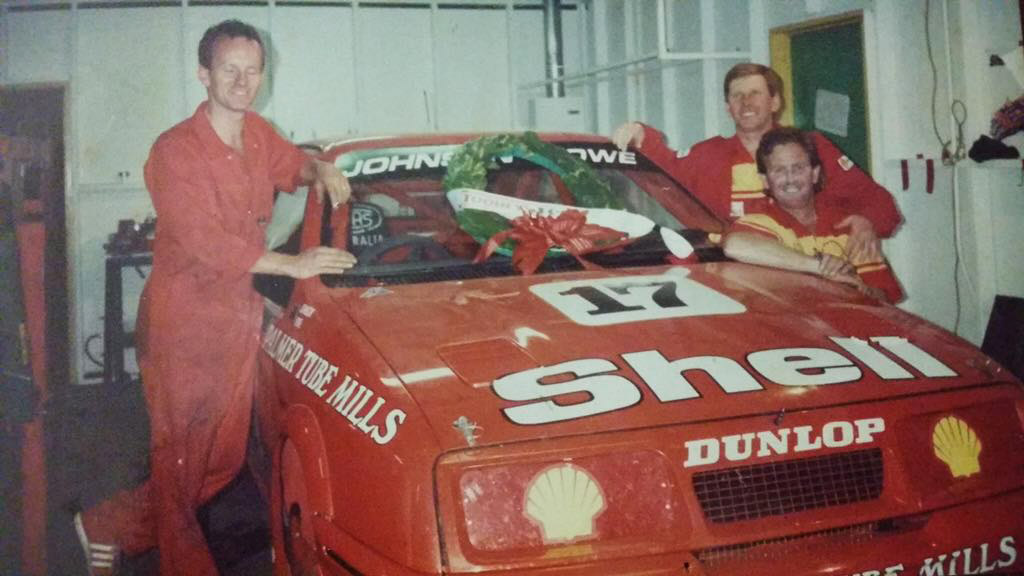 The DJR he worked for then was a far cry from the big business they now are.

“When I started there was five of us,” Chesterton recalls.

“We used to go three up in a truck – the workshop shut down when the team went away – and Gregg Hansford was the other driver, I ended up with a really strong friendship with him.

“That first year was very hard but ’88 we started turning things around and ’89, the first Bathurst win, it still sticks in my memory.”

Johnson and John Bowe would conquer the Mountain again in 1994 but the team would have to wait another 25 years before repeating that feat, accomplished by Scott McLaughlin and Alex Premat last October.

“I kept saying, wait until you win Bathurst. There is nothing that equals it,” he says.

“Because I don’t travel anymore, I actually went down [last year] and I took my son down and we were there for the Sunday in the pits and he couldn’t believe the stress going on.

“I said ‘mate, and this race is going to plan – you wait until you hear on the radio that the car is smouldering in pitlane!’

“So that was really good for me, he got to see why I used to get pumped up about the races and everything.” 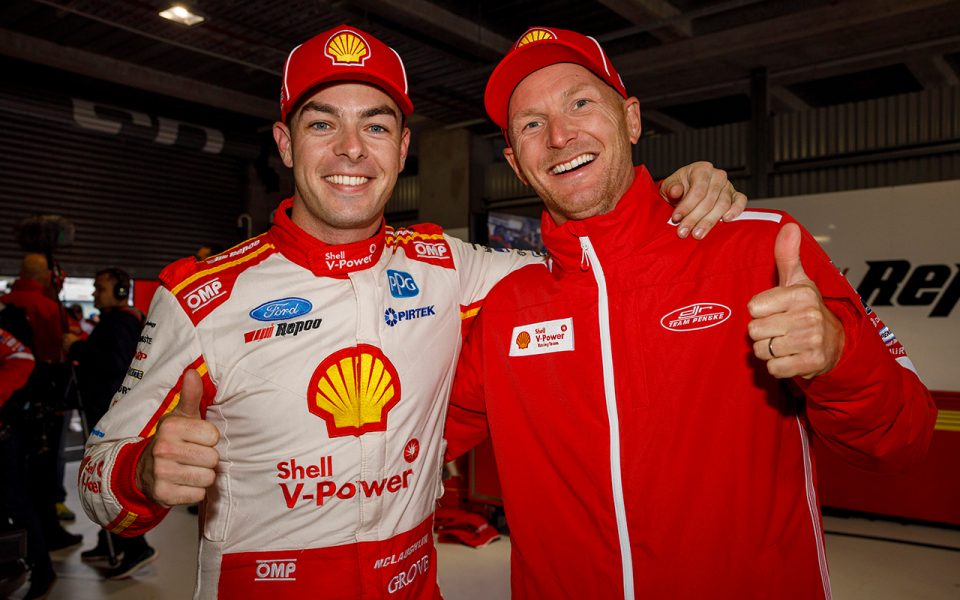 But the recent ups of Bathurst and championship success only came about after surviving basically rock bottom in the not too distant past.

“After we won the championship in 2010, we really struggled,” says Chesterton.

“Ryan Story, he was a big saviour here. He went from being a teammate to co-owning the team.

“His input was a big help to us, which has put us to where we are today.

“There was a lot of nervous times and I still remember when we went to Adelaide and Ryan said, ‘we have got sponsors for this meeting but we don’t know about the others’.

“We were doing race-to-race, which was very hard to do, but you just had to keep having the belief that we’ll get through this, we’ve done it before.

“But that was very worrying times and especially for Dick, you could see it in him, it took a toll on him big time.”

A quick sidenote on Johnson, who he has worked alongside all this time: “We’ve never had a drama, there has never been a heated word with him.”

Roger Penske’s move to join forces with Johnson gave the team a welcome influx of resources and soon enough their Stapylton workshop was state of the art. By 2017, the team was a championship contender once more.

Chesterton makes no secret of his love of the sport, which has kept him involved so long.

“A lot of people dream about it but we get to do this,” he says.

“I always remember I was in Wanneroo once, watching the Sierras going around, that’s when you used to start practice on Wednesdays; it was a beautiful day and I was sitting there watching the car go around and I thought this is a pretty good job.

“Here I am watching what I do paint-wise go around this circuit – I could quite easily be at a panel shop fixing rust repairs or something.

“It’s great, and we ride the highs and lows with the drivers.

“I’m 62 now, I still get a buzz out of these cars, working on them, and all the young guys around, it helps you stay young.”

But in an industry where change, for many, is just a matter of time… why DJR all this time?

“Well, we used to pride ourselves on we had a core team here for years. None of the guys left, they stayed here,” he says.

“If they left, they went overseas to further their careers. I tried to go to Europe in the Nissan rally team but that didn’t eventuate so I stayed here.

“It’s like a family. I’ve stayed loyal to Dick.

“This is where I live, I like living in Queensland, and I just like working for him.”