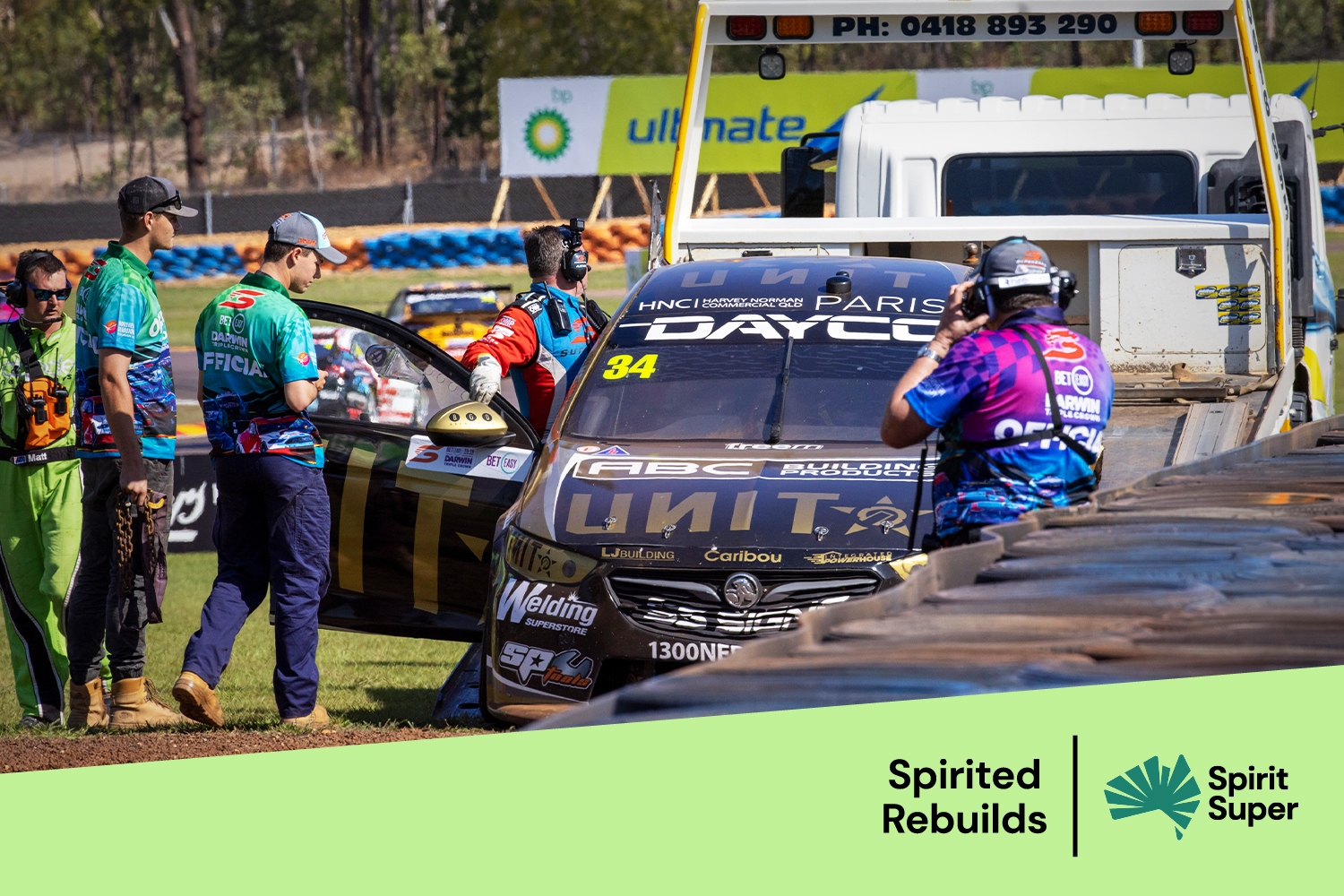 This is the second of Supercars.com’s Spirited Rebuild series brought to you by Spirit Super. In this edition, we cover Matt Stone Racing’s valiant effort to repair Jake Kostecki’s car after his Darwin crash.

It’s hard enough to repair a car after it finds the wall, but when it’s not your fault, it makes a rebuild seem even more desperate.

That was the case for Matt Stone Racing at Hidden Valley last year after Jake Kostecki was an innocent bystander in a three-car incident.

Contact between Jack Le Brocq and Rick Kelly saw both cars interlock and spear across the infield.

They emerged in the path of an unsuspecting Kostecki, who was turned into a high-speed spin and fired into the tyre barriers.

Such was the impact, that the rear wing parted company with the car and was perched on the barrier.

Kostecki was out on the spot and the Safety Car was deployed.

The damaged car, sans rear wing, was recovered and returned to the MSR garage, where the team assessed the damage.

One challenge for MSR was ensuring the car met the stringent aerodynamic guidelines once repaired, having been rebuilt from the firewall back to the rear of the car.

“We worked a fair portion of the night to fix the car,” team owner Matt Stone told Supercars.com.

“We stripped it down and assessed how far back the damage went before we could replace damaged parts with new ones.

“Once that’s done, and the car’s stickered up and ready to go, we put it on the set-up pad and made sure everything was straight and true. 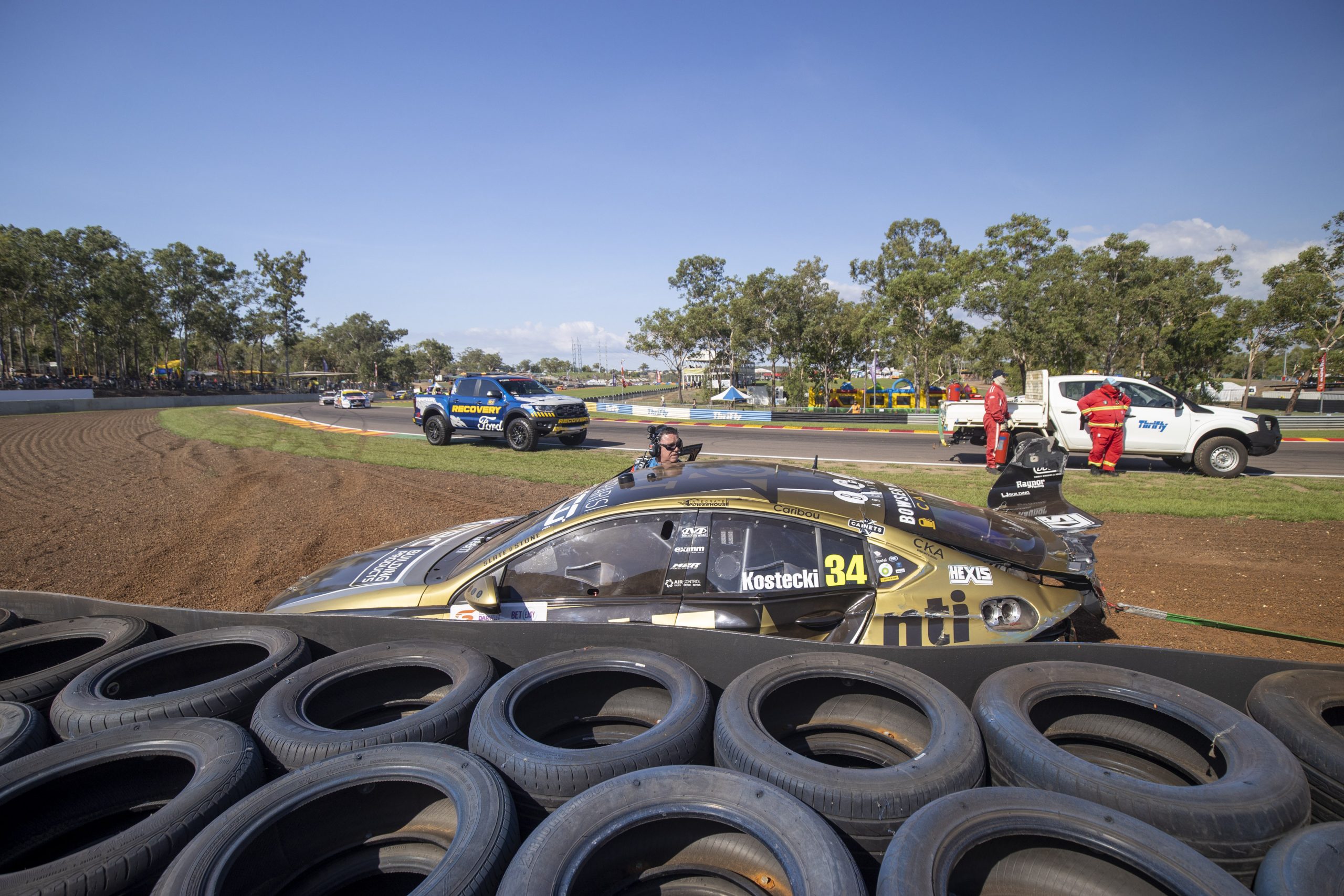 “Being the rear-end and rear wing, you’ve got to make sure it’s all in the right spot for the aerodynamics.

“Once you get the car bolted back together, you’ve got to make sure everything’s in the correct settings.”

A rebuild begins with an assessment of the chassis. While it was largely cosmetic, significant repairs were required.

Stone has been around long enough to know what a car-killing accident looks like, and was confident his crew could get the job done ahead of the following day’s action.

“You become pretty accustomed to seeing crashes, so you have to go to the big-ticket items,” Stone explained.

“The chassis and roll-cage is the first thing you should look at, to give you an idea if it’s repairable. 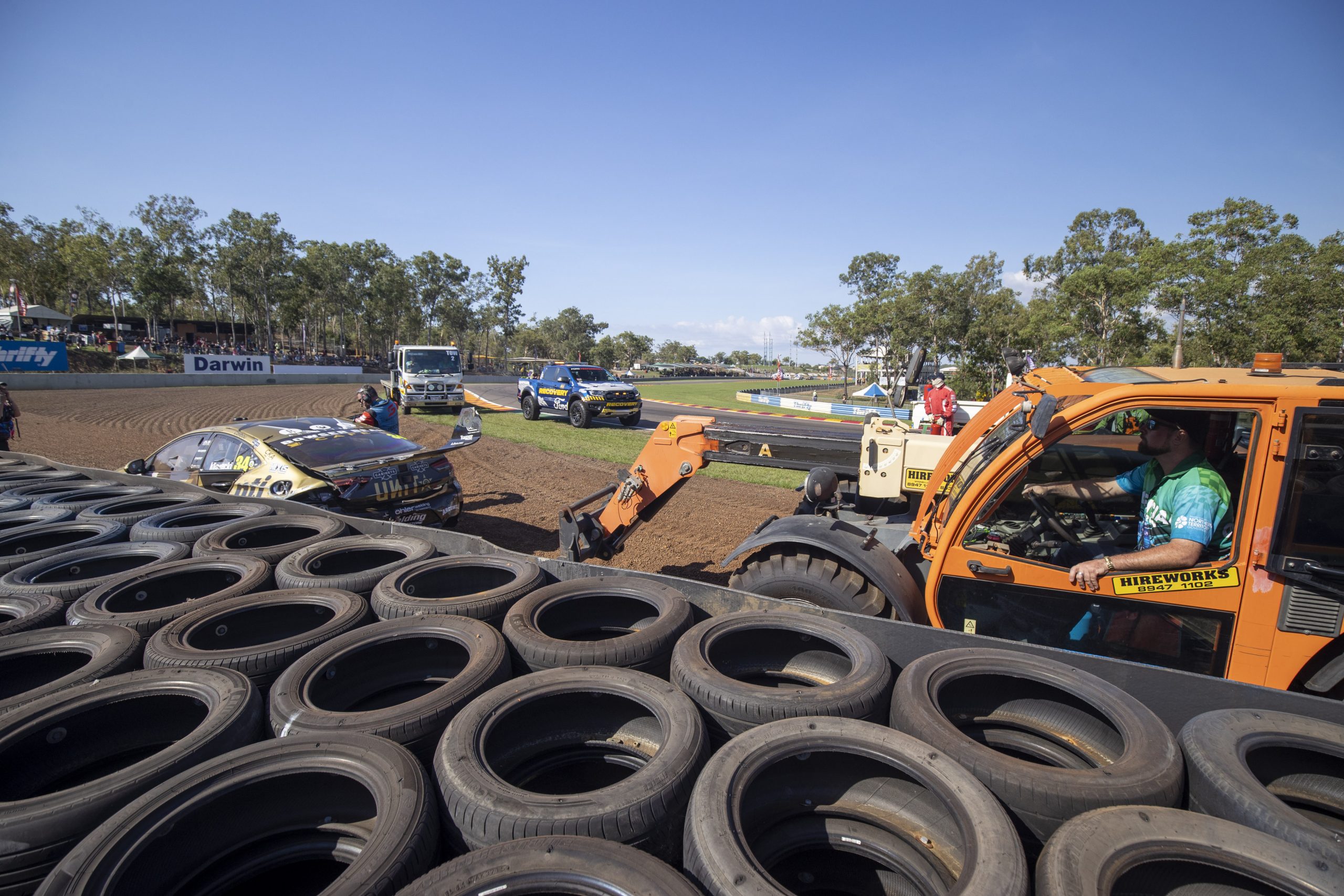 “Generally speaking, we carry spares of everything but a chassis. The only game-stopper is chassis damage.

“Fortunately, we haven’t had to deal with it yet, but you see with other teams, they’ve had to cut a chassis up and repair it to some extent at the race track.

“If the chassis is okay, then there’s not much my guys can’t fix.”

Still, facing a late night due to other drivers’ exploits left a bitter taste in mouths at MSR, with Kostecki eyeing his maiden top 10 finish.

While the accident was a setback, Stone was delighted his team dug deep to have Kostecki ready for Sunday’s action.

“There’s not many people in motorsport that aren’t familiar with that situation,” he said.

“Every member of the team is there to go racing; shunts are part of it, but everyone knows the drill.

“You assume the car is repairable, and you go flat out trying to repair it - and that’s what we did.”

As fairytales come, MSR had one on the Sunday, with Kostecki scoring a career-best finish in the second race of the day.

Having witnessed the crash on TV and received a damaged car on the back of the truck, Stone - as team owner - prepared his team for the worst outcome.

The team’s efforts saw the car repaired in time and Kostecki’s recovery was proof hard work can be rewarded, regardless of the adversity.

“If things are broken beyond a safe point - which thankfully doesn’t happen often - then you need to get everyone together and admit that there’s only so much you can do,” Stone said.

“But everyone’s always prepared to get in there and do whatever it takes to get the thing fixed.

“That result was a good reward for a hard repair.

“We’re there to get results all the time, but it’s a bit sweeter when you have to fight for it like we had to."