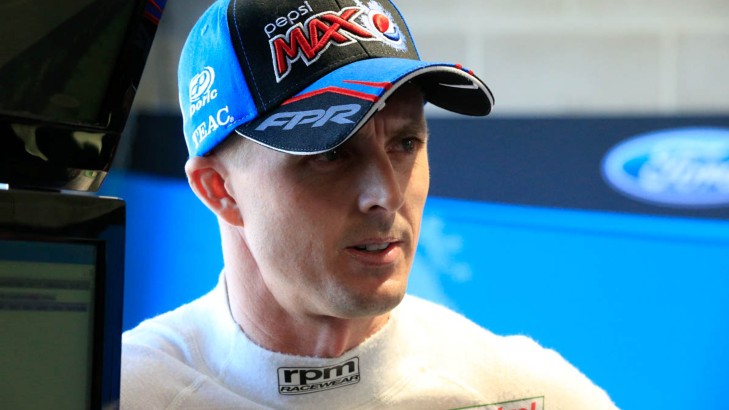 Mark Winterbottom comes out of the Castrol Townsville 500 continuing to lead the Championship, but the pressure is on FPR to find car speed after a downturn for the Ford team.

'Frosty' was uncharacteristically in the mid-pack in each qualifying session and despite the team's positivity around a better setup on Sunday, car #5 missed the ARMOR ALL Top 10 Shootout, relegated to 12th on the grid.

Varying race strategies shook out during the 250km Sunday extravaganza around the North Queensland streets, and Winterbottom managed to come home sixth, ahead of his teammate Chaz Mostert, who he double stacked behind on a lap one pit stop.

Jumping out of the car, the Pepsi Max driver wasn't sure how he'd gotten there -but he was certain about one thing: The team needs to find speed if it wants to continue to contend for the Championship.

"We need to get quicker -there's no point worrying about points until we can start winning races again," Winterbottom told v8supercars.com.au as he took his helmet off.

Championship challenger Craig Lowndes found out just how quickly a large number of points can slip away, tumbling down the order from second to sixth after a horror weekend.

Now it's his teammate -five-time defending champ and long-time Holden rival Jamie Whincup -who Frosty has to stave off, with the gap at a mere 96 points after another superb showing from the Red Bull racer.

"There's no use worrying about points," Winterbottom continued.

"If it was the last race of the last round of the Championship you'd worry about it, but you can make 100 in a weekend. If we're slow, we need to get our speed back to where it should be."

He is confident FPR will be back at the standard expected for the next event, and praised the team's work over what was a tougher weekend in Townsville.

"We had to queue in the pits so you sort of go a bit far back from there, but just tried to salvage something to the end.

"I'm not sure how we ended up jostling positions and ended up sixth, tyres were gone at the end, but good to salvage something and a good team effort there at the end."

The next event at Queensland Raceway, the Coates Hire Ipswich 400 from August 1-3, diverts back to the SuperSprint format and uses only Dunlop soft tyres.

"I think Willowbank (next round, at Queensland Raceway) will suit us.

"But hard tyre pace -we've got issues at this track (Townsville) -but we need to make the car quicker...

"There is no doubt there is work to be done on the hard tyre, especially in qualifying. Our speed needs to be better without doubt."

"We recovered well but we put ourselves into positions we should never have been in.

"Qualifying needs work, as does our hard tyre pace so we'll be focusing hard to improve these deficiencies."

The team will get another crack on the hard tyre at the mixed tyre event at Sydney Motorsport Park, before having to use the compound exclusively at the Wilson Security Sandown 500 and ever-important Supercheap Auto Bathurst 1000.

Edwards was proud of his two drivers' performances after Saturday's race -particularly Mostert's ability to keep the Red Bulls behind his Falcon in Race 21 -and Winterbottom also praised his young teammate's ability, as the Championship heads to the track Mostert earned his first V8 Supercars victory last year.

"Chaz did a really good job in quali... It was good to watch Chaz fight (on Saturday) - I had the best seat in the house. He held on and didn't make a mistake."

The V8 Supercars will be back on track at the Coates Hire Ipswich 400 from August 1-3. Can Frosty hold on to the Championship lead, or will Whincup continue to creep closer at a circuit where he claimed a win last year? Secure your tickets now.

Whincup storms back in Townsville

Mark Winterbottom  ›
15' Red Bull Racing Australia ›
Stay In The Know
Sign up to the Virgin Australia Supercars Championship Newsletter
We use cookies to ensure that we give you the best experience on our website. If you continue to use this site we will assume that you are happy with it.Ok