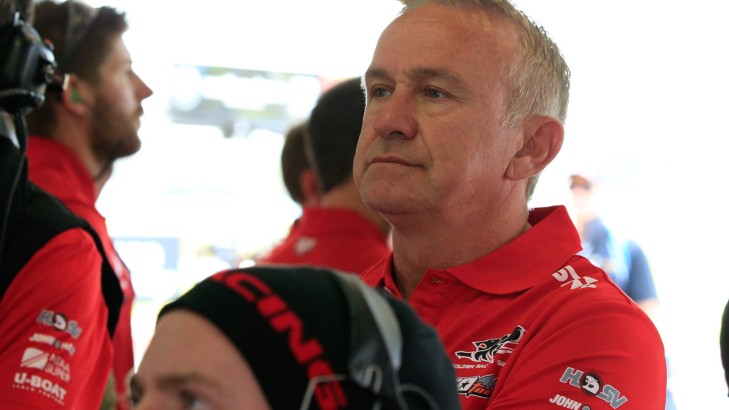 Having Russell Ingall step in to lend a hand during the Nissan Motorsport test day proved a worthwhile exercise, according to Todd Kelly.

“We’ve raced against him our whole careers and rubbed wheels,” Todd said.

“There’s a lot of people who have had good experiences and bad experiences with other drivers in the category over the years – Russell is one of those guys Rick and I have always had respect for and have never had any run-ins on the track.

“We’ve always had quite a good relationship with him, so it’s pretty handy to have a guy like that to have to a test day, jump in the car and have a bit of fun.

“But more importantly have experience in all different cars up and down pit lane now and share feedback with us on where we’re at, so it really worked out well … it was really good actually.”

Kelly wouldn’t say whether Ingall was in-line for a co-drive – “you’ll have to ask Rick!” – but was pleased with the progress the four-car group made on the recently resurfaced circuit today.

“It’s a little bit hard when the track is so good because we race on a lot of circuits that are extremely low grip, which produce specific problems normally with the cars – it’s hard to replicate and then be able to test things and fix that,” he said.

“It’s probably one of the highest grip circuits we go on now … but nevertheless we still got through most of the plan.”

Even a little bingle for Rick’s car, hitting the wall near the end of the day didn’t prove too big an issue.

“We had a bit of a problem with the steering in his car, which was right at the worst possible moment … it was quite frustrating, because it could’ve happened anywhere on track.

“We were quite concerned because the car was fairly damaged, but we got it back to the garage, got the front spoiler off and everything, and the car’s pretty good. So we were incredibly lucky to get out of that.”

Another team running a special guest was Preston Hire Racing, with six-time champ Jamie Whincup and engineer David Cauchi down for the day to help provide direction on the Triple Eight car.

It was a boost for driver Lee Holdsworth, whose feedback lined up with Whincup’s and feels he will now be in a better position for the next round in Perth, as well as the upcoming Winton event.

“Very pleased with the day – we made good progress with the car, certainly learned a couple of things and it was good to have Jamie and Cauchi come down,” Holdsworth said.

“Karl [Reindler, co-driver] was out there for a few laps, but unfortunately he didn’t get many because we broke a header at the end of the day and that sort of ended our day … we had dramas before he jumped in so he only got four or five laps. But Jamie and I got plenty and we’ve definitely made in-roads on our setup.

“Really pleased to come away with better knowledge of the car.”

Wilson Security GRM hit the track off the back of its Phillip Island victories, and team boss Garry Rogers believed it was a productive day and reported no bingles or issues. Championship drivers Scott McLaughlin and James Moffat did not share their cars, he said – they were focused on other things than co-driver miles.

“We went there to try … a few mechanical bits and pieces to the cars, both our Dunlop Series and main series cars, and that’s what we did,” Rogers said.

“We were happy enough with the end result that came out of it all – I know that’s a bit grey, but really that’s about what it is.

“We didn’t really go there with any real, specific focus, we just went there to put into practice what we’d been looking at and fiddling around with.”

The Holden Racing Team also tested with its co-drivers, but did not wish to provide any further comment about the day.