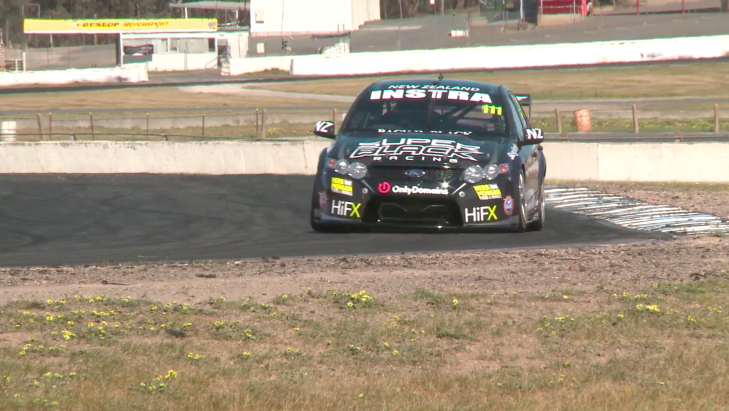 Young guns Andre Heimgartner and Ant Pedersen have both been behind the wheel of the Super Black Racing Falcon this morning, as the wild card entry prepares for Bathurst at a Winton test today.

"I've been waiting for this day for months!" Hahn told v8supercars.com.au.

"We were up at 5.30 this morning and drove out to Winton, and the boys were pretty pumped. The whole team is excited really, because today it becomes pretty real with the car out on the track. We're all pretty excited about it."

The wild card entry was announced back in July, with drivers Pedersen and Heimgartner clarified at the Queensland Raceway event in August.

"Both guys have had a run this morning, we started the car for the first time and both Ant and Andre are pretty happy," Hahn said.

Having an alliance with Ford Performance Racing - which prepared the Falcon, that last ran as Chaz Mostert's car at the Australian Grand Prix and functions as one of the team's spares - means key personnel such as Team Manager Chris O'Toole and Race Engineer Nathaniel Osborne are helping run the day.

Mostert has even made a guest appearance, coaching the Kiwi drivers and giving them some tips on setup when Hahn spoke to v8supercars.com.au.

"It's been great having Chaz out here," Hahn said.

"Today is really all about the drivers getting used to the car.

"There's still some bedding in to do and we've still got a bit of development work, but we're going to move forward on that and they're just going at their own pace. But we'll slowly build on that towards the end of the day."

Hahn believes working with FPR - which won the Supercheap Auto Bathurst 1000 with Mark Winterbottom and Steven Richards behind the wheel - puts Super Black in a good position to show its potential come the Great Race.

"We've got a good combination of drivers and expertise so we're really lucky and comfortable with FPR and what they've done today. So we're quietly optimistic with how we run."

Representing New Zealand, the team is keen to do its home country proud at Mount Panorama.

"V8s and Bathurst, we've watched it for 30 or 40 years, so it's very much a part of New Zealand and a part of our DNA - so it's great we've got another national team out here again and running through it.

"Bathurst is the biggest event on the calendar, so we're not here fur just a barbecue, we're coming to give the hill a good nudge."

Stay tuned to v8supercars.com.au for more info from the Super Black test day.