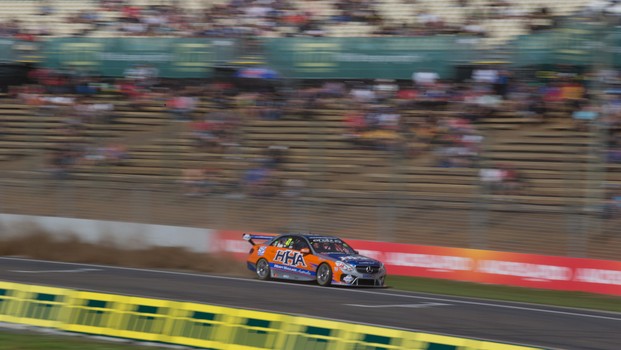 Tim Slade’s car sat out of both Qualifyingsessions today after an accident on his first timed lap at the ITM 400Auckland.

The Heavy Haulage Australia RacingMercedes-Benz E63 AMG V8 Supercar found the wall and while the crew was hopefulto repair it for the second qualifying session, the timing of two 15-minute back-to-backsessions with a 10-minute window between, just wasn’t enough.

According to Slade’s engineer WesMcDougall, the accident meant suspension damage on the left of the car.

“It was Tim’s first timed lap for the sessionand he locked rear brakes going into turn five,” McDougall explained after the Top 10 Shootout had run this afternoon.

“It’s looking fine – there was maybeeven an outside chance we could’ve gotten it ready for the second qualifying session,but we didn’t have a chance to align the car or anything, so we just had tomake it right for the race... We’re using the time to the full.”

At that stage, the team was about to alignthe car, to ensure the wheels were pointing in the right direction, and checkthe corner weights.

“We were lucky there wasn’t body damage, itwas just suspension components, so we carry those with us and we bolt them onas required.”

McDougall said the team had positive hopesfor the afternoon’s races.

“It’s going to be new for everybody, sostarting at the back there we’ve got nothing to lose.

“This place is usually quite hard on tyres,so we’ll try and play the long game, and try and make it through each of thefour races.”

McDougall said the situation regarding tyreallocation would become clearer tomorrow.

“(The allocation) probably is (quite tight)not to be allowed pre-marked tyres before we got here to use in that firstsession – that would have been helpful to learn the track.”

Slade’s car will be on track forChampionship Race Six this afternoon, which starts at 1.10pm New Zealand time.

Tim Slade  ›
2013 ITM 400 Auckland  ›
Stay In The Know
Sign up to the Virgin Australia Supercars Championship Newsletter
We use cookies to ensure that we give you the best experience on our website. If you continue to use this site we will assume that you are happy with it.Ok