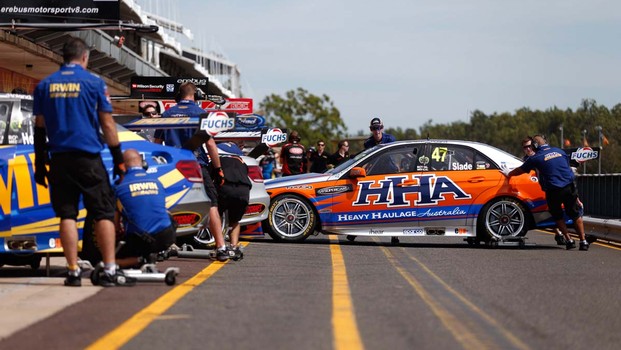 It was an exciting afternoon for ErebusMotorsport V8 yesterday as Tim Slade recorded the first top 10 finish for aMercedes-Benz E36 AMG V8 Supercar.

Following Slade’s second place in FridayPractice, he was quick to talk down his chances for the races.

But the performance carried through to thefirst race of the SKYCITY Triple Crown in Darwin, as Slade recorded a greatresult in the new manufacturer’s Car of the Future V8 Supercar.

“I think it’s probably the best sixth placeis going to feel for me!” Slade said post-race.

“I’m super happy – more so foreveryone in the team. It’s a little reward for their hard work, basically sincethe end of last year.”

Post-race Slade was pleased with the event sofar and said it was no secret it had been a struggle for the team – upuntil that point.

“We knew the areas we were lacking in, butit took lots of work to get to this point and I guess we have improved a lot ofthe areas of the car – but we’re still lacking quite a bit in one major area.”

It seems the team’s recent test has improved the E63 AMGs – and Slade is glad the team has had the chanceto taste success.

The Heavy Haulage Australia Racer explained hiscomments after Friday were purely because of the tyre differences across thefield – and knowing there were teams you could never write off, despitetheir poor showing in Practice times.

“But we have had really good quality pace,so I wasn’t getting too far ahead of myself (on Friday)," he said.

“In terms of qualifying we were extremelyclose – only four-thousands of a second off getting in the top 10.

“We could’ve quite easily been in the top10 in qualifying if I’d put it all together, and the car probably wasn’t quiteas good as what we had (Friday).

“That was pleasing, to know that wasachievable.”

Amazingly, only three-tenths of a secondcovered the cars from the fastest to where Slade qualified, 13th position.

During the race Slade was turned around at turn five – an incident under investigation – whichcaused him to drop back in the pack.

“The car was quite good though, I managedto get a lot back before the start of that half-time break,” he explained.

“The start of the second half I got anawesome start, I think we started 23rd and came around the first lap in 10th soI think that’s my PB for positions gained in a first lap.

“Not that you want to be doing that, comingfrom so far back, but from there a few more dropped off in front and wemaintained our position, pulled away from the guys behind … so it’s pleasing.”

Though again he didn’t want to get ahead ofhimself, Slade was looking forward to running the soft compound tyre in theraces today as he felt the car was better on the soft tyre.

“In saying that, not everyone ran softtyres (on Friday), so it’s hard to gauge.”

Tim Slade  ›
15' Erebus Motorsport ›
2013 SKYCITY Triple Crown  ›
Stay In The Know
Sign up to the Virgin Australia Supercars Championship Newsletter
This website uses cookies to improve your user experience. By continuing, you will be providing your consent to our use of cookies.Ok