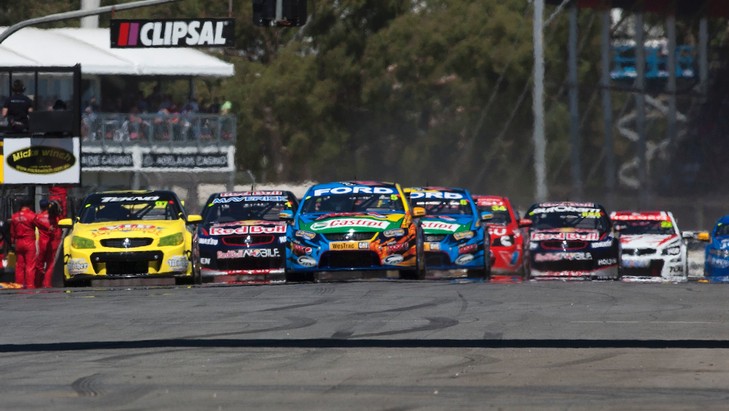 V8 Supercars driver Tim Slade is predicting the 2014 Clipsal 500 to be one of history’s best.

A format shake-up for the street event in Adelaide means two races, both with points on offer, will be staged on Saturday.

South Australian-born Slade visited the track today to mark 50 days until the grueling 500km event, where he will line-up with new team Supercheap Auto Racing.

“This year’s Clipsal 500 is going to be one of the most exciting in the race’s history and I can’t wait,” Slade said.

“125km is a really good distance – it’s long enough to ensure positions on the track will most certainly change but short enough that drivers will have to really race the entire time which is ultimately what the fans want.”

Sunday’s race format will see the V8 Supercars lining up for qualifying, the ARMOR ALL Top 10 Shootout and the final 250km leg of the Clipsal 500 Adelaide.

On Friday, fans will be treated to a host of race action in the evening with Aussie Racers, Touring Car Masters, Dunlop Series and Porsche Carrera Cup all on show after 5pm.

“This wasn’t a decision we made lightly,” Warren said.

“We took into consideration extensive feedback from our fans who felt V8 Supercar racing needed a shake-up. The idea of two shorter races was well received as it provides more starts and finishes, and more on-track action and entertainment for fans.

“With the new racing format, fans will get to see two V8 Supercar race starts, two finishes, and the drivers going flat out with valuable Championship points awarded for each 125km race on Saturday afternoon and evening.

“The race will also see the debut of Volvo into the competition which is another first for Adelaide.”

Since the first V8 Supercar race was held in Adelaide back in 1999, the Clipsal 500 has transformed into an entertainment mecca.

Over four days, the 2014 Clipsal 500 Adelaide will feature a feast of high octane entertainment action including V8 Supercar action on Friday, Saturday and Sunday, feature race categories across all four days together with on-circuit entertainment and exciting on- and off-track events, including the return of the Touring Car Masters, which are back by popular demand.

The New Holland Tractor Pull will feature for the first time at Clipsal 500 when the event will showcase the 6th round of the Australian Tractor Pull Championships; a fully sanctioned point’s event.  The dirt and diesel fest has been in Australia for over 30 years but this is the first time in a capital city. Adelaide can look forward to seeing the sights and smells of high octane blown big block tractors and highly modified diesels pulling huge sleds almost to engine explosion. In 2014, there will be eight different classes of tractor competing for titles.

In addition, leading international and Australian artists who have become regular fixtures across the event’s concert fixture will again close each day’s action on Friday, Saturday and Sunday.

After hugely successful 2012 and 2013 performances at the Clipsal 500, Bands On Track presented by Music SA will return to showcase some of SA's most exciting new and emerging local bands on the Clipsal 500 bill.

Warren said one of the key ingredients to success for the Clipsal 500 is the preparedness to innovate, re-invent and improve the event each year.

Tickets are available now for the event through Ticketek.