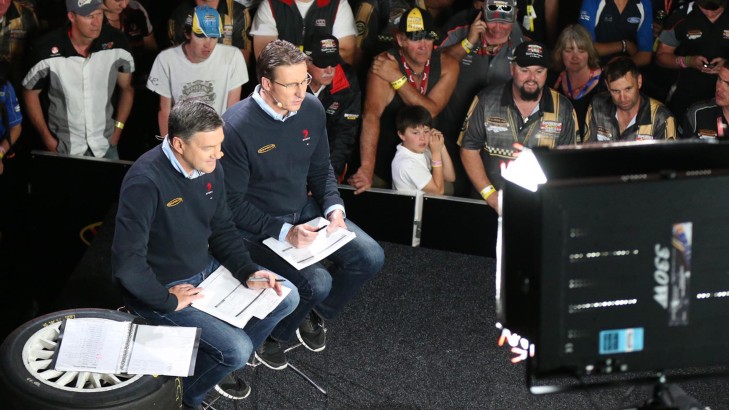 Five-time Champion Mark Skaife empathised with Jamie Whincup's decision to block out his team's calls for fuel conservation in the closing laps of the Supercheap Auto Bathurst 1000.

While calling the race in the intense final stages, Skaife was sure the current five-time champ had a radio issue and was not hearing the pleas from his engineer David Cauchi. However, when the situation became clear, the Australian motorsport great seemed to understand what Whincup was doing.

"Sometimes it's hard with those things," he told v8supercars.com.au.

"Sometimes ... when you're in the heat of the battle, you know, I've had to do that once or twice and they're hard.

Skaife said he had never seen anything like last week's Supercheap Auto Bathurst 1000, which will go down in history for many reasons.

Eventually won by young gun Chaz Mostert and Paul Morris - coming from the back of the grid, and going into the tyre barriers during the race - Skaife branded the eight-hour thriller unbelievable.

"Second attempt at Bathurst, for factory team two in a row, man it's extraordinary ... That was a great drive."

Ford Performance Racing boss Tim Edwards had hope the team would take the back-to-back title in those closing stages - and again, it came down to the team's unanswered pleas to Whincup.

Once he heard current team boss Mark Dutton - Whincup's recently promoted engineer from his five titles - he could tell the situation could be costly for the Red Bulls.

"Listening to them talking to Jamie in those last few laps - when Dutto got on the radio and took control - we knew they were tight," Edwards said.

"They were pleasing with him to slow down and we charged on ... we knew we could just go as hard as we could.

"I think Chaz had run out of tyres a bit, but he was still monstering everything he could out of it and we got there."

Fans voted on v8supercars.com.au this week - and the young gun and 'The Dude's' win was a resounding favourite moment from the Supercheap Auto Bathurst 1000.

Relieve the best parts of the Great Race here - as we head to the Castrol EDGE Gold Coast 600 next weekend for the final chapter of the Pirtek Enduro Cup.

Some will redeem themselves, others may not. Only one thing is guaranteed - it's esay to find the wall at the concrete-lined Surfers street circuit. It caught out plenty in 2013 - how will your favourites go?