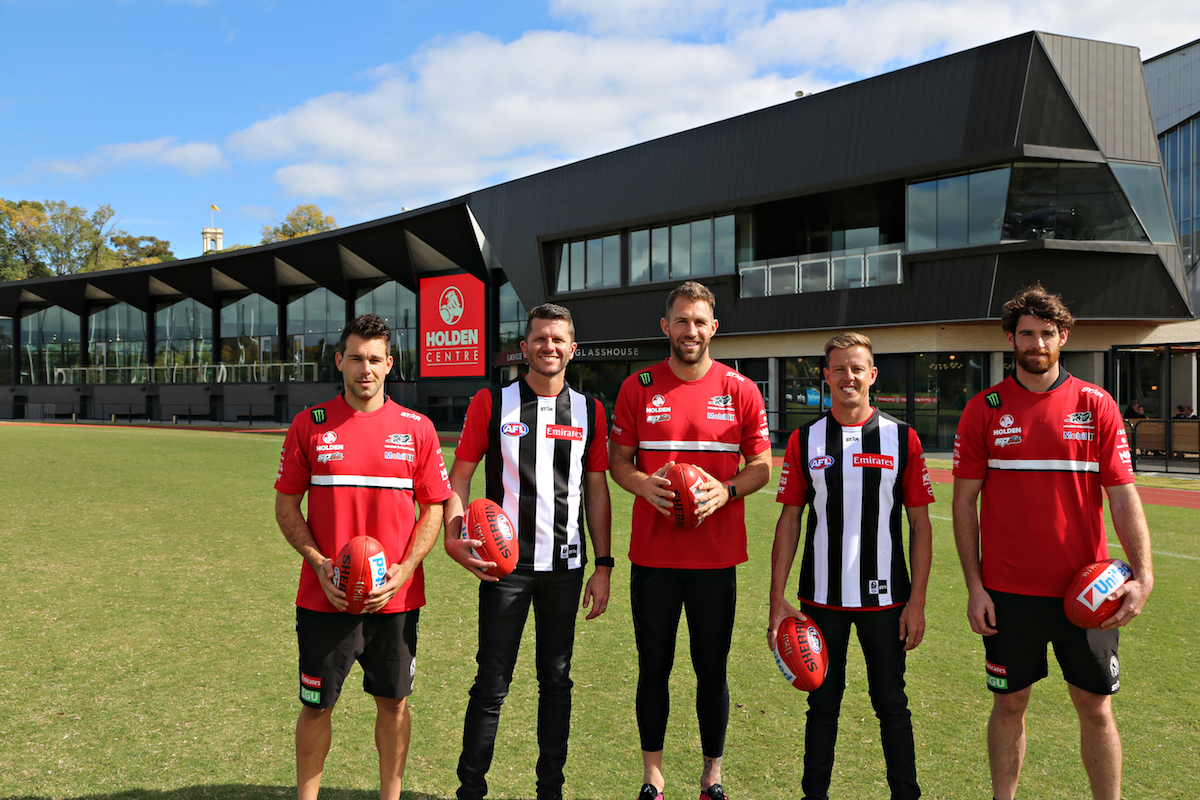 It was black and white for Holden this afternoon, when Holden Racing Team champs Garth Tander and James Courtney caught up with Collingwood Football Club stars at the Holden Centre.

The athletes traded tips and jumpers ahead of this weekend’s contests, when the V8 Supercars hit the track at the WD-40 Phillip Island SuperSprint and Collingwood takes on Melbourne at the MCG.

AFL players Travis Cloke, Tyson Goldsack and Levi Greenwood joined the HRT drivers, having a bit of fun aiming to kick Sherrins into the back of parked Holden Colorado at their training ground.

The Collingwood players pulled on red HRT shirts and presented the V8 Supercars stars with guernseys emblazoned with numbers 2 and 22 ahead of their clashes this weekend. 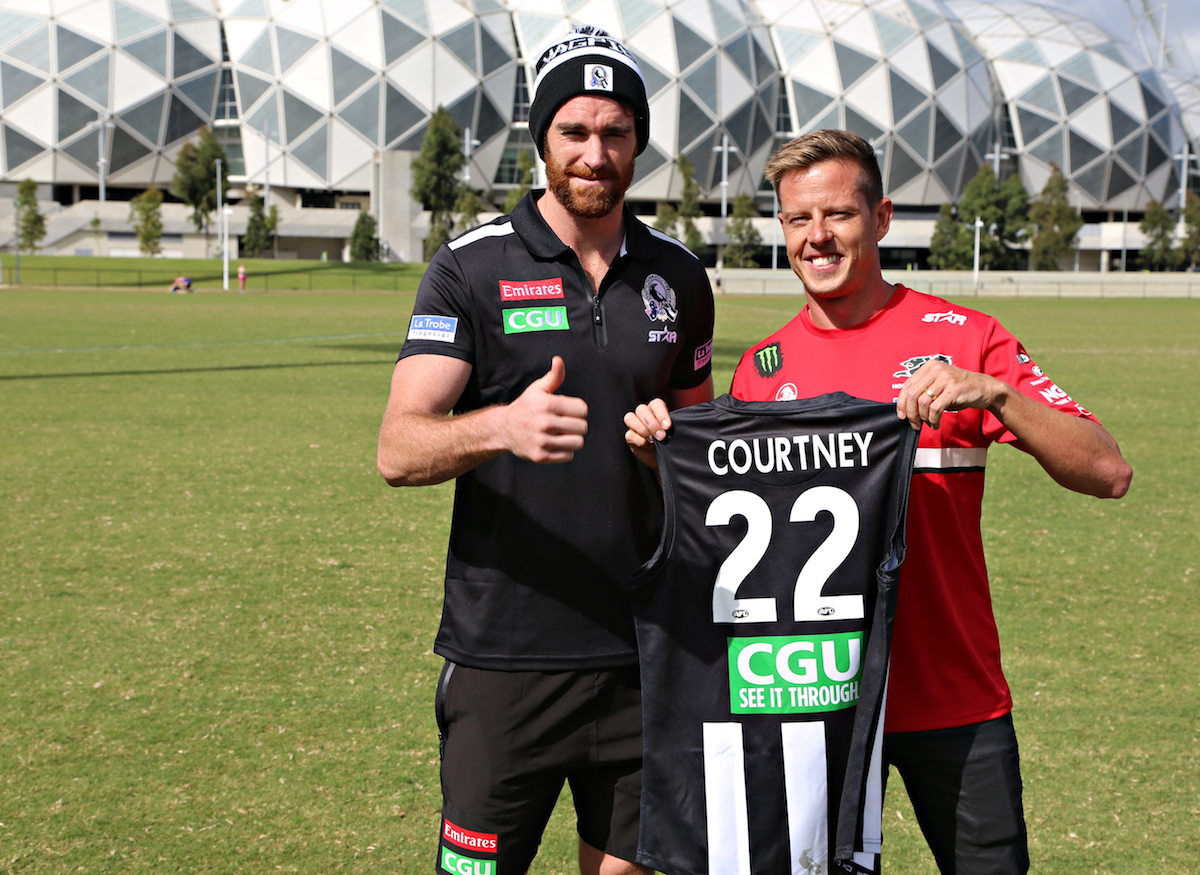 V8 Supercars star Garth Tander is looking forward to getting behind the wheel at the circuit he was crowned champion in 2007.

With five winners from five races so far this season, Tander acknowledges the category is as close as ever as he pushes for his first win since 2014.

“You need to be consistent and consistently near the front, that’s what makes the championship so demanding,” Tander told v8supercars.com.

“[We’ve had] different types of events – Adelaide’s a different event to what we saw in Tassie, and Phillip Island will be different again.

“Although the format is the same as Tasmania the tyre is going to be different, so there will be other cars that have strengths on the hard tyre and strengths at a fast flowing circuit like Phillip Island.

“It does illustrate you need to be strong in all disciplines because consistency is key.” 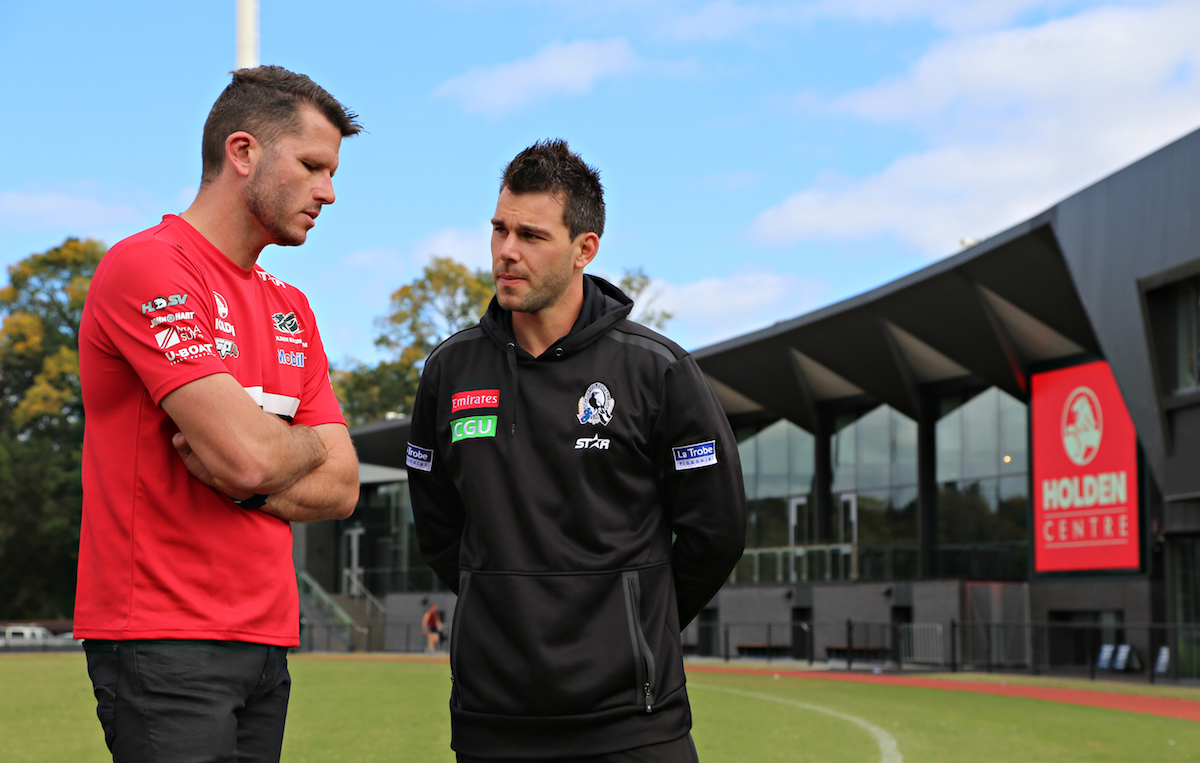 Tander sits fifth in the championship despite a tougher run in Tasmania than the team had hoped for.

A seasoned veteran, he knows there are still plenty of miles to race and is focused on delivering this weekend.

“At the end of the day it’s a very terrible sporting cliché, but it’s one race at a time. At the moment we just want to win races and worry about the championship later.”

He believes this weekend’s racing at the WD-40 Phillip Island SuperSprint will be exciting with a longer pitstop race on Saturday.

“I think the format is better, I like it.

“We saw last year – particularly at Phillip Island – the shorter races are just very processional once the first lap is over and done with … the pit stop just adds an element of strategy to it.

“Certainly at Phillip Island on the hard tyre there will be a little bit of tyre degradation, so that will make the strategy interesting even on Saturday with the shorter race.”

Click here for all the details on this weekend’s WD-40 Phillip Island SuperSprint, which will be aired live on FOX SPORTS.