Shell V-Power Racing's Fabian Coulthard and Scott McLaughlin put the team's new Ford Mustangs at the top of the order in third practice at the Superloop Adelaide 500.

A 30-minute session was the last outing before this evening's ARMOR ALL Qualifying, setting the grid for Saturday's first race of the year.

Jamie Whincup took third in the best of the Holdens, ahead of Nick Percat, while Shane van Gisbergen was 12th.

Coulthard led the way after the first runs with a 1:21.0296s, which was displaced by McLaughlin's 1:20.9098s approaching the halfway mark.

McLaughlin lowered the benchmark with nine minutes remaining, but was then bumped down by efforts from Coulthard and Percat.

A 1:20.3923s from Percat's National Pharmacies Commodore was still the time to beat with one minute left on the clock.

McLaughlin was the first to improve, moments before Coulthard turned his session-topping 1:20.1140s.

"It’s all about knowing what you’ve got," Coulthard said of using two sets of green tyres.

"I just needed to get a bit of confidence back, that’s definitely the way to do it.

"The car’s been good all weekend, we’ve been there or thereabouts, I just need to do it when it counts."

Whincup was within a tenth of the ultimate pace in his Red Bull Holden Racing Team Commodore, after a late flier. 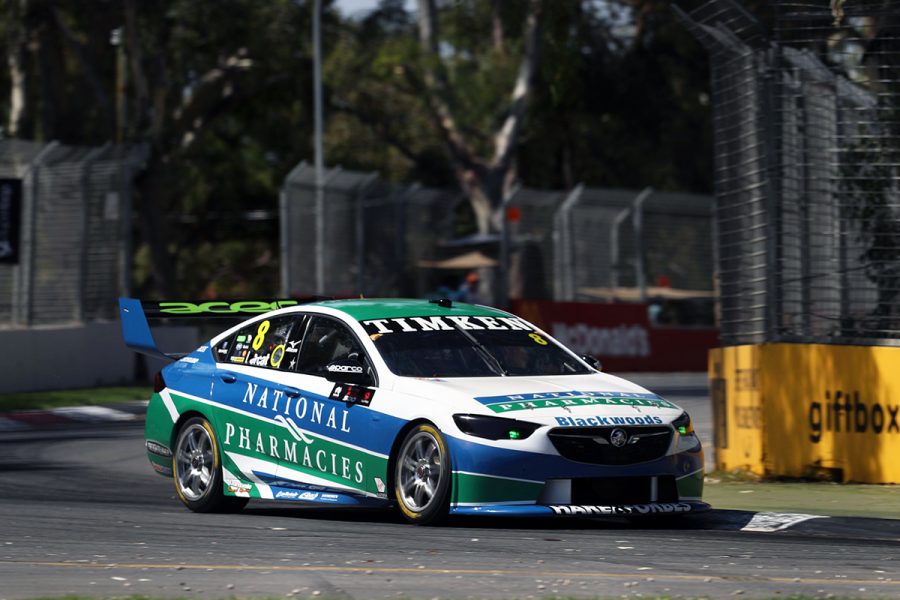 "The car rolled out well. It’s what we finished with, we just didn’t put a new tyre on it in the practice this morning," Percat said.

"[We made] a few little tweaks to the car for that session, ran obviously a decent tyre, but were still even a step behind Sladey in terms of tyre quality, so we were surprised to be floating around that top six.

"Then obviously the first to go and probably show where the track was at and it was good. Obviously we’re both learning together, he obviously tuned his up at the end and was quick.

"We made another little change for that last set of tyre and it nearly hung on.

"I think we were quite quick all the way to Turn 11 and I made a little mistake, I got a bit greedy coming into the parklands, but better to find out now than later."

They were split by Chaz Mostert in fifth, with Tickford Mustangs also occupying seventh and eighth with Will Davison and Cameron Waters.

Thursday pacesetter Anton De Pasquale bounced off the tyres at Turn 4 on his way to ninth, with the sister Penrite Racing Holden of David Reynolds 13th.

This year's other debutant, Garry Jacobson was the fastest of the Kelly Racing Nissans in 17th, one spot ahead of Andre Heimgartner who found the Turn 4 tyres.

Drivers will be back in action for ARMOR ALL Qualifying for Race 1 of 2019 at 6:25pm local time.