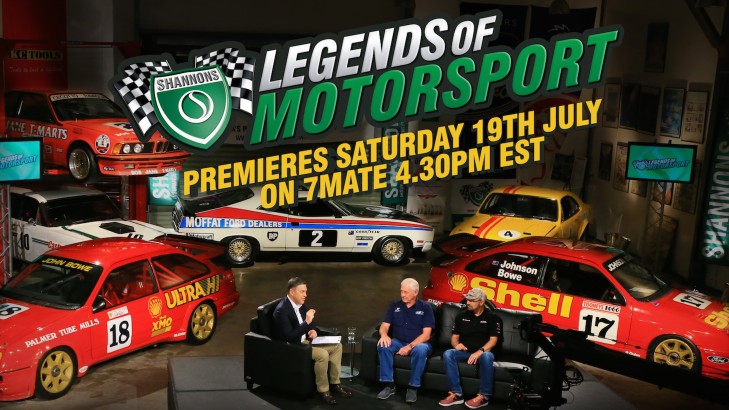 In an entertaining 12 part series Neil Crompton, Australia's premier motoring commentator, brings to life the history of Australian Motorsport with rarely seen historical footage from Seven's extensive archives dating from the '60s to the '90s.

In front of a live audience Neil Crompton talks with a host of legends, including Allan Moffat, Dick Johnson, Kevin Bartlett, Fred Gibson, John Bowe, Allan Grice, Jim Richards, Larry Perkins, Mark Skaife and many more. They reflect on the cars they drove, the great races and the crashes that all contributed to Australia's amazing motorsport history.

'Shannons Legends of Motorsport' will take you behind the scenes, to get the real story of some of the greatest moments in racing history. Neil Crompton's passion and knowledge of motorsport is widely recognised and when developing the new series, he found the perfect partner in Shannons.

"The Shannons Legends of Motorsport is a very exciting project for me," Crompton said.

"It blends wonderful historic imagery from Seven's library with iconic racing cars plus the legends that drove them. Some of the material we've found is fantastic and in many cases, long forgotten and the back stories are fascinating."

For motorsport fans, this is must watch TV, an entertaining and fascinating retrospective view into some of Australia's racing champions - 'Shannons Legends of Motorsport' launching on 7mate, Saturday July 19. Check local guides for details.

16/07/2014
Stay In The Know
Sign up to the Virgin Australia Supercars Championship Newsletter
We use cookies to ensure that we give you the best experience on our website. If you continue to use this site we will assume that you are happy with it.Ok