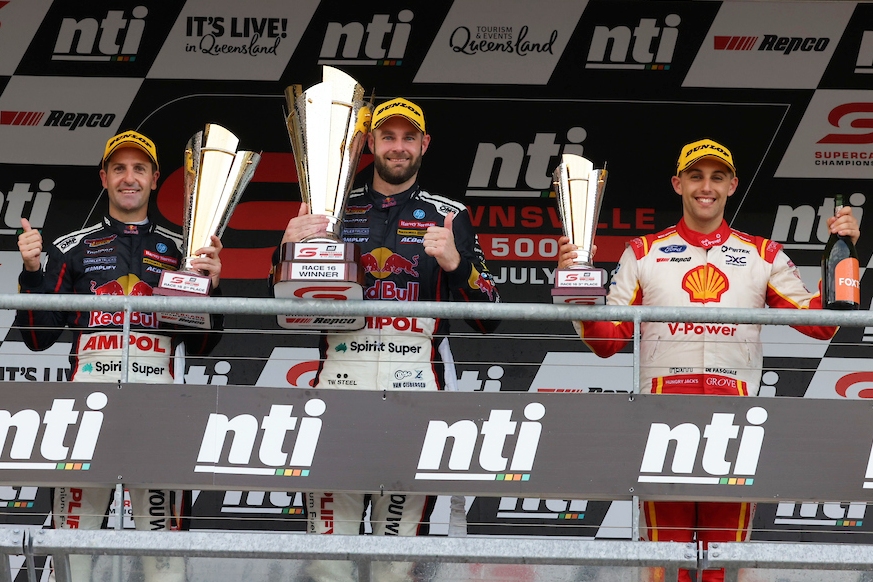 It was a weekend to remember in North Queensland for Shane van Gisbergen, who swept the NTI Townsville 500.

The 300-point weekend was his third of the year, following his clean sweeps in Bathurst and Sandown.

Of the six race weekends so far this season, only May's OTR SuperSprint at The Bend Motorsport Park went without a van Gisbergen win.

The Race 16 win was also the Kiwi's 50th in his decorated career; he joins Jamie Whincup, Craig Lowndes, Mark Skaife, Scott McLaughlin and Garth Tander in the 50-wins grouping.

Sunday also saw van Gisbergen bring up his seventh win in Townsville; of 2021 venues, it is by far his most successful.

Whincup scored his 22nd Townsville podium from 31 starts, but is now 245 points behind van Gisbergen in the title fight.

Anton De Pasquale was third for the second time in as many days, and moved up to sixth in the points standings.

Shell V-Power Racing Team teammate Will Davison was fourth, and with Chaz Mostert enduring a tough weekend, he moved up to third overall.

Will Brown scored his third top five finish of the season, with the Erebus Motorsport driver retaining 10th in the standings.

The biggest mover was Jack Smith, who rose seven spots from 24th to 17th.

Percat also dropped from sixth to eighth in the standings.

The 2021 Repco Supercars Championship will resume in Townsville next weekend at the WD-40 Townsville SuperSprint.