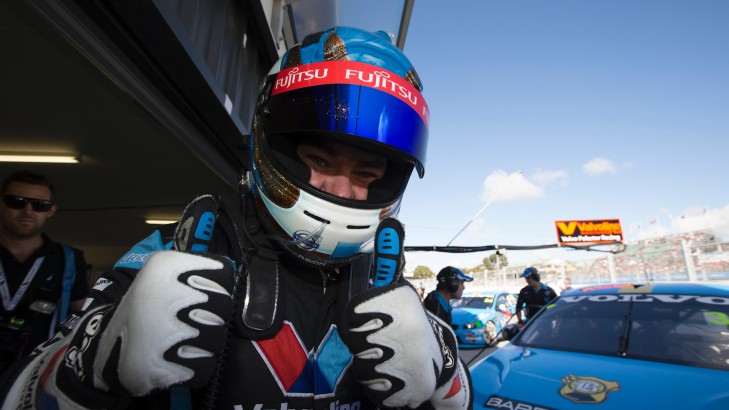 Just over a year ago, it was announced a fifthmanufacturer would be joining V8 Supercars for 2014.

Garry Rogers Motorsport would run Volvos, with a B8444S 4.4-litre production V8 engine, to be developed by the Polestar Racing arm in Sweden.

The team signed Swedish driver Robert Dahlgren to drive alongside Scott McLaughlin, who already had two Championship race wins under his belt in the team's new generation Commodore in '13.

The first public run for the Volvos, the sydney.com Test Day in February, saw both cars return to the pits with power steering niggles, though the team expressed it was not worried.

"We'll come out to Clipsal and see how we go," McLaughlin said on the test day. "You never know, we might go ok, we might not, but we'll find out."

The follow up at the season opening Clipsal 500 was extraordinary, with McLaughlin finishing on the podium after a big dice with defending Champion Jamie Whincup in the Volvo's second ever V8 Supercars race.

McLaughlin then went on to win the MSS Security Challenge Australian Grand Prix showcase, and at Championship round Winton scored his first career ARMOR ALL Pole Position in a V8 Supercar -something he had not been able to achieve in the Dunlop Series.

While often qualifying and starting up the front, that Championship race win had eluded McLaughlin.

But Barbagallo Raceway was where the stars aligned, the Kiwi racer able to cross the line first in his S60 after 100km of racing in the West, ahead of BJR's Fabian Coulthard and FPR's Chaz Mostert.

"An unbelievable feeling for Volvo to get its first win in its first year, and it's a credit to my guys (and) everyone back in Sweden," McLaughlin said.

"(It was) a big task -we're on a different hemisphere of the world and to have a car that comes out straight off the blocks, contend for wins and be up there in the Championship is a credit to everyone, and just shows how good the blokes are around me. I'm just the lucky driver that can show my talent inside a car like that, so I'm very grateful."

McLaughlin wasn't putting extreme expectations on his performance for 2014 and admits the Volvos have been further up the field than he first expected.

"I'm the first to admit I thought top 15 was a very good goal and something that I thought would be possible - top 10 would be like a Championship win.

"So to contend for wins week in, week out, is pretty awesome."

As for the 'Volvo driver' stereotype, McLaughlin loves being able to have some fun with it.

"It's good for V8 Supercars to have that rivalry and have that little bit of banter between us. If it wasn't there the series wouldn't be as good as what it is."

McLaughlin currently sits seventh in the Championship, 423 points behind leader Mark Winterbottom, as the V8 Supercars head to a track where the young gun earned a race win last season.

Scott McLaughlin  ›
15' Wilson Security Racing GRM ›
2014 Coates Hire Ipswich 400  ›
Stay In The Know
Sign up to the Virgin Australia Supercars Championship Newsletter
We use cookies to ensure that we give you the best experience on our website. If you continue to use this site we will assume that you are happy with it.Ok